Revealed: The 10 most affordable hotspots to buy a property in Britain is dominated by Scotland and the North West

The most affordable towns and cities in Britain to buy a property have been revealed.

They are clustered around Scotland and the North West, with the quaint town of Shildon in County Durham topping the list by property website Zoopla.

Meanwhile, a separate list of towns which have seen the biggest increase in affordability in the last 12 months includes the picturesque town of Cleator Moor in Cumbria, Malvern, Worcestershire and Bideford, North Devon. 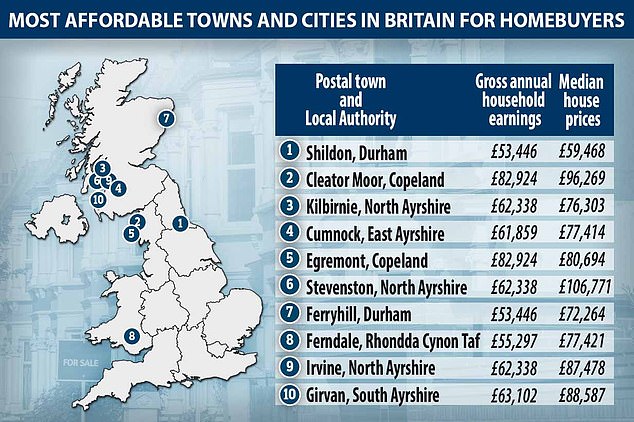 The most affordable places to buy a home in Britain, based on house price to earnings ratios, using two-earner households on average salaries for the local area 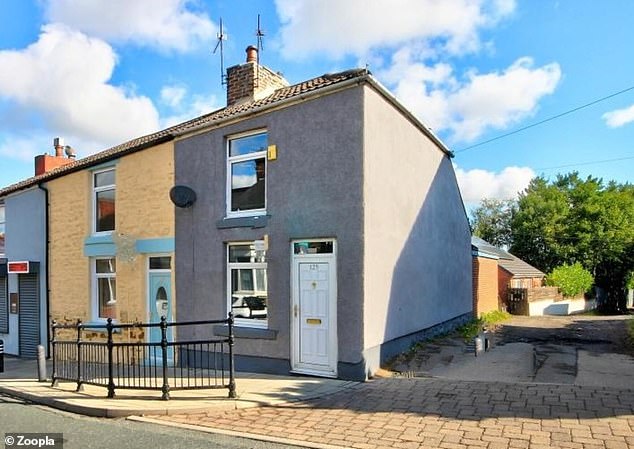 In the most affordable area: This two-bed terrace in Redworth Road, Shildon, is for sale for £55,000 via estate agents Luxe Homes

Zoopla based its calculations on house price to earnings ratios, using two-earner households on average salaries for the local area.

The average property price in Shildon is £59,468 and the price to earnings ratio is 1.1.

Ferryhill, also in County Durham, ranks in seventh place with a median house price of £72,264 and a price to earnings ratio of 1.35.

Zoopla said its lower house prices and the dominance of terraced housing was driving affordability in the area.

In Scotland, towns in historic Ayrshire dominate with Kilbirnie and Cumnock ranking in third and fourth place respectively, and Stevenston, Irvine and Girvan all featuring in the top 10.

Zoopla said that Scotland’s affordability is linked to two key factors, which are strong earnings locally and more reasonably priced property, with average house prices in all of these towns below £65,000.

Buyers in Cleator Moor and Egremont in Cumbria also benefit from high levels of affordability, according to Zoopla. 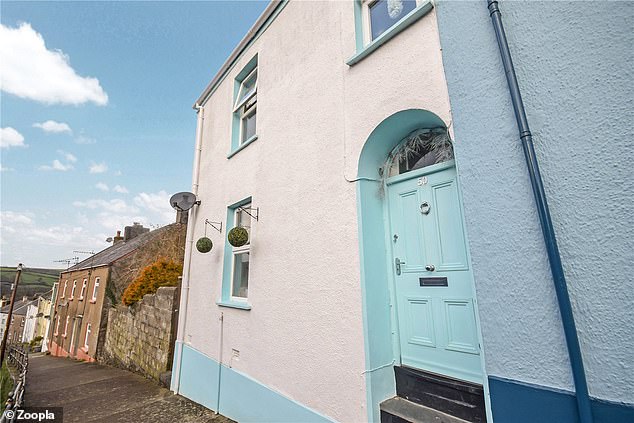 This three-bed terrace house in Mill Street, Torrington, is for sale for £180,000 via estate agents Bond Oxborough Phillips

Cleator Moor is located on the 190-mile Coast to Coast Walk that spans Northern England, while Egremont is at the edge of the Lake District National Park. Both areas have a lot to offer home hunters searching for a rural idyll, Zoopla said.

As well as featuring in the most affordable list, the property website said that affordability has also improved the most in Cleator Moor and Egremont.

Zoopla said earnings growth is underpinned by its robust manufacturing sector and the Sellafield nuclear power station, a major employer in the area. 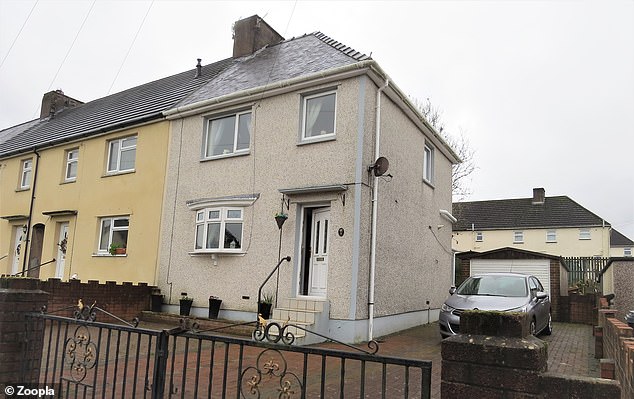 This three-bed terrace in William Morris Avenue, Cleator Moor, is for sale for £79,950 via estate agents Tiffen & Co 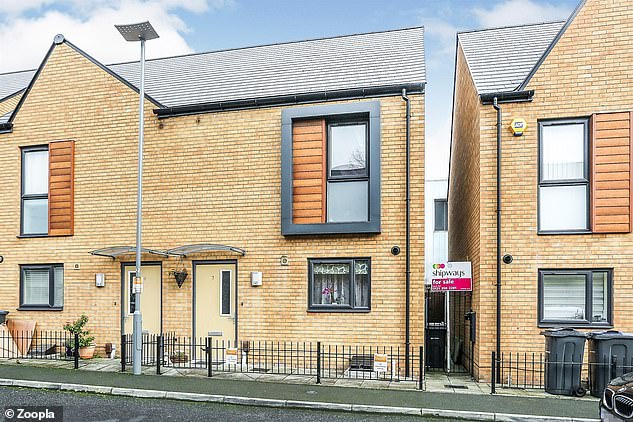 This two-bed semi-detached house in Bartons Way, Birmingham, is for sale for £170,000 via estate agents Shipways

For those on the hunt for a property near an Area of Outstanding Beauty, but at a more affordable price, the spa town of Malvern, located at the foot of the spectacular Malvern Hills has also seen an increase in its affordability.

Commuter towns such as Hoddesdon in Hertfordshire, and the Scottish town of Beith have also seen improvements. 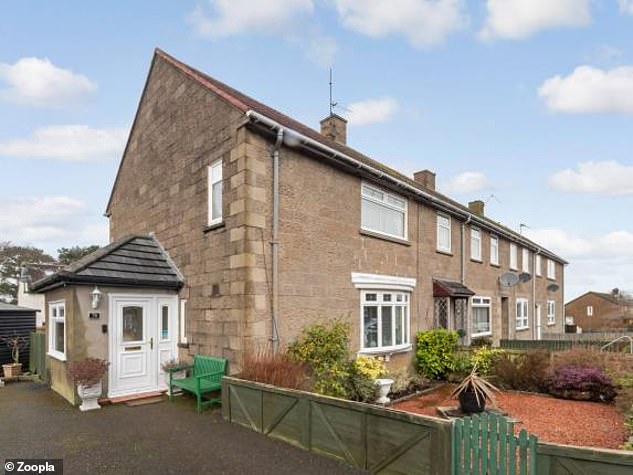 This three-bed terrace house in Lamont Crescent, Cumnock – East Ayrshire – is for sale for £70,000 via estate agents Slater Hogg & Howison

In Southern England, Hoddesdon in Hertfordshire has seen the biggest improvement in affordability with average house prices of £396,623 and a price to earnings ratio of 5.13.

With substantially lower house prices than London and direct trains to London Liverpool Street in just 40 minutes, Hoddesdon could be an attractive location for commuters looking to get more for their money, Zoopla suggested.

Nearby Waltham Cross has also seen improvements in affordability and is slightly more expensive with average house prices of £408,358 and a price to earnings ratio of 5.28, down from 5.70.

Areas in North Devon also feature strongly, with Bideford and Torrington both featuring in the top 10 list for improved affordability.

For those looking for a home near the coast, the historic harbour town of Bideford could be an attractive option with its independent shops and picturesque quay. The town has an average house price of £238,116 and price to earnings ratio of 3.86.

Although city locations are often associated with higher house prices, Britain’s largest cities all have areas with greater affordability.

In London, the house price to earnings ratio is most favourable in Barking and Dagenham at 5.4, in Bexley at 5.5 and in Tower Hamlets at 5.68.

In these boroughs, the average cost of a home is below 5.7 times the annual salary for a two-earner household’s average salary, making these boroughs among some of the most affordable in London.

Izabella Lubowiecka, of Zoopla, said: ‘The North West and Scotland dominate the most affordable areas list once again this year, with relatively modest pricing and stronger earnings in some areas making a home move more accessible for many. T

‘The data also shows that for homemovers on average salaries, mortgages are also more affordable, especially if homeowners have built up some equity in their current property.

‘These levels of affordability in some localities will be welcome news for homeowners looking to move into a larger home especially as the current lockdown restrictions start to ease.’