Mother, 21, who decided to delay cancer treatment when she found out it could harm her unborn baby reveals she was given the all-clear seven months after her little girl was born

A mum who made the agonising decision to delay cancer treatment when she found out it could harm an unborn baby has given birth – and been given the all-clear.

Ellie Whittaker, 21, from Bolsover, Chesterfield, was diagnosed with stage two Hodgkin’s Lymphoma in October 2019 when she was 16 weeks pregnant with her little girl, Connie Marriott, now eight months.

Having previously suffered a miscarriage, Ellie was determined to carry on with the pregnancy – despite being advised to undergo an abortion.

Medics told her it wasn’t safe for her to undergo chemotherapy whilst she was expecting – as the treatment could harm her unborn child.

But rather than terminate her little girl, Ellie decided to continue with the pregnancy and give birth before she started chemotherapy – giving the disease the opportunity to develop and get worse.

Her daughter, Connie, arrived by c-section on 18th March 2020, weighing 6lbs 12oz, at Jessops Wing, Sheffield, and a week later a scan revealed that Ellie’s cancer had progressed to stage three.

Ellie underwent 12 rounds of chemotherapy and she was finally given the all-clear two weeks after her final scan in October 2020. 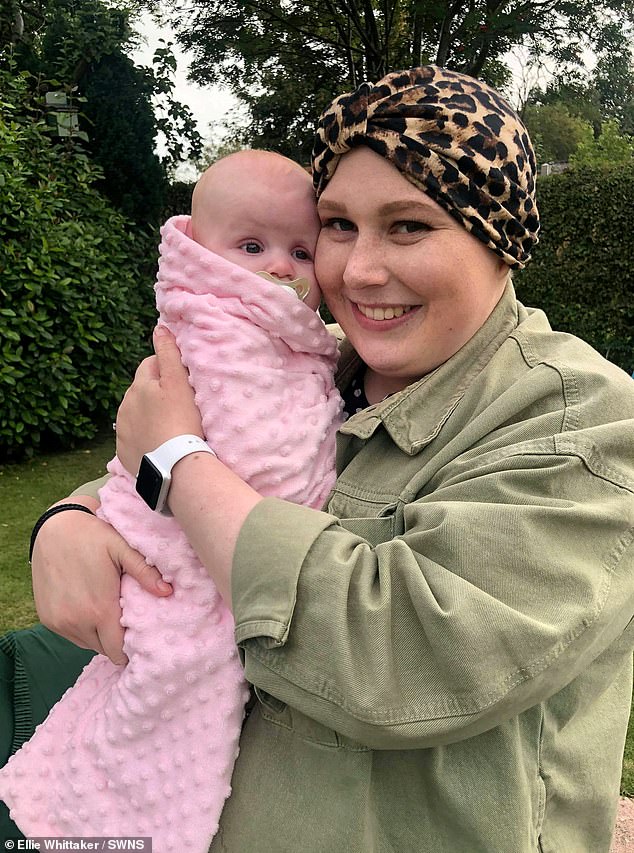 Ellie Whittaker, 21, from Bolsover, Chesterfield, was diagnosed with Hodgkin’s Lymphoma in October 2019 when she was 16 weeks pregnant with her little girl, Connie Marriott. She decided to delay her chemotherapy in order to give birth 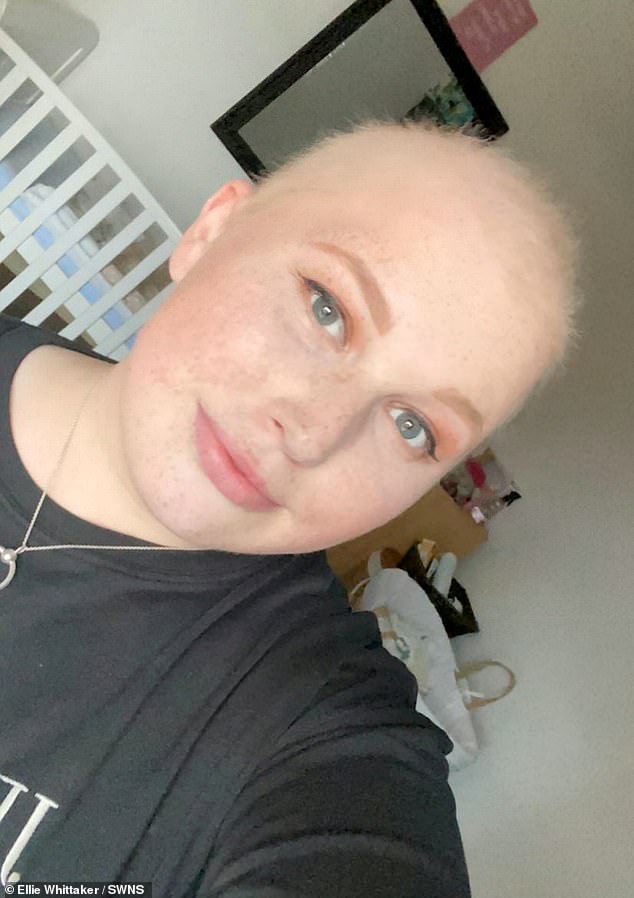 Ellie, pictured now after chemo, had already suffered a miscarriage when she heard her diagnosis, and decided to carry Connie to term in spite of doctors warning delaying chemo would have terrible repercussions on her health

The mum-of-one didn’t have many symptoms apart from a lump in her neck and feeling ‘exhausted’.

‘There was no chance on this planet I was going to abort my baby,’ said Ellie, a full-time mum.

‘I pushed the cancer as far from my mind and focused on Connie – I couldn’t wait to be a mum.

‘One week after giving birth, I went for a scan and discovered it had progressed to stage three. 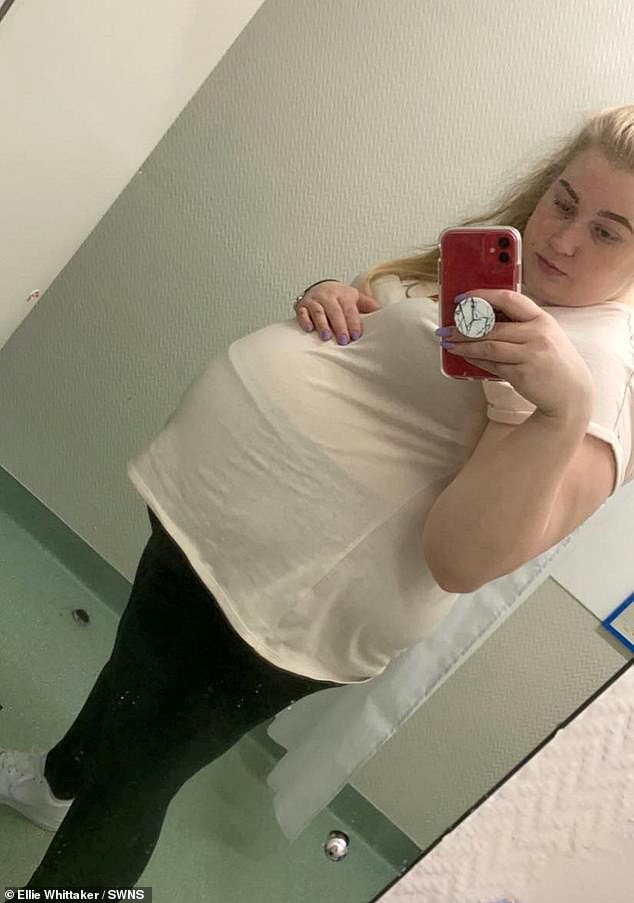 The mother-of-one, pictured during her pregnancy, eventually started chemo shortly after giving birth to Connie in March and has now been given the all clear 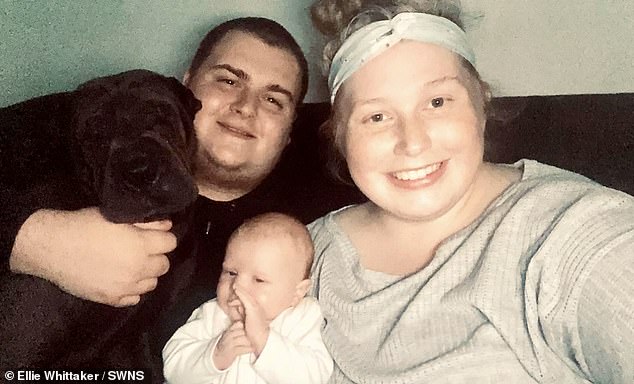 Ellie, pictured with her fiancé Kieran Marriott and their baby daughter Connie Marriott. Ellie said she did not regret her decision and would make the same one again if she was given the choice

WHAT IS HODGKIN’S LYMPHOMA?

Hodgkin’s lymphoma is a type of cancer that starts in the white blood cells.

It affects around 1,950 people each year in the UK.

A common early symptom is having a painless swelling in the armpits, neck and groin.

It has been linked to people with lowered immunity, a family history of the condition, smokers and those who are overweight.

Treatment may include chemotherapy, radiotherapy, steroids and stem cell or bone marrow transplants.

‘I lived with it for so long it’s weird that it’s finally gone – I can’t believe it. I don’t regret my decision and I’d make the same one again given the choice.’

After suffering a miscarriage in April 2019, Ellie started feeling really run down and developed a viral infection.

When a lump appeared in her neck, she went to the GP and underwent tests in July 2019.

It was around the same time that Ellie and her fiancé, Kieran Marriott, 22, a scaffolder, found out they were expecting another baby.

She said: ‘I didn’t know I was pregnant but losing the baby made us realise we were ready to start a family.

‘I was so exhausted and catching lots of chest infections – I thought it was down to stress and recently losing my granddad.

‘I was so sleepy I accidentally fell asleep in a meeting when I worked for the post office.

‘When the lump appeared the doctor thought it was tonsillitis but I knew it was something else.’

After going back and forth with the GP for the next month, Ellie was eventually referred to Chesterfield Royal Hospital, Derbyshire, in August 2019 for a scan and then a biopsy on the lump.

In October 2019, when Ellie was 16 weeks pregnant, she was diagnosed with Hodgkin’s Lymphoma by the Macmillan Cancer Unit.

An MRI confirmed it was stage two and Ellie was given the choice to delay her treatment or abort her unborn baby. 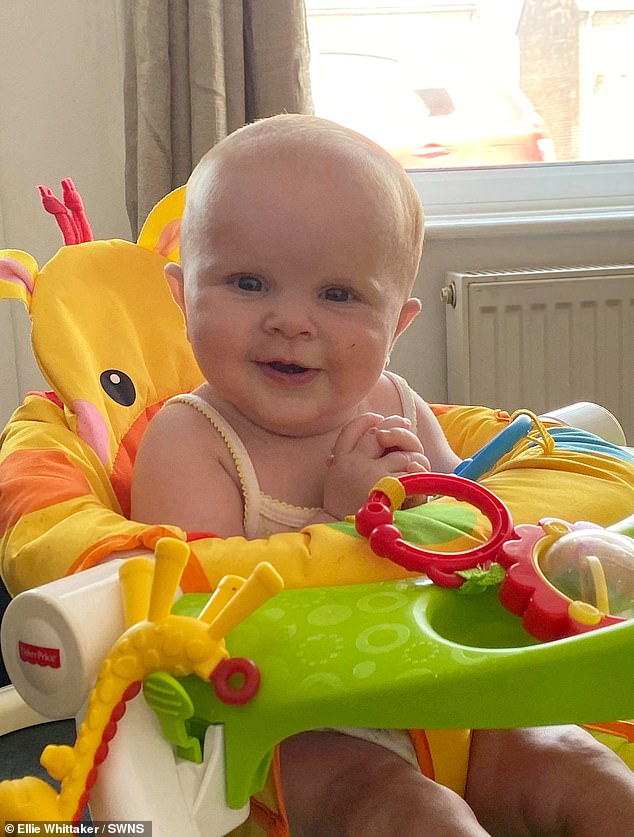 The doctor told Ellie cancer treatment could be detrimental to the fetus’s health, but Ellie did not want to abort (pictured: Connei Marriott now)

Ellie showing off her belly during the late stages of her pregnancy. She said she barely had any symptoms when she was diagnosed with cancer 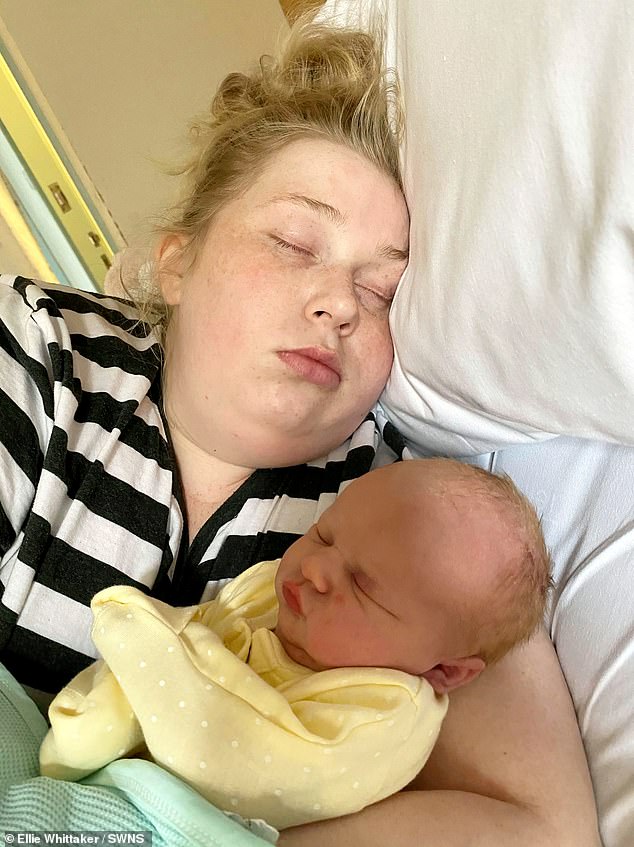 ‘I didn’t have any other symptoms apart from being tired – I couldn’t believe it,’ Ellie said.

‘The doctor advised I have an abortion because cancer treatment could cause problems for the baby. There was no way I was going to give her up so I chose to delay it.’

Ellie was referred to the Royal Hallamshire Hospital, Sheffield, where she was scanned every two weeks until she underwent a planned c-section at 37 weeks.

Doctors planned to start Ellie’s treatment at 27 weeks but decided she was doing well enough to wait until after the birth.

‘They had only ever looked after one pregnant lady with Hodgkin’s Lymphoma,’ she said. 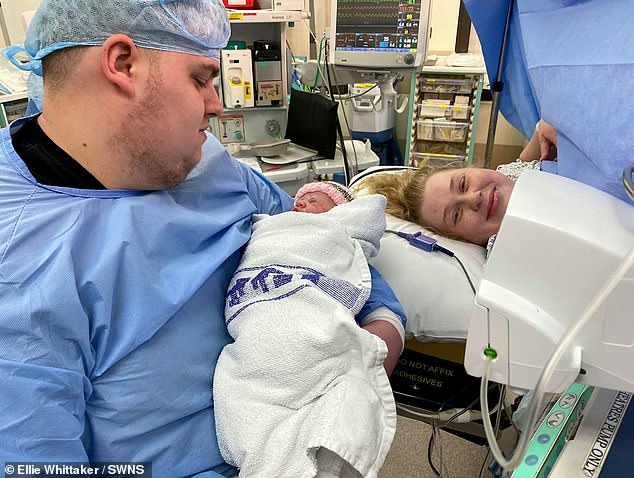 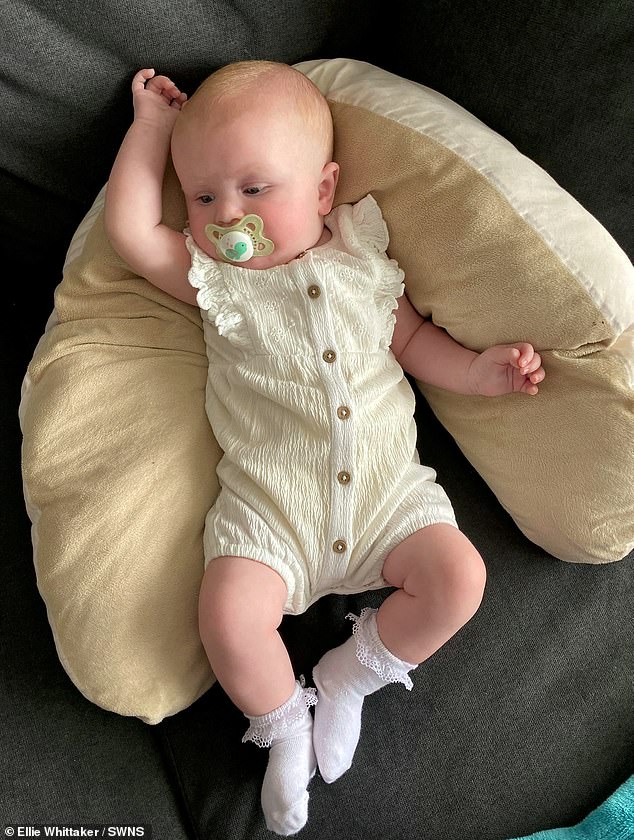 Following her pregnancy and after starting chemotherapy seven months later than she could have, Ellie was scared she would not be there to watch her daughter grow up

‘But I tried not to think about it – I wanted my pregnancy to be as normal as possible.’

She said: ‘I tried to spend as much time with Connie as I could before I started. I remember crying and thinking I wouldn’t be able to be there for her.

‘I knew the chemotherapy would take its toll.

‘But when they scanned me the cancer had progressed to stage three – it had spread to my stomach and spleen.’

During her fourth round of chemotherapy, Ellie underwent a scan and discovered she was responding well to treatment and could drop one of the drugs she was taking. 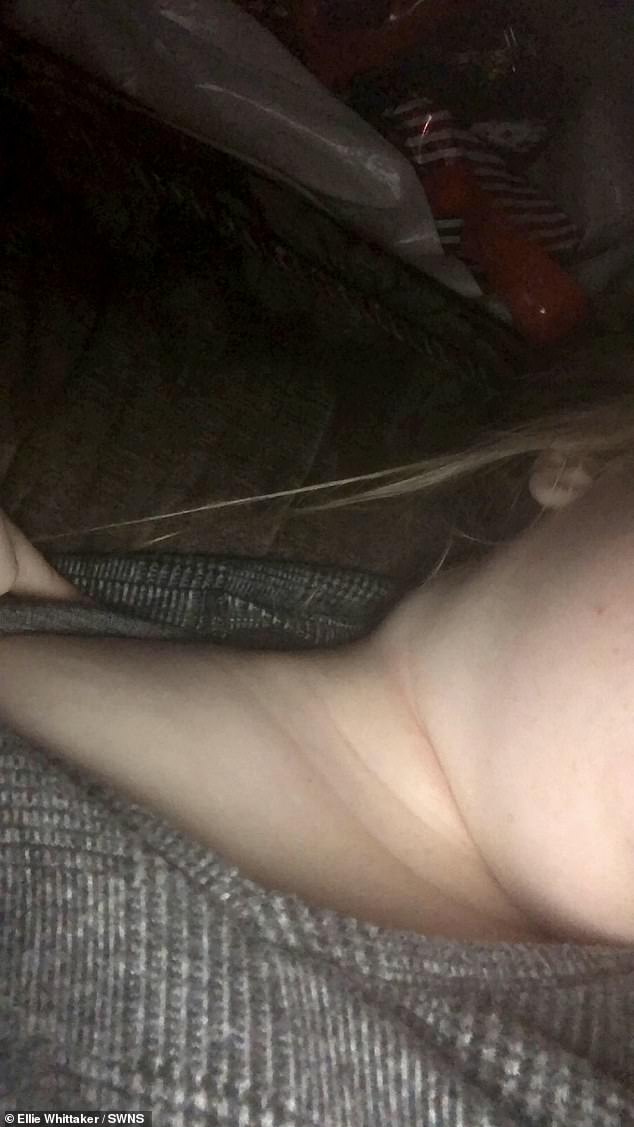 Ellie showing the lump in her neck, one of the symptoms of her cancer, which left her felling exhausted 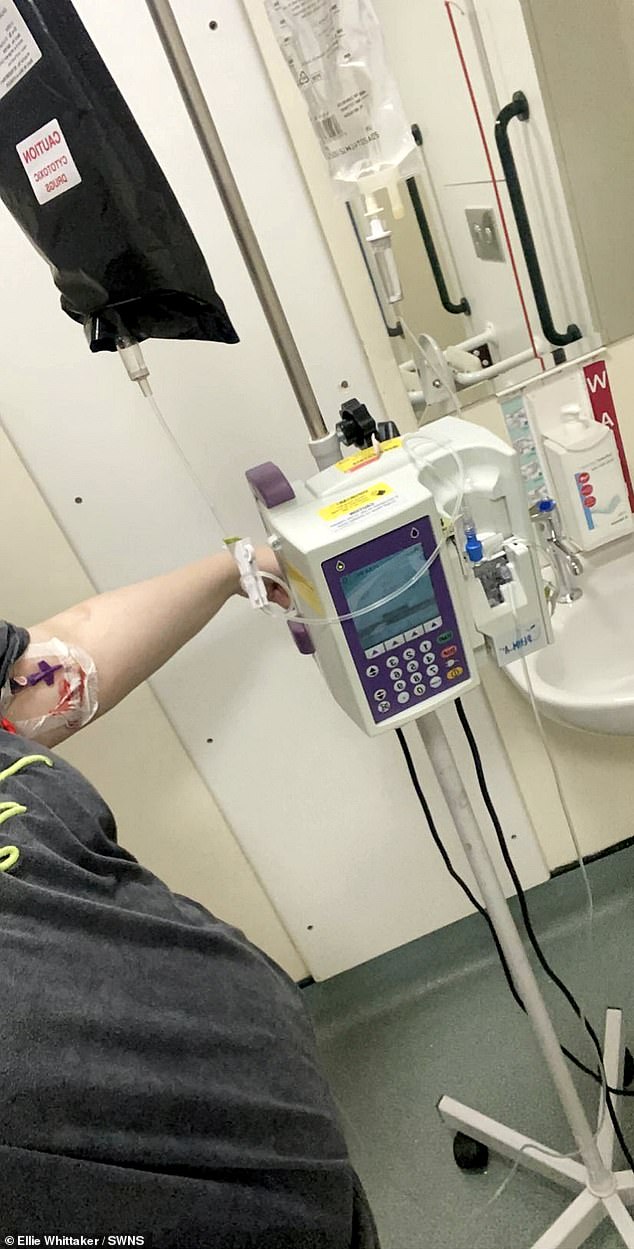 The mother-of-one showing her IV during her chemotherapy after giving birth. Now that her cancer is gone, she said she could finally focus on being a mum 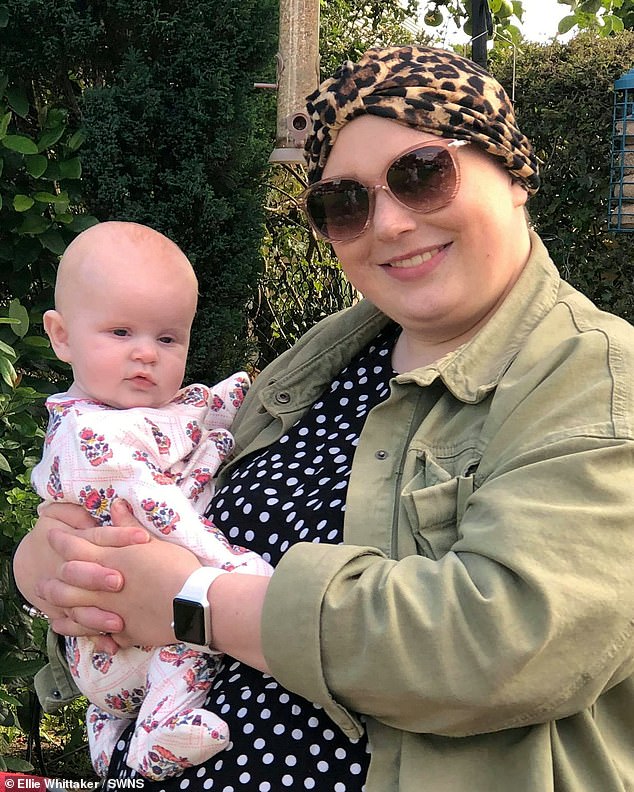 A beaming Ellie holding Connie during some outdoor playtime. She is now cancer free after 12 grueling rounds of chemo

Ellie underwent a final PET scan in October 2020 and doctors broke the exciting news that there were no signs of cancer and it was unlikely to return.

Ellie’s grateful for the support she’s had from Connie’s dad, Kieran, and her parents, Debbie and John.

She said: ‘Everyone’s supported me in many ways.

‘I had to wait two weeks for the results from my final scan which was agony.

‘I’m so pleased it’s gone and I can focus on being a mum.

‘Kieran’s been incredible and cares for Connie whenever I’ve got hospital appointments.

‘Connie’s an amazing baby – she started teething and trying to sit-up. She’s the quietest baby and sleeps through the night. I wouldn’t change her for the world.’