If you haven’t been on a coaster this summer, was it really summer at all?

In celebration of National Roller Coaster Day, Aug. 16, FOX News wants to take you on a ride. Universal Orlando’s Jurassic World VelociCoaster, was named the “most anticipated” coaster of 2021 by Coaster 101, beating out scream-inducing thrill rides all over the U.S. According to Universal Orlando, Jurrasic World VelociCoaster is now the fastest and tallest launch coaster in Florida.

Located at Universal’s Islands of Adventure, the VelociCoaster is the latest addition to Jurassic Park where visitors come face-to-face with life-sized dinosaurs. The attraction is set in a dinosaur habitat and was conceived of by the Universal Creative team in conjunction with the makers of the Jurassic World films, including Steven Spielberg, Colin Trevorrow and Frank Marshall. 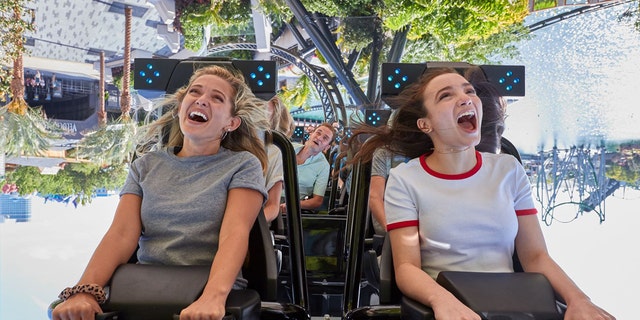 Located at Universal’s Islands of Adventure, the VelociCoaster is the latest addition to Jurassic Park where visitors come face-to-face with life-sized dinosaurs
(Universal Orlando Resort)

True to their film characters, Claire and Dr. Wu are enthusiastic in bringing guests in close proximity of Velociraptors as part of the coaster, while Owen believes otherwise. Riders are immersed in a story starring the Velociraptor pack – Blue, Charlie, Delta and Echo and the attraction’s timeline is set shortly before the events of the first Jurassic World film.

Claire has already green-lit development for the Indominus Rex, but it seems there’s been a delay. With the Velociraptors showing signs of intelligence and responding to Owen Grady’s command, Claire has designed a new ride – a roller coaster right in the middle of a Raptor paddock.

Surrounded by 6,000 square feet of rockwork, a giant waterfall and lush jungle vegetation, Jurassic World VelociCoaster catapults guests along 4,700 feet of pulse-pounding track, 155 feet in the air at 70 mph. The highlight is a spiraling 360-degree inversion, inches above the lagoon. The attraction has four inversions with only a lap bar restraint.

1. At the very start of the ride, you’ll launch 70mph in just 2.4 seconds through the Raptor paddock

2. VelociCoaster has no brakes until it’s over.

3. It’s the fastest roller coaster at any Universal park

4. VelociCoaster does not slow down – it actually speeds up, the second half of the ride is faster than the first, and it maintains some of its fastest speeds all the way to the final brakes.