The Nationals leadership has condemned outspoken backbencher George Christensen for his appearance on the show of a US conspiracy theorist in the “dark corners of the internet” who has falsely claimed mass shootings were staged and spread misinformation about coronavirus vaccines.

Deputy Prime Minister Barnaby Joyce and Agriculture Minister David Littleproud both spoke to Mr Christensen on Tuesday after his appearance on Alex Jones’ show was publicised and distanced themselves from his views but declared they supported his right to free speech. 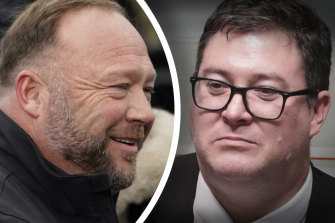 Alex Jones was booted off social media channels – Facebook, Twitter and YouTube – in 2018, with his content also removed by Spotify and Apple from their respective podcast and app services, for breaching policies on promotion of hate and harassment.

A spokesman for Mr Joyce, who is travelling in the United Kingdom, said the Deputy Prime Minister did not agree with Mr Christensen’s comments and had spoken to him, but did not disclose the details of the conversation.

“Mr Christensen has the right to say what he believes,” the spokesman said.

The acting Nationals leader, Mr Littleproud, said he respected Mr Christensen’s freedom of speech but urged him to reflect on his responsibilities as a member of Parliament and judgment in speaking with Jones, who he said had a chequered past.

“It’s not appropriate. I condemn his comments and I think it was an error of judgment for him to go on that program,” Mr Littleproud said. “Obviously, we want to work constructively with George but know that there are limits and there are boundaries that we, as federal politicians, have to adhere to.”

He said those limits applied to the “dark corners of the internet” just as much as in Parliament.

Employment Minister Stuart Robert took particular aim at the Auschwitz comments that Mr Christensen did not contest. “I haven’t heard the comments, but on face value… it’s completely and utterly inappropriate for anyone to make light of the Holocaust and the devastation that occurred,” Mr Robert said. “It is flat out vile.”

Mr Christensen has announced he will leave Parliament at the next election and controls a useful vote for the government in the finely balanced House of Representatives. 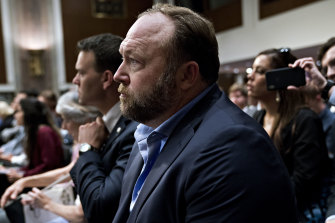 Rather than promoting the Liberal National Party, of which he is a member, his social media accounts are primarily devoted to promoting his own brand, Nation First.

Mr Christensen has been repeatedly criticised by his colleagues for airing unpopular views during the pandemic, such as calling for police officers to be arrested after protests in Melbourne.

Former Nationals leader Michael McCormack was the first of his colleagues to speak publicly about Mr Christensen’s appearance in Jones’ show, saying on Monday that the Queensland MP should be spending time in his electorate, helping community groups and encouraging vaccinations.

“He’d be far better off talking to people such as that than sit up late at night and talk to an American TV host about how dreadful his own country is, in his view,” Mr McCormack told The Sydney Morning Herald and The Age.

Around the time of Jones’ show, Mr Christensen, whose office have not responded to requests for comment, suggested it was calculated to cause outrage.

“Watch lefty and MSM [mainstream media] heads explode when they hear Alex Jones of Infowars is backing my speeches,” he posted on the messaging app Telegram.