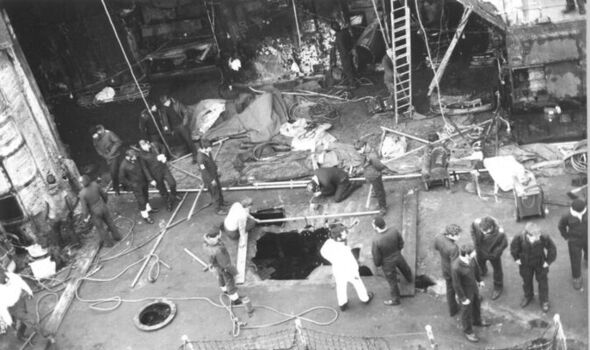 Almost a quarter (24 percent) boldly claim not to be interested – while a fifth admit they turned a blind eye to anything which was too distressing.

But 18 percent blamed the lack of reporting and absence of social media in the 1980s for their lack of recollection or education.

The study, by the Armed Forces charity, SSAFA, also found one in ten remember their families protecting them from the upset at the time.

Falklands veteran and SSAFA volunteer, Mark Trainor, who works with the charity to raise awareness of modern conflicts and, in particular, the 40th anniversary of the Falklands War, said: “In 1980, I joined HMS GLAMORGAN where I spent the next five years.

“The ship was going 24/7 and it was pretty scary, to be honest, when you heard the aircraft, because then you wondered, “is it a friend or foe?”

“When our ship got hit, it was just a thud, that’s all we heard. And then we started hearing we’d been hit.

“When we went round to the port side, there was a big hole on the deck in front of the hangar.

“The hangar got taken out – but there was no panic, you’ve got to deal with the situation.

“Though nothing prepared me for burying people at sea, and I’m very clear with this because it’s still there – this wasn’t like putting somebody in a coffin.

“The medics tried to match up parts of the body as best they could, and they were in bin bags with sinkers on.

“People need to be aware and remember the brutality and horror of this conflict.

“As a Falklands veteran, I think it is incredibly important for the public to ensure that the Falklands Conflict is never forgotten.

“It’s very hard to believe it has been 40 years since the war, but it changed me, and it changed the person I am today. We must never forget.”

Unfortunately, two-thirds currently have little or no awareness of how much help is available for serving military personnel and their loved ones.

A second study of 2,000 adults was also commissioned by SSAFA, to find out how much Brits know about the Falklands War.

It revealed that over a third (35 percent) could not name the year it took place, and a fifth had no idea which countries fought at the time.

Six in ten adults could not identify how long the conflict went on for, while 92 percent had no idea five ships were sunk, and three-quarters (74 percent) were unaware that 907 lives were lost in total.

More than a quarter of adults didn’t know Margaret Thatcher was the British Prime Minister when the war took place – with one in ten thinking it was Winston Churchill, and six percent naming Boris Johnson.

The official commemoration of the Falklands takes place on 9th June – but 56 percent of those polled, via OnePoll, were seemingly unaware.

Sir Andrew Gregory, CEO at SSAFA, said: “Protecting its peoples from aggression is one of the prime responsibilities of any Nation.

“The United Kingdom was required to fulfil that obligation when forced to liberate the Falkland Islands in 1982.

“Having ensured the population could continue to live in freedom, we remember the 255 British military personnel who made the ultimate sacrifice, and the many others who were wounded 40 years ago.

“It is important that this country understands the critical role of members of our Armed Forces in sustaining the democratic rule of law in this part of the South Atlantic, and wherever else they are threatened.

“SSAFA supported serving personnel and their families before, during, and after the Falklands Conflict, just as we have done for every campaign over the last 137 years.

“And we continue to support those veterans and their families still living with the lasting effects of their time fighting for the freedom of the Falkland Islands.”

The Falklands Conflict between Argentina and Britain over the sovereignty of the Falkland Islands (known as Islas Malvinas in Argentina), South Georgia, and the South Sandwich Islands, lasted 74 days, between 2 April – 14 June 1982.