Spanish cinema has a particular knack for the adult domestic comedy, the kind that takes the strains of family life seriously but serves them up with lashings of pep and colour. Of course, Pedro Almodovar is the forever maestro of the genre, his Women on the Verge of a Nervous Breakdown setting a gold standard for his own and other films about las senoras fuertes, who take no mierda from anyone, especially los hombres. He doesn’t have the kitchen to himself, however; Rosa’s Wedding, which opens this year’s Spanish Film Festival, is proof of that.

The moment we see Rosa – warm and feisty Candela Pena with her beautifully lived-in face, vivid in her hot pink cardigan – we recognise the territory. Rosa works for a costume supplier, hemming and putting in zips as fast as her hands will move as extras surge around her, looking for their assigned outfits; her suave boss depends on her, but so does her agitated brother Armando, who needs her to give his children dinner and baths while he works late; so does her alcoholic sister Violeta; so does her widowed father Antonio, who arrives one night for dinner and announces he is moving in; so does the man in her life, who has the builders in but no time to oversee them. Could she pop by the flat on her way to her brother’s and see if they’ve finished the bathroom tiling?

Of course, she manages it all – if you want something done, as the saying goes, ask a busy woman – but she doesn’t want to do it any more. She wants to be good to herself, to offer herself the succour and support couples promise to give each other when they get married. So she decides to have a wedding, where she will promise herself future happiness. The people she loves will be there. It will be fun, but will put them on notice that Rosa is no longer available.

The one-person marriage is a real phenomenon, says director Iciar Bollain. Several years ago she read an article about it in The Guardian, illustrated with pictures of women posing alone in splendid white dresses – they might not have a husband, but they still get the pictures of themselves in their prime – and thought it would make a great starting point for a film.

“I found it hilarious. But then I thought OK, are there other reasons to do this? Who marries themselves?” The character of Rosa began to form at that point. “I thought it would be a woman, because we tend to leave ourselves till last. It is a cultural thing. We are expected to be the carers, we are expected to be the ones who are there all the time for others. So the idea was to talk about this big existential idea of self-love, but in a light way.” 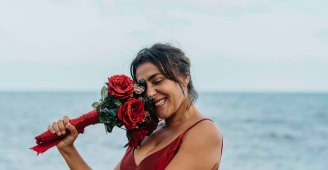 Candela Pena plays a woman fed up with running after others in Rosa’s Wedding.

Some of that light is literal: the film is set in sunny Valencia and the Mediterranean resort of Benacassim, where Rosa first learned to sew at her mother’s knee. “I thought the Mediterranean was a very good environment for the story. This kind of bubbling, noisy family, that is very Mediterranean. It’s like the Italians, they talk on top of each other.”

All the actors apart from Candela Pena were told to talk constantly over the top of one another, no matter what problems it caused in editing.

They loved it, of course; the brilliant Sergi Lopez as Armando becomes such a fountain of verbal sludge that Rosa never has a chance to say no to anything, let alone explain that this really isn’t going to be a normal wedding and the town brass band really shouldn’t be invited. Spanish people talk more openly than Anglo-Saxons, agrees Bollain. “But that doesn’t mean we say a lot – and it doesn’t mean we listen! We are just more dramatic about it.” 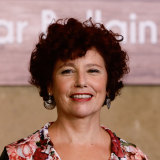 Director Iciar Bollain: “We tend to leave ourselves till last.″⁣Credit:Getty Images

Iciar Bollain is not a name known (or even readily pronounced) in English-speaking markets, but she has been nominated for several Goyas – the Spanish version of the Academy Awards – as actress, writer and director, winning the top award for best film for Take My Eyes in 2003. She is 53; her partner is Paul Laverty, regular scriptwriter and collaborator with veteran British director Ken Loach; they have two children and juggle their commitments so they aren’t travelling at the same time. “We carry on fine, which is a very good thing. He was very clear I was going to have a career as much as him and then we wanted kids.”

So she isn’t Rosa. “But I do recognise many things in Rosa. I have a mother who is exactly like Rosa and I know a million Rosas.” The parent who simply moves in is drawn directly from life; her writing partner Alicia Luna’s mother did the same thing and stayed for five years. “Her mother sat down and she just didn’t have the heart to say no! I mean, it’s very hard.”

We meet at the film festival in San Sebastian, where Bollain has just come from a Q&A with a local audience. “There was a great question. What would happen if the Rosas of the world stopped? And I said ‘well, everything would stop!‘” You can certainly read the film politically, she agrees. “It’s very cheap for the state to have Rosas, because they take care of the elderly, they take care of the young, it’s saving tons of money! How great the Rosas are for a state that doesn’t provide things that should be provided!”

So, with so much hanging on the subject, why did she choose to make a comedy? “In a drama I’m not sure you would have got along with Rosa, because she would become something like a victim, a complainer,” says Bollain. “But if you change it up and say ‘let’s laugh at this’, then I think you get further with it. I was very clear about that from the beginning. Plus the idea of marrying yourself has a mad side. It’s ridiculous, so you can’t go there being that serious.

“And it’s funny because being more of a comedy, you think it will be taken more lightly – but the truth is that it hasn’t. There are many people who have said to me ‘oh, it’s made me think’. Well, you always hope your film will make an impact on people and leave them with something.”

The one benefit of the pandemic, she adds, is that it has created a space in life for many more of us to do the same thing. “Suddenly you have another sense of time, another sense of family. I have been at home more, because usually I am travelling a lot. And you start saying ‘how many people do I see that I don’t want to see? Or how many things did I stop doing that I love to do, because I don’t have time?’

“I think what Rosa does is something the pandemic has obliged us all to do. Because you don’t need to be a woman to think these things. Just the fact of stopping a second and thinking ‘OK, what am I doing?’ Am I happy with what I’m doing? Am I listening to myself? And the answers to these questions are dangerous, because if the answers are ‘no’, then you are in the shit! And you have to do something about it! So, of course, it can make you think. I hope so.”

The Spanish Film Festival is in Melbourne, Apr 22-May 9 and Sydney, Apr 20-May 9. spanishfilmfestival.com