Ultimate bear hug! NHS paramedic, 38, dresses up to surprise her twin daughters, nine, after she isolated from them for three months because of their life-long heart condition

Daughters Daisy and Ruby, nine, were diagnosed with DiGeorge syndrome as children – a condition that can cause lifelong problems, including heart defects and learning difficulties.

And to make sure her girls were not at risk, Sally made the decision to leave them in isolation with her sisters Claire and Emma. 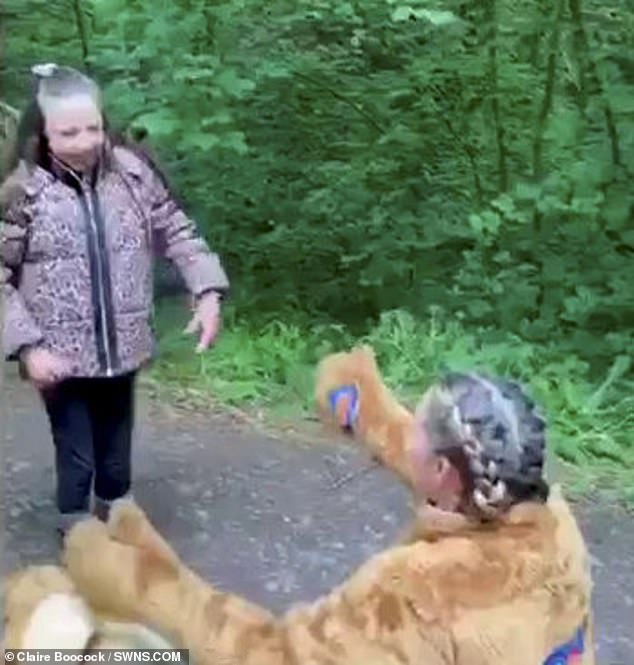 Single-mother Sally Boocock, 38, from Skipton, North Yorkshire, reveals herself and holds out her arms to Ruby

But after three months of working around-the-clock, Sally was able to finally give her daughters Daisy and Ruby a hug in a heartwarming reunion yesterday.

Sally’s sister Claire, who has been looking after the nine-year-old girls for the past six weeks, told Daisy and Ruby they were going on a ‘bear hunt’ in the woods along with their grandmother Julie Boocock.

Claire set up the reunion with Sally dressed as the mascot for Leeds Children’s Heart Unit – where Ruby has been treated for her condition. 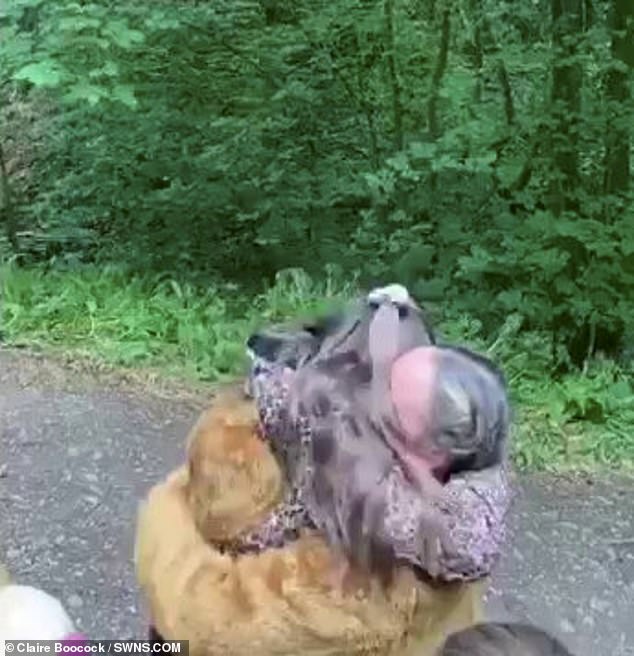 After spending three months apart, Sally holds Ruby close to her after surprising them on a walk 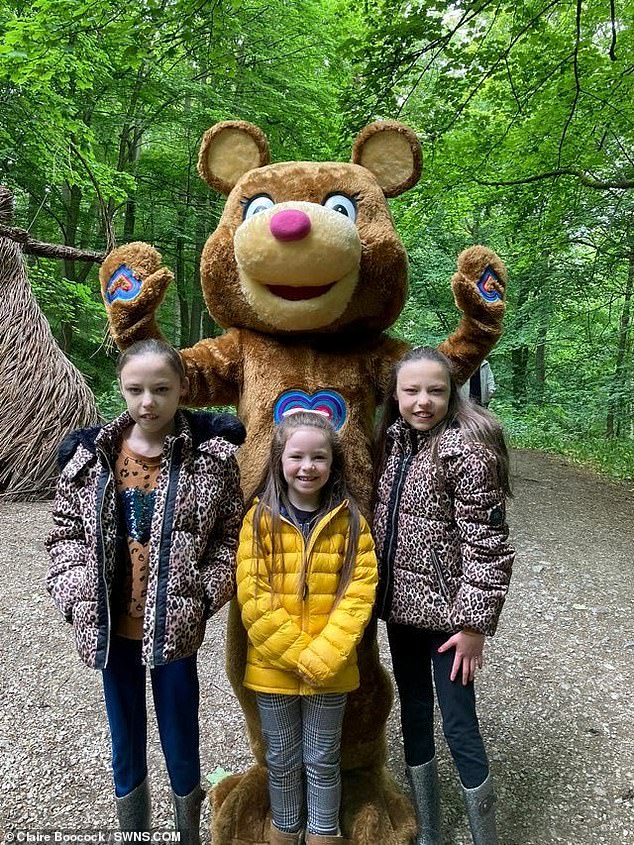 Sally poses in the costume with Daisy, Lily, and Ruby.  Sally has paid tribute to the public for their ‘sacrifices’ throughout the crisis and thanked her sisters for taking care of Ruby and Daisy 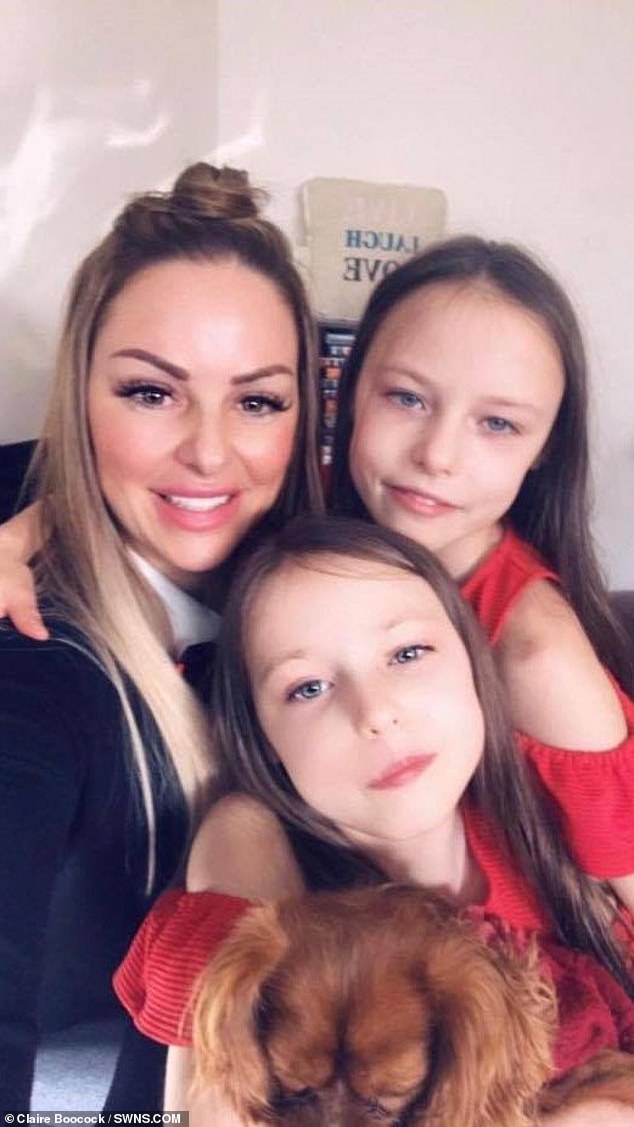 Sally with her daughters Ruby and Daisy. Sally added: ‘Being away from the girls for the last three months was definitely one of the hardest things I ever done’

During the walk, footage shows the girls stop in their tracks as the brown bear walks towards them with one exclaiming: ‘It’s Katie bear.’

Daisy, Ruby, and their cousin Lily appear startled by the surprise as Sally says: ‘Go and say hello girls.’

Lily, wearing a yellow coat, rushes over to the mascot and wraps her arms around the cuddly bear.

Ruby follows in her cousin’s footsteps and shares a loving embrace with the bear, yet her sister Daisy appears nervous and stays at the end of the path.

‘Daisy? Come on, I will come with you’, Sally says, as the other two girls nestle into the arms of the brown bear.

But just seconds after Lily and Ruby pose for a picture with the bear, Sally takes off the head part of the costume and exclaims ‘boo’ – revealing herself to the little ones.

In a heartwarming moment, Lily and Ruby pile onto Sally who appears overjoyed to be with her children again.

WHAT IS DIGEORGE SYNDROME?

DiGeorge syndrome is present from birth and is caused by a problem with the sufferer’s genes, called 22q11 deletion.

It may cause several lifelong problems in the sufferer.

This can include heart defects, learning disabilities, and hormone, speech, hearing and feeding problems.

The severity of the condition differs by person: while some people may die from it, others grow up without realising they have it at all.

However, Daisy, who appears to be still apprehensive, says: ‘You scared the life out of me!’

Speaking about the reunion, Sally said: ‘Yesterday was just amazing, I wanted to make the reunion special and surprise them best I could.

Sally added: ‘Being away from the girls for the last three months was definitely one of the hardest things I ever done.

‘Not doing the usual mum things like bedtime, cuddles and just the general day to day things has been so difficult.’

Sally has continued to work as an EMT at Bradford Ambulance Station – spending six nights a week saving lives, while protecting her daughters by isolating from them.

The family have only been able to communicate via FaceTime or when Sally drives past to blow kisses through her car window on the way to work.

Claire described her sister as an ‘absolute hero’, and said: ‘It [the reunion] was just so emotional and heartwarming. Sally has spent 13 to 15 hours a night at work with the ambulance team saving lives.

‘She hasn’t been able to give her girls a hug since March 9.’

Sally has paid tribute to the public for their ‘sacrifices’ throughout the crisis and thanked her sisters for taking care of Ruby and Daisy.

She said : ‘We are all heroes in our own right, we have all stood together and done our bit.’