I am the perfect age to not know the music of One Direction. From 2011 to 2015, when they were the biggest band in the world, I had a playlist that featured Laid by James, Cannonball by the Breeders, and Paper Planes by M.I.A, and Africa by Toto. Why would a person in possession of such a playlist need to hear new music?

I knew about One Direction, of course. I knew they were the boy band du jour, manufactured by the most revolting man alive, Simon Cowell, to be sold to the least discerning demographic, teenage girls. 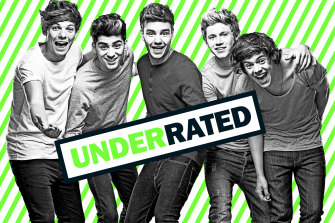 In other words, I already knew they were bad. I did not need to listen to them.

I knew One Direction were bad just like NME knew they were bad. So bad that the Brit rock bible crowned Harry Styles, the band’s pathologically innocuous heart-throb “Villain of the Year” for two years running. War criminal Vladimir Putin was among the other nominees, but no actual crime could compare with that of being in One Direction.

GQ knew they were bad, too. That magazine sent a writer, a self-described “34-year-old man in a Burberry biker jacket”, to a 1D concert to report on what it was like among the “rabid knicker-wetting banshees”, whom he likens to a howling, moaning “dark-pink oil slick”. Unable to bear this “hormone bomb”, the writer proudly reports abandoning the crowd after only 40 minutes.

One Direction were booed at the MTV VMAs. They were booed at the French NRJ Awards. Harry Styles was booed by Elton John fans when Elton announced the star’s presence in the audience at one of his London shows. “I love One Direction, f— off,” countered Elton, the only person, it seemed, who dared to say so.

Fast-forward to 2022. One Direction have been on an 18-month hiatus for the past six years. The Directioners have finished school and some have even graduated from university. We have endured several centuries of global events in the space of three years. And everyone loves Harry Styles now.

An adult (!) male (!!) music journalist writing for The Guardian can be found gushing over the former Villain of the Year’s “sheer, objective gorgeousness” and “his very loveliness” in a five-star review. NME (!!!) is delirious in its coverage of his Wembley show, which it also gives five stars. “It is only when you witness this much-uncomplicated glee that you realise how rarely you see it,” it writes of the crowd, which it does not call an oil slick.

At Wembley, with NME right there, Styles performed One Direction’s first single, What Makes You Beautiful, as he does at all his shows and will do, I’m sure, in Australia next year. “The way that you flip your hair gets me overwhelmed,” he sings, without a hint of a cringe for either his heritage or for being overwhelmed by hair. The crowd goes wild.

You know it’s not the same as it was, with “was” being from 2011 to 2015. Now we let rock stars be who they are because they were in a boy band, not despite it. Sometimes we let girls enjoy things without heaping shit on them. We seem to have realised that a lot of our previously held opinions about culture made by and for girls and women were extremely screwy.

Reader, I listened to them. 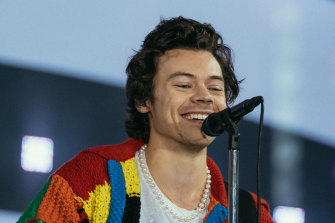 One Direction released five albums in five years. That’s a lot of songs, and I’m not going to pretend they’re all good. Some are even objectively bad, like that one that begins “You’re so pretty when you cry” and I don’t know what comes next because I always leap across the room to skip it.

But by their last couple of albums, Four and Made in the A.M., when the band had more of a say in the songwriting, there are many, many more winners than not. One Direction’s music, it turns out, is actually, amazingly, great.

There are songs that sound a lot like Fleetwood Mac and songs that kind of remind you of Bruce Springsteen. You can hear influences from the Rolling Stones, the Police, the Who, Paul Simon, the Verve, the Eagles, Def Leppard, the Strokes, the Beatles, even Haim. These are artists whose fans have always included men, which means it’s socially acceptable to like them. One Direction made the same kind of music; the only difference was their fan base.

“We’re so past that dumb outdated narrative of ‘Oh, these people are girls, so they don’t know what they’re talking about’,” Harry Styles told Rolling Stone a few years ago (now that he was being taken seriously enough to appear on the cover of Rolling Stone). I’d like to think we are. Past it, I mean. Or at least I’d like to think I am.

As It Was is on its way to being one of the most-streamed songs in history, as it should. It’s such a good song! And yet, Stockholm Syndrome, which Styles co-wrote for One Direction, has been right there in front of us since 2014. It’s also such a good song, guys!

There are so many good things right in front us. We just have to listen.

Tabitha Carvan is the author of This Is Not a Book About Benedict Cumberbatch: On Finding Your Thing and Loving it Like Your Life Depends on It (Fourth Estate).

To read more from Spectrum, visit our page here.