When you’ve done the golden-gong double of a best actress Oscar and a lead actress Emmy you’ve earned the right to pick your roles. But after prize-winning turns as Queen Anne in Yorgos Lanthimos’s The Favourite, and then as Queen Elizabeth II herself over two seasons of Netflix’s The Crown, there was one part that Olivia Colman was determined to play: an unassuming housewife almost nobody’s heard of. Why?

Ed is Ed Sinclair, aka Colman’s husband. “It” is Landscapers, a three-part drama that tells the true story of Susan and Christopher Edwards, also known as the Mansfield Murderers, who in 2014 were sentenced to 25 years in a British prison for killing Susan’s elderly parents and burying them in their back garden. 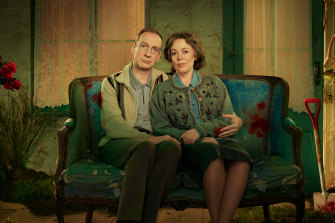 Colman knows how this looks: she’s doing her husband, for whom this is his first screenplay, a favour, right? But when Landscapers first began she was at a very different place in her career.

“This was started years ago,” Colman says, “when Ed was looking for something to write for me.” At that time, Colman was best known as a comedy actor, appearing alongside her old university friends David Mitchell and Robert Webb in a series of British sketch shows as well as the classic sitcom Peep Show. It was the actor/director Paddy Considine (House of the Dragon) who thought that she had more to offer than just a wide smile, and cast Colman in his brutal 2011 study of domestic violence, Tyrannosaur. Colman was superb – yet her husband felt not enough notice was taken of her talents in a straight role.

“I am of course Colly’s [Colman’s nickname] biggest fan,” Sinclair says. “I’ve watched her every single moment of her career, and I’m very aware of what she can do. The reason I was looking for ‘Olivia Colman projects’ – this was about five or six years ago – was the sense of burning injustice that more people hadn’t seen her in Tyrannosaur. Of course a lot has changed since then, but I wanted more people to see Colly doing more of what she can do.”

The role Sinclair found and wrote for his wife back then looks like it could have been made for the Olivia Colman we know now – the one who can channel roiling emotion beneath a stiff upper lip and a forced smile better than anyone. 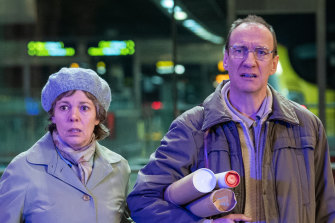 “I love playing that person who’s timid and shy and sweet but has something hidden and dark behind them,” says Colman of her role in Landcapers.Credit:Sky/Stan

“I love playing that person who’s timid and shy and sweet but has something hidden and dark behind them,” says Colman. And Susan Edwards has a lot to hide. The story that emerged in 2014 was that Edwards and her bookkeeper husband Christopher, played here by David Thewlis (Harry Potter), had killed Susan’s parents, kept it a secret for 15 years and in that time spent more than A$370,000 of the parents’ money on Hollywood memorabilia. They could not have been – or appeared to be – a more bizarre or a more unlikely pair of criminals. At the time the press presented it as a sick charade, but Landscapers takes a different perspective.

“She’s a perfectly straightforward, normal, shy, quiet, you-probably-wouldn’t-notice-her-walking-past-her, introverted, devoted wife,” says Colman. “Yes, they did murder people, and they did get away with it for 15 years. So, you automatically go, ‘Bad! Oh, awful people!’ But then you look in to it more and you see that they are two gentle people who are very devoted to each other, and in love – and you don’t know what happened that night [when Susan Edwards’ parents were murdered].”

Sinclair’s script looks at Susan’s early life and offers up some mitigating circumstances. 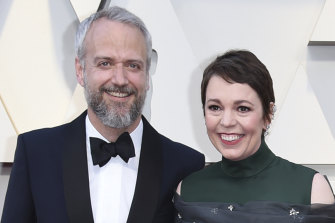 Olivia Colman and her husband Ed Sinclair arrive at the Oscars in February 2019. Credit:AP

“The fact that there’s historical abuse, that she was abused by her father: that does something to a person,” says Colman. “We know now that if this happens to you as a child it might not come out until you’re an adult. But for some reason in Susan’s case that was thrown out of court as impermissible evidence, as historical abuse or something. I think Ed [Sinclair], as an empathetic person, thought, ‘they can’t just be baddies,’ and wanted to tell a story. I don’t know what any of us would do in those situations.”

Even so, what Colman has described so far is still basically another “true crime” piece – the genre that, emboldened by a series of podcasts-turned-exhaustively-detailed Netflix series now has an established grammar all its own. Landscapers, Colman is keen to point out, is not one of those series.

“There’s intrigue, there’s crime – but then it goes quite fantastical – they all become cowboys, for example [in homage to the Edwards’ fascination with Gary Cooper]. It’s sumptuous; there’s so much in it, so much imaginative stuff at play. It’s not your average true crime drama. As you can tell, I don’t really know how to describe it because I haven’t seen anything like it before. I’m so excited.”

It’s indisputable that by now, six years after Sinclair first heard the Edwards’s story and decided to dig a little deeper, it’s his wife who has the industry clout. She admits that, as with any couple, going into business with your partner can be tough.

“It’s a learning curve but we sort of left each other alone – he has his job and I have my job. So for example he’s seen all of it, but he’s never told me what he thinks of my performance. We’re very honest about how this wouldn’t happen in a normal writer/actor relationship, so I don’t want to change that. I like our roles being separate. I think we both admire what the other one does – I love Ed’s writing, but I wouldn’t dare to get into his writing process. And God help him if he tried to tell me how to do what I do…”

But she admits that the partnership between an Oscar-winning actress and a first-time writer might raise some eyebrows. As with her character in The Favourite, who would want to be the one to tell screen queen Olivia that her beloved husband’s work wasn’t up to snuff? In that sense, she says, Landscapers has brought her some vindication.

“I’ve watched Ed work away at this for years,” she says. “And absolutely, if he wrote me anything, I would do it again because I love his writing. I’ve always been his biggest fan. What’s lovely is that the first time he showed people the script for Landscapers they went, ‘Oh… Oh! Bloody hell, it’s amazing!’ ‘I knew it!’ I said to them – ’You see? I told you so!”

And these days, when Olivia Colman tells you so, it’s best to listen.

Landscapers is on Stan from Wednesday, December 8.