The Little Black Dress or LBD has been cancelled at the Oscars.

Orange Is The New Black’s Laverne Cox, in a fitted strapless August Getty black dress, wore a cape that looked ready to fly her as far as the Hollywood Hills. 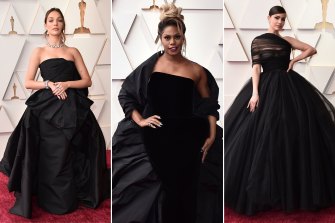 The red carpet warms up

Sure, the awards are important but the first power play of the Oscars happens on the red carpet. The later you arrive, the more powerful you are. So let’s go straight to the bottom of the ladder with Hollywood-adjacent celebrities, socialites and television talent that you will have to search IMDb to recognise.

Internet personality Rickey Thompson in a GCDS black cape and sheer bodice, heiress Nicky Hilton in Jenny Packham and King Richard’s Saniyya Sidney in Armani couture are giving the photographers a chance to test the lighting. 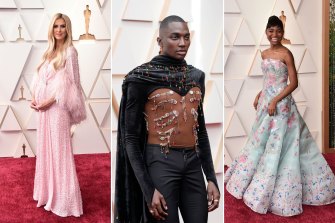 Welcome to the Oscars

Good morning and welcome to our live coverage of the 94th Academy Awards.

Will it be The Power of the Dog or CODA for best picture, or can the acclaimed three-hour Japanese masterpiece Drive My Car pull off a surprise victory?

Bringing you the action from the red carpet is fashion editor Damien Woolnough. Entertainment expert Karl Quinn will join our blog when the ceremony begins. Michael Idato is at the Dolby Theatre in Hollywood, while Garry Maddox will also share his insights as the ceremony rolls on.

We’ll bring you every frock, twist and turn over the next few hours. So sit back and join in the fun.