And it’s that image she’s definitely putting to the test in the new thriller, “Welcome to The Blumhouse: Black Box,” one of the four freaky films hitting Amazon Prime this October.

“I think casting Phylicia was a stroke of genius on the part of our filmmaker because she is so adored and came into all of our lives as America’s mother,” Blumhouse Television Co-President Jeremy Gold said of her involvement in the film. “And to see her in this role where her intentions are perhaps not exactly morally correct is really fascinating because when we see her we immediately imbue her with all this love and then she slightly turns that on us.”

We won’t spoil anything here, but there’s definitely something sinister going on in the movie — which finds photographer Nolan Wright (Athie) struggling to regain his memories after a car accident. He takes up a neuropsychiatrist’s (Rashad) offer for an experimental treatment and, well, things start getting weird. 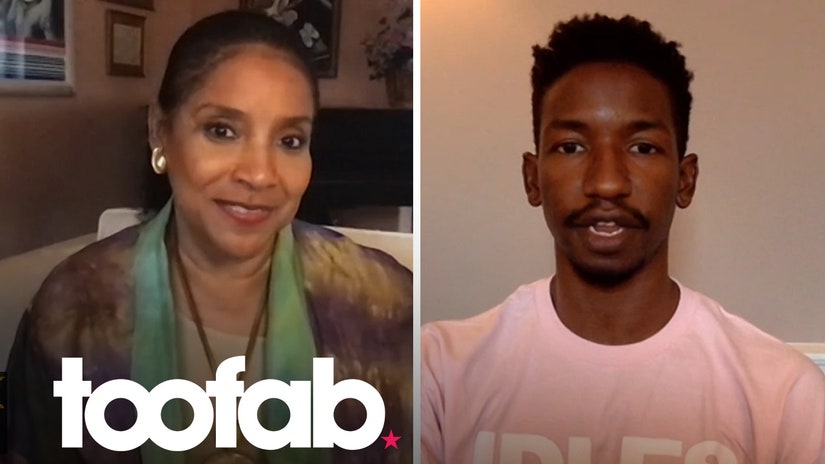 When asked about Gold’s comment, Rashad told TooFab she doesn’t necessarily see her doctor as the bad guy.

“The first thing we’re taught in our acting classes is never judge a character. So, I didn’t think of her as sinister,” she explained. “I explored her as a woman of developed intellect, and professional experience with a very clear objective that was married to a personal agenda.”

All four “Welcome to the Blumhouse” films come from a diverse group of filmmakers, with “Black Box” having key Black voices on both the cast and crew. While Athie said that “certainly is a factor” in why he was interested in doing the film, it wasn’t the main draw for either of them.

“Typically, like if I’m not into it then I’ll support it with those elements, but it has to be something that I really believe in,” added Athie. “That certainly is a factor, don’t get me wrong, it’s a huge factor. But, you know, it’s who am I working with? What is the material? And when you get to work with somebody like [director Emmanuel Osei-Kuffour Jr.] and Mrs. Rashad, it’s a no brainer.”

Prime Video will certainly keep horror fans entertained this Halloween, but when asked for their favorite freaky films to watch this time of year, both “Black Box” stars leaned more toward the nostalgic than anything current.

“Charlie Brown Halloween specials is the one for me,” Athie said with a laugh. “It’s all I need. Halloween … some pumpkin spice!”

“I like the old Boris Karloff, Bela Lugosi films, because they take me back, they take me down memory lane,” said Rashad. “And I watched them on television as old movies, you know? My older brother introduced me, ‘You’ve got to see … Oh this is coming on … you got to see Frankenstein.'”

“I don’t get so caught up in the horror of it, as it takes my back to a time in my life that I remember as wonderful,” she added. “Isn’t that interesting that I would equate that with a horror film?”