Historians have criticised federal Education Minister Alan Tudge for “playing politics with Australian children”, warning that his push to make the national curriculum more positive about the nation would not give students a full account of the past.

Mr Tudge maintained he wanted school children to be taught an “accurate” account of Australian history, as he redoubled his criticism of the draft national curriculum on Friday, saying it presented a “negative, miserable view of Australia”. 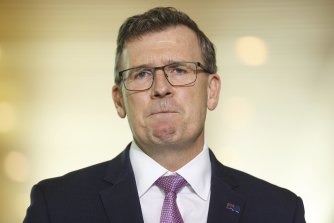 Minister for Education and Youth Alan Tudge during a doorstop interview at Parliament House in Credit: Alex Ellinghausen

Professor Melanie Oppenheimer, president of the Australian Historical Association, the peak national body for historians, said there was a “very strong belief” among historians that Mr Tudge’s comments were not helping the debate.

“He is playing politics with Australian children. It is unhelpful what he is doing,” Professor Oppenheimer, the chair of history at Flinders University, said.

“History is meant to be an accurate reflection of the past and not everything that happens in the past is rosy and happy. He’s asking us to present something that’s just not true.

“We want children to leave school being able to understand their past and understand where they’ve come from in all the complexity.”

Mr Tudge said although he had not seen the latest version of the draft curriculum, he had been briefed on some revisions, and his assessment overall was that it had “gone from an F to a C, but Australian students deserve an A plus.”

He welcomed some changes, including more emphasis on phonics in the English curriculum, the reintroduction of teaching timetables in Year 3 mathematics rather than Year 4, and the inclusion of references to Australia’s Christian heritage. But he repeated his push for the history curriculum to be overhauled.

“It doesn’t present the positive, optimistic view of modern Australian and nor does it provide the underpinnings of the origins of a modern liberal democracy. I just think that is so important for kids to understand.” Mr Tudge said on Friday.

“I put it to you that today, our society is the wealthiest, most liberal, most egalitarian and most tolerant society that has ever existed in all of humankind, anywhere in the world.”

Geoffrey Blainey, described by Mr Tudge as Australia’s “greatest living historian”, has also expressed criticisms of the draft curriculum, telling The Australian ”the condemnation of this country has gone too far” and “Australia on the whole is a success.”

One of Mr Tudge’s key complaints is that the curriculum proposes to teach Anzac Day as a “contested idea”, arguing it should instead be taught as “the most sacred day in the Australian calendar”.

Military historian Peter Stanley, a professor at UNSW Canberra, said it was possible for students to form a positive view of Australia while teaching negative perspectives and accounts of key historical events.

“Mr Tudge says Anzac Day is not a contested idea, but many people disagree, which means it is a contested idea,” Professor Stanley said. “Education means allowing people to make their own minds up. It doesn’t involve telling people what the answers are.”

“Isn’t it ironic that he’s lauding liberal democracy, but he wants to push a totalitarian view of history that exists in countries like North Korea, where there is only one story of North Korea’s history and it is told by the regime.”

Neil James, executive director of the Australia Defence Association, said all historical debate was contestable – and perspectives on ANZAC Day may shift over time – but facts should prevail.

“It’s the quality of the contestable debate that counts. Ideologues on both sides of the political spectrum will only talk about the things that suit their ideology. They won’t talk about all the facts involved,” Mr James said.

The independent Australian Curriculum, Assessment and Reporting Authority is in the process of finalising the draft document after a 10-week consultation period. Mr Tudge and the state and territory education ministers are required to sign off on it before it can be implemented.