Save articles for later

Add articles to your saved list and come back to them any time.

Five Indigenous Australian leaders have delivered a powerful call to action, reading the Uluru Statement from the Heart on the closing track of Midnight Oil's new album.

The 12-paragraph statement outlines a path for recognising Indigenous Australians in the nation's constitution and was endorsed in 2017 after a major consultation process.

The words of the leaders are underscored with guitar from the band's Jim Moginie and Martin Rotsey. In an accompanying video, artists Laura Paige and Hamish McBride, from Apparition Media, paint mural portraits of each leader, their faces adorned with traditional facepaint. 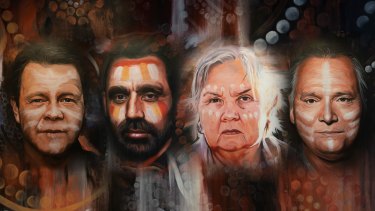 Portraits of Troy Cassar-Daley, Adam Goodes, Pat Anderson, Stan Grant were painted as part of a recording of the Uluru Statement from the Heart.Credit:Apparition Media

“Look, if you’re not moved by this I don't know what in the world would move you,” Aunty Pat said. “It is extremely powerful hearing those voices and seeing that collection of Aboriginal people and just the power of the words themselves.

“The Uluru Statement from the Heart is the latest in this long struggle for the Australian people to hear us, to understand us, to be kind, to be loving and inform themselves."

Goodes said he hoped the recording would put pressure on the federal government to address and respond to the statement.

“The Uluru Statement From the Heart is a gift to the Australian people that has never been properly received,” he said. “To me this gift is the way forward for our nation to truly reconcile. We need all Australians to read it, hear it and share it.”

The Uluru Statement includes a proposal for a First Nations Voice to Parliament enshrined in the constitution and the establishment of an advisory body of First Nations traditional owners called the Makarrata Commission.

“I’m from Queensland and here there’s laws that protect Queenslander houses from being pulled down but there’s nothing to stop them chopping down an ancient tree,” Cassar-Daley said. “I would love a guaranteed voice in parliament, a voice that’s not under a political banner. If that’s what came of this it would at least give Indigenous Australia a voice.”

The Makarrata Project is Midnight Oil's first new album since 2002's Capricornia. Frontman Peter Garrett has said the album is an exploration of Aboriginal and Torres Strait Islander people's ongoing quest for recognition and justice.

Midnight Oil’s The Makarrata Project is out now via Sony. For more information on the Uluru Statement from the Heart visit ulurustatement.org