Save articles for later

Add articles to your saved list and come back to them any time.

Victoria's Premier has insisted the state's gaming regulator will "do what needs to be done" if action is required against Crown Resorts, once a NSW inquiry into the gaming giant is complete.

But Daniel Andrews has ruled out acting on the probe's findings until the NSW regulator's final report into Crown is handed down, despite lawyers for the inquiry arguing the company had either engaged in or turned a blind eye to money laundering. 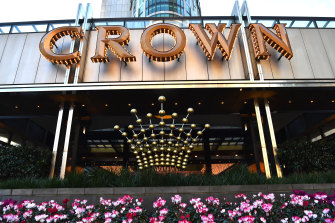 Victoria will wait until the NSW inquiry hands down its final report in February to determine its next step. Credit:Joe Armao

Victorian Opposition Leader Michael O'Brien has questioned why the Victorian Commission for Gambling and Liquor Regulation was waiting for NSW authorities before it investigates allegations into, and makes recommendations about, Crown's dealings in Melbourne.

Mr O'Brien said the commission was acting like a "toothless tiger", despite having extraordinary powers to police the industry.

After being closed for months due to Melbourne's lockdown Crown Casino, which has operated in Melbourne since 1994, will reopen on Monday under further easing of coronavirus restrictions announced by Mr Andrews on Sunday.

It will be allowed to open 10 separate rooms, with a maximum of 10 people per room, for electronic machines and gaming tables only.

He said the VCGLR would wait until February to consider the recommendations made by the NSW Independent Liquor and Gaming Authority inquiry.

Counsel assisting Adam Bell, SC, last week told the NSW Independent Liquor and Gaming Authority that evidence presented during 48 days of public hearings showed Crown was not a "suitable person" to hold a casino licence in the state.

"What's best for me to do, and what all of us needs to do, is to wait out and see what that report is and then our regulator will look at that, and any other information, not just about this company but about any company that was involved in the holding of those licences."

The NSW probe followed a series of reports in The Age, Sydney Morning Herald and 60 Minutes that revealed many of the junkets Crown worked with had clear links to Asian triad gangs.

Mr Andrews insisted the VCGLR was working "very hard" and it would "do what needs to be done" once it sees the inquiry's final report.

In August, the VCGLR issued Crown with a notice to show cause why the gambling company should not be disciplined over its dealings with high-roller tour operators linked to Asian organised crime groups – 14 months after the Andrews government had demanded an "urgent" review.

The opposition's Mr O'Brien questioned why the VCGLR was waiting for NSW authorities before acting.

"We have not seen Victoria's regulator lift a finger to test those claims the same way the NSW regulator has done," Mr O'Brien said.

"It's time for Victoria's regulator to get out of the kennel and start being a watchdog, not a lap dog."

Counsel assisting Scott Aspinall last week told the inquiry it was clear from numerous instances of money laundering examined during the probe that Crown had a culture which "either facilitates money laundering or is recklessly indifferent to whether or not it occurs".

"An available finding is that Crown Resorts… did engage in money laundering, in the sense that they became involved in or facilitated or enabled money laundering to occur within the casinos or through [its] accounts," he said.

Mr Aspinall said Crown "could not be trusted" to make sure those failures did not happen again. Whether Crown allowed money laundering to happen because of "ineptitude" or "reckless indifference", neither was compatible with it holding a casino licence, he said.

The inquiry has examined Crown's failure to prevent money laundering at its casinos; business partnerships with figures linked to organised crime; how it put its staff at risk in China before 19 employees were arrested and 16 jailed there in 2016; and the sale of Crown shares by James Packer's private company Consolidated Press Holdings to Melco Resorts, which may have violated the company's NSW casino licence.

The VCGLR and Crown Resorts were contacted for comment.

Get our Morning & Evening Edition newsletters