Harry reveals more than he should! Duke of Sussex flashes his abs as he cheers on athletes during Invictus Games

Prince Harry appeared to be enthralled in a match this evening as he enthusiastically cheered on athletes on the fifth day of The Invictus Games.

The Duke of Sussex, 37, seemed absorbed in today’s sporting event as he watched Britain take on the US in the gold medal match the wheelchair rugby from Zuiderpark.

At one point the royal’s polo shirt was compromised to expose the lower part of his stomach as he spurred on competitors and was seen eagerly chatting to fellow audience members about the game.

The match, which ultimately saw the US take victory over the UK, is one of a series of adaptive sports involving 500 service members from 20 different countries at the Hague in the Netherlands. 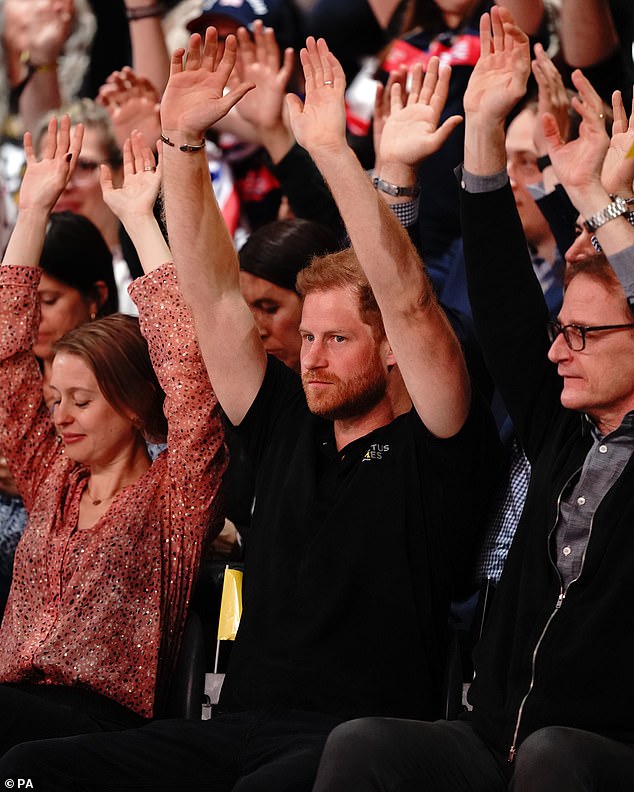 The Duke of Sussex, 37, seemed absorbed in today’s sporting event as he watched Britain take on the US in the gold medal match the wheelchair rugby from Zuiderpark 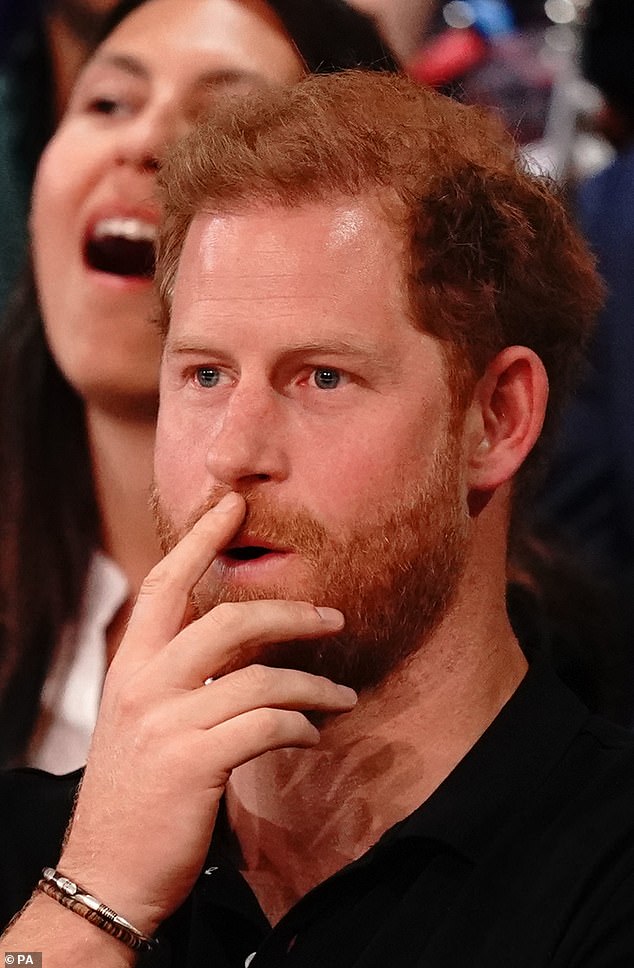 Harry is a fan of the sport and at the 2014 event in London’s Queen Elizabeth Olympic Park took on cousin Zara Tindall for a match.

Earlier today Harry chatted with a retired Army staff sergeant from the US team who suffered a devastating spinal cord injury and started playing wheelchair rugby just two weeks after his injury.

The chat was part of the Duke’s his latest interview on US television in which he insisted that he talks with the Queen ‘about things she can’t talk about with anybody else’.

He also placed doubt over whether he would attend his grandmother’s Platinum Jubilee celebrations in London in June amid the ongoing security row with the UK’s Home Office, adding: ‘Home for me now is, you know, for the time being, it’s in the States. And it feels that way as well.’ 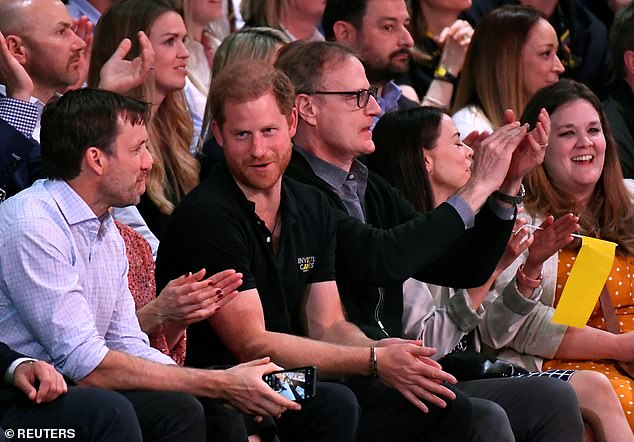 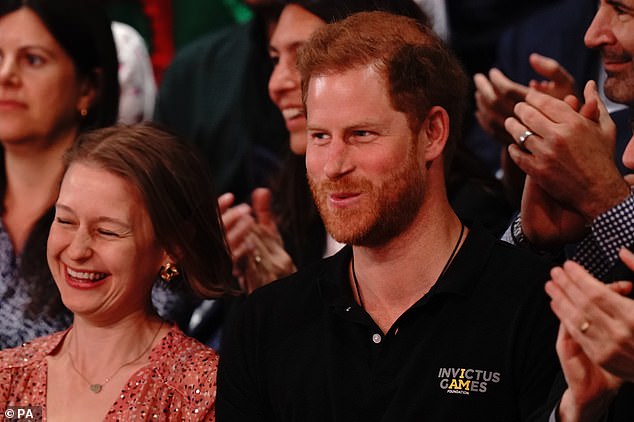 This comes despite his lawyers telling the High Court in February of the UK: ‘This is and always will be his home.’

The Duke also said he and his wife Meghan Markle had been ‘welcomed with open arms and we have such a great community up in Santa Barbara’ in California.

And Harry spoke about his mantra of ‘trying to make the world a better place for my kids’ while explaining his fears that he could face ‘burnout’ while working from home at his £11million mansion in Montecito, California.

In addition, he praised the Queen’s ‘sense of humour’ and spoke of their ‘really special relationship’ following their surprise meeting at Windsor Castle last Thursday where he had tea with her and his wife Meghan Markle.

And, talking about his late mother Princess Diana, Harry told NBC’s Today that he feels her ‘presence in almost everything that I do now’ and that he talks to his son Archie about her and there are photos of her in their home. 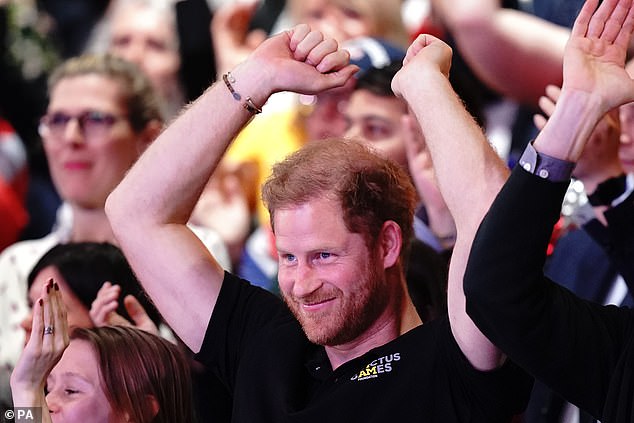 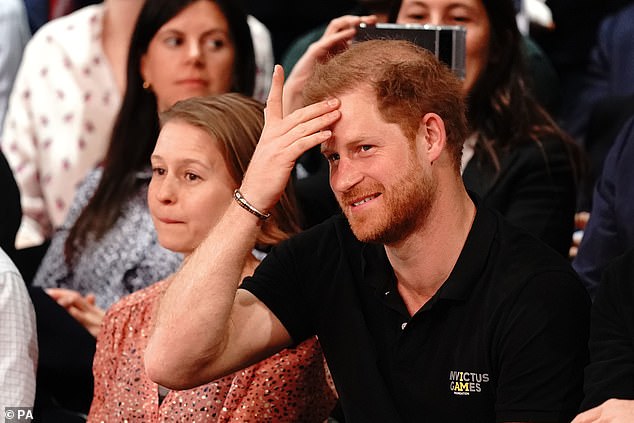 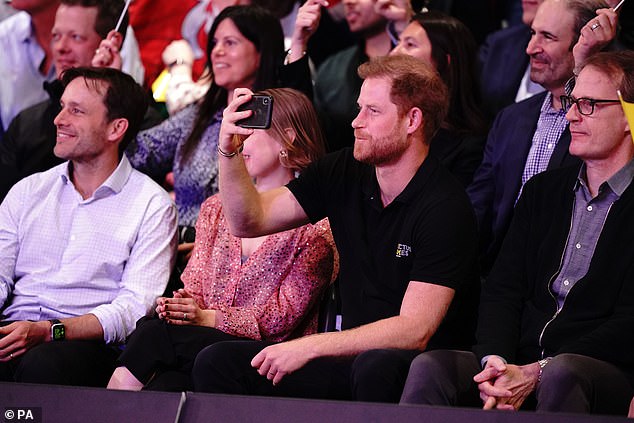 And asked about the Jubilee celebrations, he said: ‘I don’t know yet. There’s lots of things with security issues and everything else. This is what I’m trying to do, trying to make it possible that I can get my kids to meet her.’

But when questioned over whether he misses Charles and William, the Duke was keen to swerve the subject, telling presenter Hoda Kotb: ‘For me at the moment, I’m here focused on these guys [Invictus athletes] and these families and giving everything that I can, 120 per cent to them to make sure they have the experience of a lifetime.

‘That’s my focus here. And when I leave here, I get back and my focus is on my family who I miss massively.’

His visit to the Games with Meghan – who has since left The Hague to return to California to look after Archie and Lilibet – was the first time the couple had been seen together publicly on this side of the Atlantic for two years.