The 2022 Grammy Awards delivered some pretty amazing moments, but our favorite might be Questlove’s dig at Will Smith over his infamous Oscars slap.

Questlove got a warm reception at the 2022 Grammy Awards on April 3, just one week after his Academy Award win for Summer of Soul got overshadowed by Will Smith slapping Chris Rock on stage. The documentary also won a Grammy on Sunday for Best Music Film, and Questlove took the stage to present the award Song Of The Year. It was during his time on stage, though, that Questlove took a dig at The Fresh Prince Of Bel-Air star and everyone applauded him inside the MGM Garden Arena in Las Vegas.

“I’m gonna present this award and I trust you people stay 500 feet away from me,” Questlove joked, before saying he was, “Just playing.” While Questlove didn’t name Will Smith, it definitely appeared as though he was mocking Will’s decision to storm the stage at the Oscars after the comedian made a joke about his wife, Jada Pinkett-Smith‘s, bald head.

Before Questlove’s dig, host Trevor Noah took his own shot at Will Smith and the whole slapping incident. As the Daily Show host described the events of the night to come, he promised that “this is a concert where we’re giving out awards”. He also assured viewers that “we’re gonna be keeping people’s names out of our mouths” — a clear reference to Will yelling at Chris from the Oscars audience and saying, “keep my wife’s name out of your f***ing mouth.” 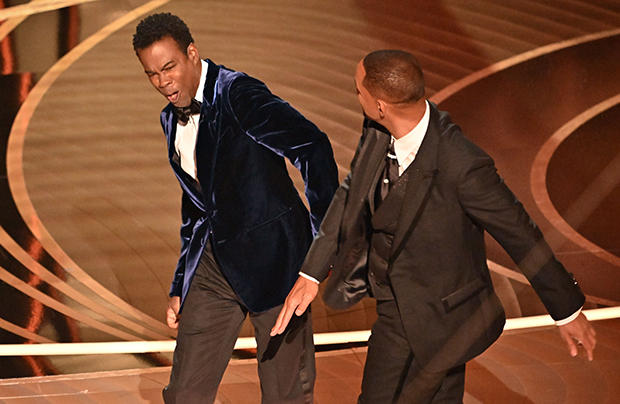 In the week that followed the Oscars slap, Will apologized to Chris and resigned from The Academy, but that hasn’t stopped people from making jokes about the incident. Even Saturday Night Live poked fun at the slap heard ’round the world.