Allegations that a serving cabinet minister has been accused of raping a 16-year-old girl three decades ago are shocking. The accusation deepens the wounds of the past fortnight, in which the treatment of women in political circles made headlines but, more importantly, again highlighted how far we have to go to eliminate sexual harassment and assault against women.

The ABC revealed the historical allegation on Friday night. NSW Police released a statement saying its abuse and sex crimes squad had received a complaint from a woman in February last year and had commenced an investigation. While the woman spoke to police initially, she did not make a formal statement. She died by suicide a few months later, and the investigation was suspended. 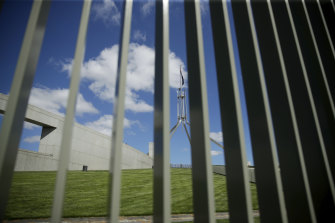 The culture in Parliament House is now under serious scrutiny.Credit:Alex Ellinghausen

Police point out that it is a matter for the individual to decide whether to pursue a complaint against an alleged perpetrator, but anyone with even a passing interest in the process knows that taking such a step can be incredibly difficult for many women.

This case is tragic on many levels – that the woman felt able to make a complaint only 12 months ago despite her alleged experience as a 16-year-old in 1988; that she has since died; and that the there is little if any chance that the truth or otherwise of what happened will ever be established.

The allegation became public after a letter revealing the history of the case was sent to Labor senator Penny Wong and Greens senator Sarah Hanson-Young.

The letter’s anonymous authors say they are the woman’s friends and urge Prime Minister Scott Morrison to launch an independent parliamentary investigation akin to the High Court’s inquiry into Dyson Heydon’s predatory sexual harassment. As well-meant as the suggestion may be, the idea that the Parliament is the proper body to investigate an accusation of a serious crime that allegedly happened long before the cabinet member entered politics and when his accuser is deceased seems unwise.

South Australian Police is preparing a report into the circumstances of the woman’s death for the coroner, who will determine whether to conduct an inquest. That would be thorough and non-political, and a preferable way to investigate what led the woman to take her own life.

The alleged perpetrator has not been named but the nature of the story means there is much speculation as to his identity. Issues around identification of alleged victims, defamation legislation and other factors mean the media’s ability to name him is restricted. Similar issues have so far prevented the naming of the alleged perpetrator in the other case roiling politics. Former Liberal political staffer Brittany Higgins accused a colleague of raping her in a parliamentary office in March 2019. She has now made a complaint to police.

These are fraught and painful issues. Our legal system is imperfect, and only one in 10 reported cases of rape results in a conviction. Those who have been through the system say they can feel attacked all over again by the court process. But whatever its shortcomings, the founding principle of Australia’s justice system is a precious one: all people are innocent until proven guilty. There have been considerable changes in the police and court system to minimise trauma to sexual assault victims and if we can do more, we must do more. But in this case, given the woman’s death, it is impossible for the accused to have an opportunity to defend the allegations in court.

There is our justice system, and then there is politics. The accused’s ability to continue as a cabinet member will be under enormous strain due to the allegations and the weeks of publicity that will accompany them. But we cannot have a society in which the court of public opinion holds sway over due process, as flawed as it sometimes can be. What we can and must do is the deeper work revealed by all this pain: end the attitudes towards women that entitle some men to believe that sexual gratification is somehow their right.

Note from the Editor

The Age’s editor, Gay Alcorn, writes an exclusive newsletter for subscribers on the week’s most important stories and issues. Sign up here to receive it every Friday.