The ability of religious schools to discriminate in favour of hiring teachers of faith will be given further protection under contentious draft religious discrimination laws, adding to schools’ existing rights to expel staff and students because they are gay. 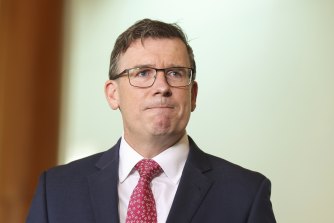 “The bill will certainly allow religious schools to employ people of their own faiths,” Mr Tudge told Sky News on Wednesday.

He said the bill would override state legislation “where required”, saying this ability was “under threat” in Victoria where the state government has announced plans to pass laws to prohibit religious schools from sacking or refusing to employ teachers because of their sexuality or gender identity.

“We are keen to see provisions in the legislation that allow religious schools to require employees to act in their roles in ways that uphold the ethos and values of that faith,” Ms Collins said.

Adding to the confusion, when asked what would happen if a Catholic school rejected a teacher because they were gay, Mr Tudge said: “that wouldn’t be lawful under our bill” – prompting LGBTIQ advocacy group Equality Australia to condemn his remarks as “misleading”.

The final version of the bill has not yet been seen by the Coalition party room, but government sources, speaking on the condition of anonymity, said there would be no changes that displaced a special exemption in the federal Sex Discrimination Act that makes it lawful for religious schools to discriminate against LGBTI staff and students, including by sacking or expelling them.

A spokesperson for the Victorian government said it would wait for the Commonwealth legislation to be enacted and then “carefully review any gaps in protections for Victorians”.

It has been more than three years since Prime Minister Scott Morrison pledged in 2018 to pass laws abolishing the exemption allowing religious schools to expel gay students, following public outcry over the recommendations of Philip Ruddock’s review into religious freedom. The government back-tracked on that promise later in 2018 and referred the matter to the Australian Law Reform Commission for a review, after failing to agree on a deal with then Labor opposition led by Bill Shorten.

The review has been delayed multiple times, with the ALRC now expected to report its findings 12 months after the passage of the religious discrimination bill.

In a letter to ALRC President Sarah Derrington on Wednesday, Attorney General Michaelia Cash said she was committed to introducing the religious discrimination bill into Parliament during the final two sitting weeks of the year. Senator Cash said it remained the government’s position that no child “should be suspended or expelled from school on the basis of their sexuality or gender identity” and she expected the ALRC’s review to provide detailed drafting to give effect to this.

“In my consultations to finalise development of the religious discrimination bill, I have heard from a range of stakeholders across Australia and there is strong public support for this position,” she wrote in the letter.

Labor declined to comment on the foreshadowed elements of the bill, with Shadow Attorney-General Mark Dreyfus saying the party would wait for it to be introduced into the Parliament before determining its position.

“As we have repeatedly made clear to the Attorney-General and her predecessor Christian Porter, we are ready to work with the Government on a religious discrimination bill,” Mr Dreyfus said.