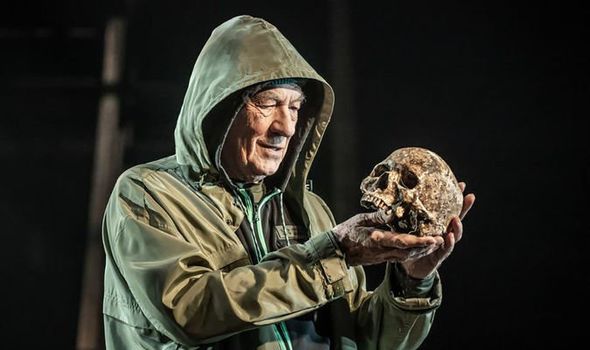 Sir Ian McKellen brings the gravitas of a world-weary scholar ‑ a very mature student ‑ to this Hamlet. It’s 50 years after his last attempt and he inhabits the role with consummate ease. Not given to intemperate outbursts of youth, McKellen’s Great Dane is a man of reason forced into questioning his philosophy. And with his black singlet and exercise bicycle, and natty scarf flung around his neck, he has a very student-like air that belies his age.

Theatre is about creating illusions after all and this age/colour/genderblind production is a conspicuous reflection of our mixed-up, shook-up times.

McKellen is so assured that his age becomes immaterial after about five minutes. But the early promise of a Gothic, cartoon-like character ‑ he appears first in Victorian funeral garb of top hat, dark glasses and a frock coat like an Edward Gorey illustration ‑ is soon banished.

Exercise bikes, hoodies and knives take over in a semi-modernised production conducted on a gantry-like set that resembles a provincial railway station more than Elsinore Castle.

Francesca Annis gives a great ghost (of Hamlet’s father) but is under-used.

Jonathan Hyde is a silky-smooth Claudius, while Jenny Seagrove’s Gertrude is a portrait of Teutonic starchiness.

Having assembled a wilfully diverse cast, director Sean Mathias misses his chance to do anything extraordinary with it (aside from an obsession with hair and wigs) and the lack of a cohesive vision drains the play’s energy, although the sweltering heat on the press night didn’t help.

The Players’ scenes and the graveyard scene are exceptions, however, and kick everything up a gear. It is McKellen’s night, and rightly so. I just wish he had a more highly tuned vehicle to support him.