Now that’s what I call a high-wage economy. Farmers are offering to pay people £30 an hour to pick broccoli.

As Yosser Hughes in Alan Bleasdale’s Boys From The Blackstuff used to say: I could do that, gissa job!

Thirty quid an hour is more than three times the national minimum wage.

Over a typical 40-hour week, it works out at an annual salary of more than £60,000. Cabbage pickers can expect to earn the same, as agricultural employers attempt to plug staff shortages of up to 75 per cent.

This fabulous ‘trebles all round’ deal is being dangled in Boston, Lincolnshire, one of the cheapest places to buy a house in Britain.

Maybe it’s all part of Boris Johnson’s cunning ‘Levelling Up’ agenda. Soon our green and pleasant country lanes will be jammed with farm labourers tooling round in Teslas and drinking scrumpy from Waterford crystal champagne flutes. 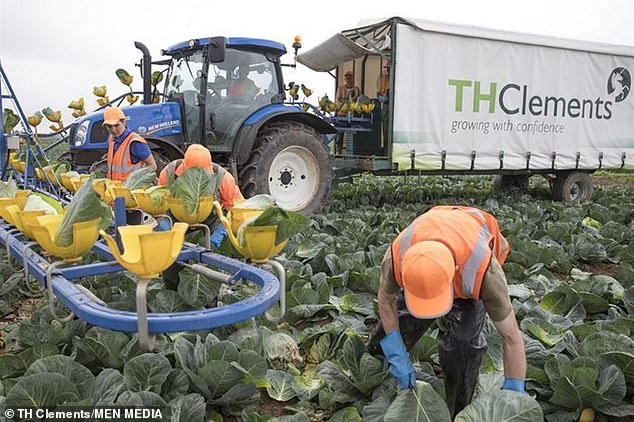 Farmers are offering to pay £30 an hour to pick broccoli. Thirty quid an hour is more than three times the national minimum wage. Pictured: Cabbage pickers at TH Clements and Son

Higher wages for British workers are supposed to be part of the Brexit bonus, as cheap foreign migrants return home.

If Boris had plastered ‘£30 an hour for picking broccoli’ on the side of his Vote Leave battle bus, instead of ‘£350 million a week for the NHS’, he’d have won by a landslide, never mind 52-48.

Significantly, Boston was the most Brexity town in Britain during the referendum.

More than 75 per cent of the population voted to leave, largely because of uncontrolled Eastern European immigration which had transformed the area into a suburb of Gdansk and forced down pay.

So why shouldn’t they reap the benefits? What’s not to like?

Well, that all depends on how much consumers are prepared to fork out for their broccoli fix in future.

This week, Tesco was flogging a single loose head of broccoli for a very reasonable 49p. But once farmers are having to pay £30 a hour to people to pull the stuff out of the ground, how many takers will there be as prices rise to reflect the cost of production?

The knock-on effect will be that broccoli — once a fairly cheap source of iron, protein and calcium — becomes a luxury item, right up there with caviar and truffles.

Last year, there were reports that some restaurants were charging at least £25 for a so-called chargrilled cauliflower ‘steak’.

How long before broccoli costs as much as one of Salt Bae’s £1,450, gold-plated ribeyes, currently attracting the more-money-than-sense crowd to a new eatery in London? 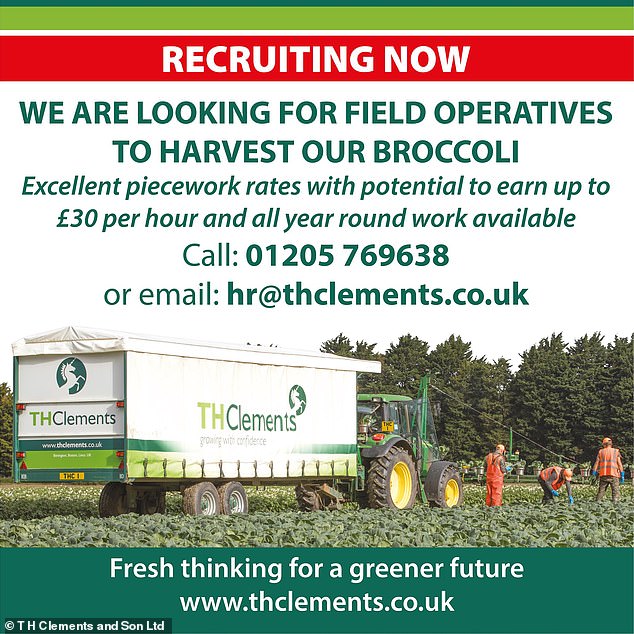 This fabulous ‘trebles all round’ deal is being dangled in Boston, Lincolnshire, one of the cheapest places to buy a house in Britain. Pictured: TH Clements and Son advert

And when that happens, popular demand will plummet and the vegetable pickers of Lincolnshire will be lucky to get £30 a day, let alone an hour. It’s not as if farmers are coining it right now. Jeremy Clarkson made a profit of about £1.40 last year. But thanks to Boris, this time next year, Kaleb, we’ll be millionaires.

Or not, as the case may be. Farmers have more chance of becoming millionaires by going on Clarkson’s ITV quiz show.

They won’t be lining up to place orders for Lamborghini tractors, they’ll be lining up outside the JobCentre having flogged their land to Barratt Homes in a fire sale.

The reality is that offering people thirty quid an hour to pick broccoli is a panic measure, a temporary panacea in the teeth of a recruitment crisis. It is unsustainable long term.

Employers say the solution to the shortage of staff, not just in agriculture but in other sectors such as road haulage and hospitality, is to open the immigration floodgates again. That, too, would only be a temporary, retrograde measure.

As the Prime Minister made clear again this week, Britain has no future as a low-pay, low-skills economy dependent on cut-price labour from overseas.

His Government is about levelling up, not resorting to the lowest, defeatist denominator.

Business leaders protest, with some justification, that Boris is ignoring them. Then again, during my decade as an industrial correspondent, the CBI was wrong about virtually everything, including opposing Mrs Thatcher’s reform of Britain’s sclerotic economic orthodoxy and union-friendly labour laws.

Despite their recent, opportunist embrace of wokery, etc, employers are motivated primarily by self-interest, not the national interest.

I can remember a CBI conference in Glasgow, at which the boss of Dunlop took to the stage wearing a kilt and waving the Union flag in support of an I’m Backing Britain-style campaign. A couple of weeks later he sold off the company to the Japanese.

Boris is right to say that government can’t solve all the problems of business. But if he wants firms to pay higher wages, he has to get government off their backs and stop picking their pockets.

Despite Boris’s boosterism this week, his Government is pursuing policies which do the opposite. You don’t grow the economy by raising taxes and national insurance.

Companies can’t pay their staff more money when their bottom line is treated like a milch cow by the Treasury. 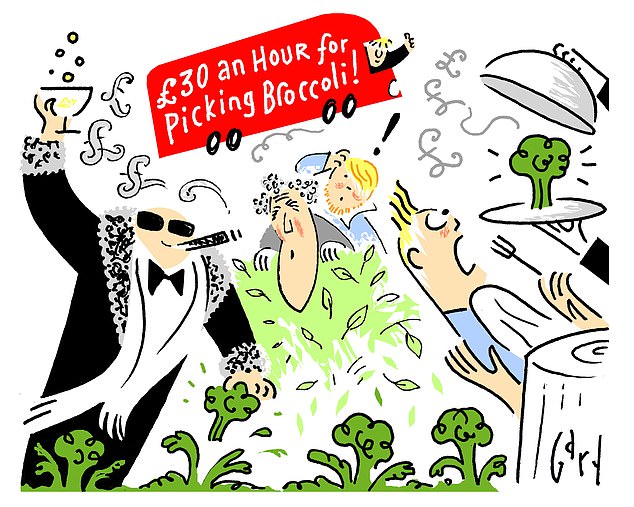 Over a typical 40-hour week, it works out at an annual salary of more than £60,000. Cabbage pickers can expect to earn the same, as employers attempt to plug staff shortages of up to 75% 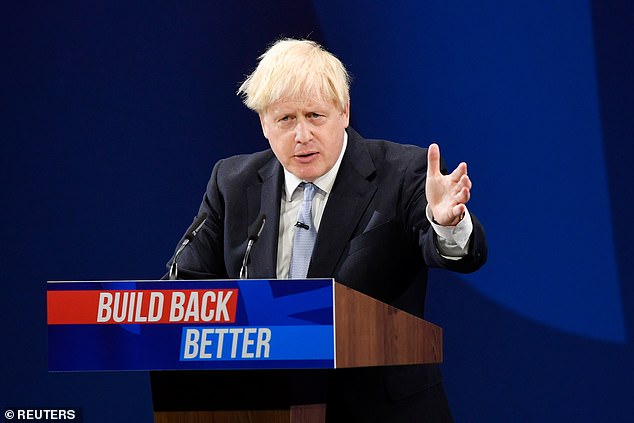 As the Prime Minister (pictured) made clear again this week, Britain has no future as a low-pay, low-skills economy dependent on cut-price labour from overseas

Boris may not be able to solve all business’s problems, but he has the power — if not the will — to make a difference closer to his home in Downing Street.

What is genuinely unsustainable is throwing billions at an unreformed NHS. Is he seriously suggesting there are no economies to be had in the top-heavy health service?

He could start by shutting down the wasteful, superfluous quango Public Health England — not replacing it with yet another agency which will prove just as thirsty for public money.

He can order civil servants back to their desks, starting with the DVLA — which is still largely ‘working from home’ and failing hopelessly to issue tests and HGV licences to lorry drivers.

As an example to other indolent civil ‘servants’, he should sack that ridiculous woman who boasts about running the Culture department from her Peloton exercise bike. Come to that, he should abolish her department altogether. We don’t need it.

Before putting a penny on tax or NI, ministers should have conducted a ruthless audit of costly projects like HS2 and taken a scythe to their own departments.

If that means tens, or even hundreds of thousands of civil servants being put to the sword, so be it. With a few notable exceptions, the civil service has been worse than useless during the pandemic.

See how they like ‘WFH’ when they’re not receiving their taxpayer-funded, index-linked salaries, gold-plated pensions and London weighting allowances.

It is a truth universally acknowledged: old white men should never dance in public, especially when they are going through a mid-life crisis.

No one seems to have told Michael Gove.

Following his extraordinary performance on the dance floor in Aberdeen, he was seen in Manchester jiving the night away with his Tory colleague Tom ‘Twinkle Toes’ Tugendhat. 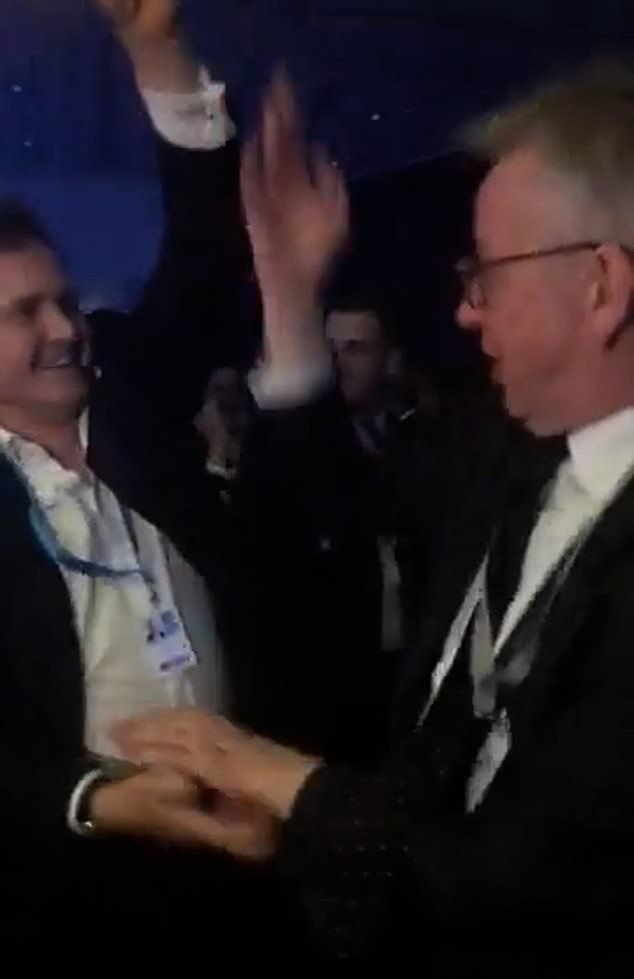 Following his performance on the dance floor in Aberdeen, Michael Gove was seen in Manchester jiving the night away with his Tory colleague Tom ‘Twinkle Toes’ Tugendhat

Perhaps they fancy themselves as the next same-sex couple on Strictly. Who knows?

Loved Boris’s ‘Jon Bon Govey’ jibe, even though it suggests that right now the Govester is livin’ on a prayer.

There’s one law for eco-mentalists, another for everyone else. If you cause mayhem on behalf of the polar bears, you can expect to be treated sympathetically by the police and the courts.

Yet if a bunch of Millwall fans glued themselves to the Old Kent Road to protest against illegal immigration, the Old Bill would turn the flame-throwers on them. The courts would have no hesitation in jailing them and throwing away the key.

In the latest affront to justice, that walking health hazard Swampy and his mates, who dug tunnels and built treehouses at Euston Station in an attempt to stop HS2, have been freed by a district judge — despite the fact that they cost developers £3.5 million.

Mind you, it might be that the judge was showing mercy to their potential cellmates.

I may have mentioned the time I followed Swampy into a lift at London Weekend Television, before getting straight out again.

The pong was staggering. It took three days to fumigate the lift.

Perhaps the judge didn’t want Swampy stinking out Wormwood Scrubs, too. Or digging another tunnel…