SARAH VINE: The idea that the Covid vaccine has been developed to turn us into zombie slaves for Bill Gates is highly unlikely… I won’t clap for anti-vaxx carers 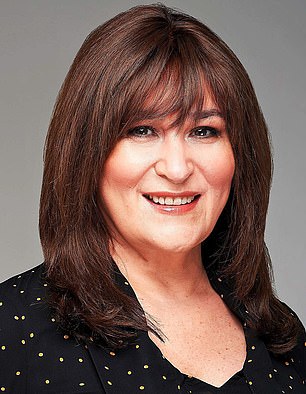 Sarah Vine, pictured, said on getting the jab: ‘I didn’t much want it either. But nor did I want my kids stuck at home for months, or not to see my parents for two years’

We live in an age of paranoia and conspiracy, where every event seems to mask some darker truth.

Take, for example, the terrible tragedy at a rap festival in Texas last weekend.

Eight people were crushed to death during a concert by Travis Scott, who appeared not to have realised fans were in trouble and — it is alleged — carried on performing even as people were dying.

It didn’t take long for festival-goers to post videos and pictures, accusing Scott of ignoring their desperate pleas.

Social media was alive with theories, claiming Scott had engineered the whole thing, that he was either a Satanist or a member of the Illuminati, and that the ‘sacrifice’ had been deliberate.

The truth will turn out to be much more banal. Scott does not seem an especially wholesome character, but Lucifer he is not.

Disorganisation and general incompetence on the part of the organisers could be the cause of this awful tragedy.

The problem with the truth is that it is often much less exciting than fantasy and, in a world where Instagram influencers seem to carry more weight than people with actual letters after their names, it’s easy to see how perceptions might get a little muddled.

After all, newspapers such as this one are compelled by regulation to stand up a story before they print it as fact; no such obligation exists on social media. Anyone can say what they want about whoever they like, and they do. 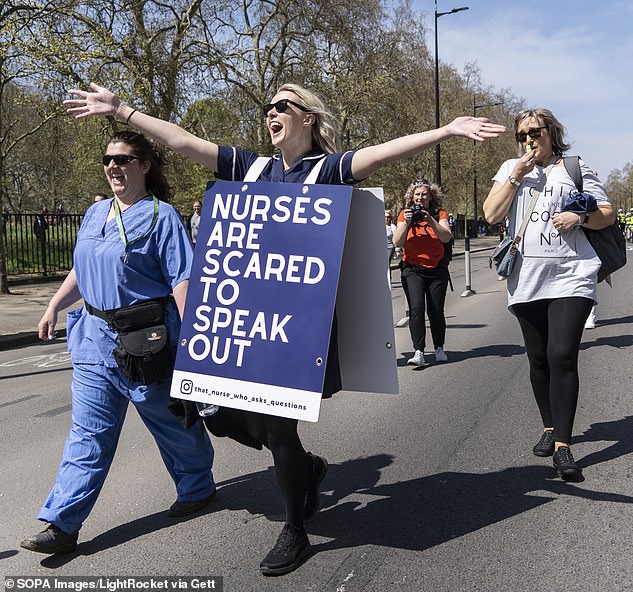 Some of 103,000 or so frontline NHS staff who have yet to receive their first dose and who, now the Government has said vaccination, from next April, will be a requirement of the job, are threatening to leave

Take your pick: the Queen is a lizard; the CIA invented Aids; Prince Charles is a vampire.

Any or all of these things could, theoretically, be true; but the overwhelming likelihood is that they are not.

In the same vein, the idea the Covid-19 vaccine has been developed to turn us into zombie slaves for Bill Gates is possible, but highly unlikely.

As is the notion it can alter your DNA, cause mutant strains of the virus or transform you into that ranting maniac Piers Corbyn.

It can, it’s true, cause extreme and very occasionally deadly reactions in a very small number of individuals; but so can paracetamol.

It’s certainly less dangerous, statistically, for the general population than, say, peanuts or shellfish, wasp stings or crossing the road.

Yet people would rather not have the vaccine because of some bonkers theory sent by a mate on WhatsApp than pay attention to the facts, or take the advice of the Chief Medical Officer or their own family doctor.

What’s really depressing — and frustrating — is that many of those buying into this nonsense are people you’d expect to know better. 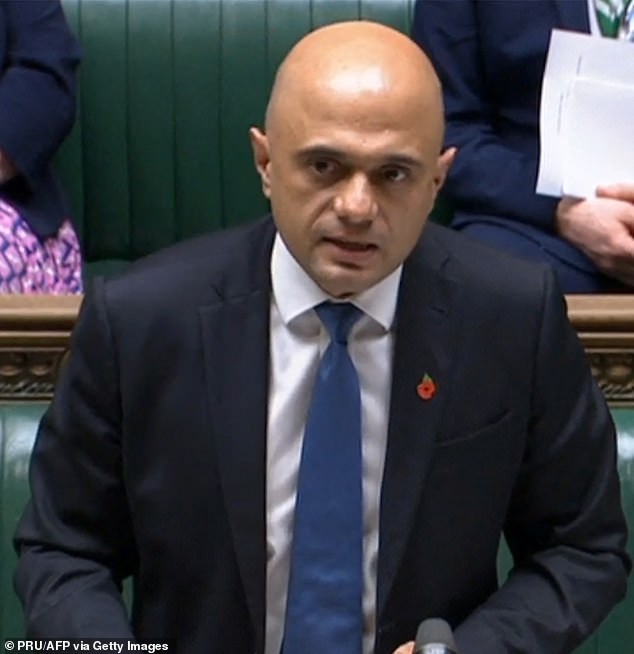 Namely, some of the 103,000 or so frontline NHS staff who have yet to receive their first dose and who, now the Government has said vaccination, from next April, will be a requirement of the job, are threatening to leave.

These are people who claim to be dedicated to serving vulnerable patients — but who, it seems, would rather risk infecting those in their care with a deadly virus than submit to a jab which has been administered to millions with almost no unfortunate repercussions.

Yet this jab is the reason society, which a year ago was in lockdown, is once again functioning. It’s why grandparents will be able to hug grandchildren at Christmas, why kids are at school, shops and businesses are open — and life, crippled by this pandemic, has returned to some semblance of normality.

I understand that some people don’t want the jab. Some have medical conditions that mean they can’t have it.

Some are fearful of side-effects. But some simply stubbornly refuse.

I didn’t much want it either. But nor did I want my kids stuck at home for months, or not to see my parents for two years.

But sometimes you have to put the greater good ahead of personal beliefs.

It’s called growing up, and it’s time the anti-vaxxers did just that.

The skinny on Diana

The Crown’s Elizabeth Debicki as Princess Diana in the so-called revenge dress has received gushing praise.

But she’s not a patch on the real Diana, whose appearance at a dinner on the night Prince Charles confessed his infidelity stunned the world.

I think the problem is Debicki looks painfully skinny, whereas Diana, while slender, was at that stage strong and athletic. Bad make-up or bad casting, I can’t tell. Either way, not a hit with me. 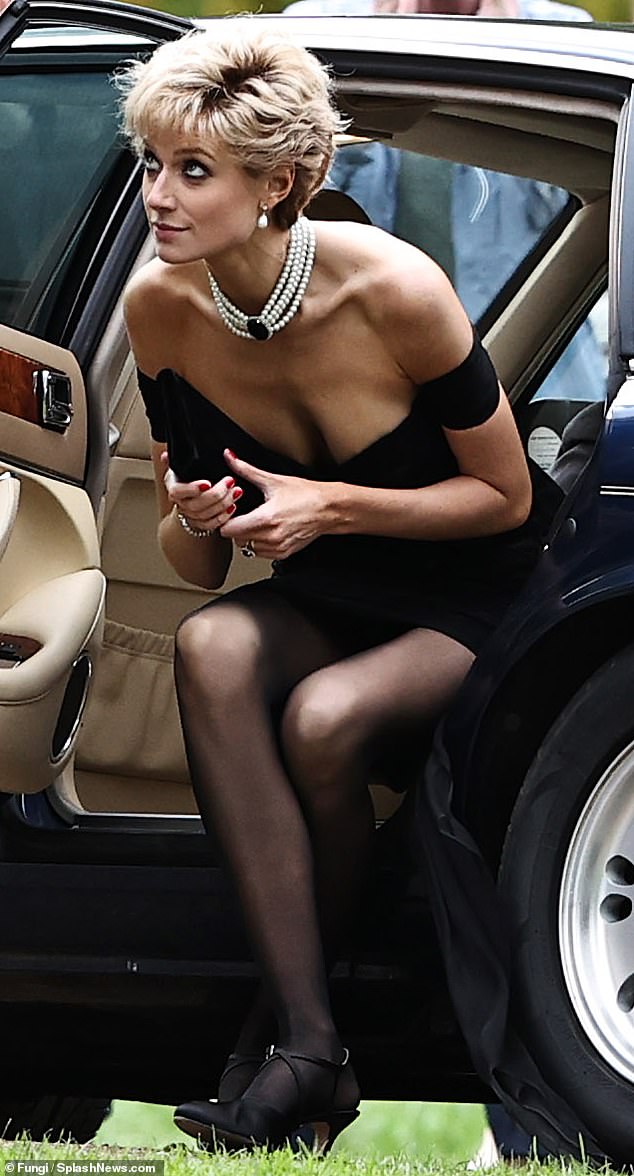 Apparently eating seaweed can reduce methane production by up to 90 per cent. Farmers plan to feed it to cows and sheep in a bid to reduce their carbon footprint.

I wonder if it works on teenage boys — or elderly American presidents.

I could barely contain myself when I read about Joe Biden’s alleged unscheduled emission in the presence of the Duchess of Cornwall at Cop26.

Still, those toffs are used to such behaviour.

It was Prince Philip, I think, who said of Princess Anne: ‘If it doesn’t fart or eat hay, she’s not interested.’

Hopefully, Camilla is cut from the same cloth.

While the Prime Minister wrestles with multiple problems at home, the Foreign Secretary Liz Truss is, it appears, living her best life. Looks as though her current tour of South-East Asia is turning out to be a Triumph in more ways than one. 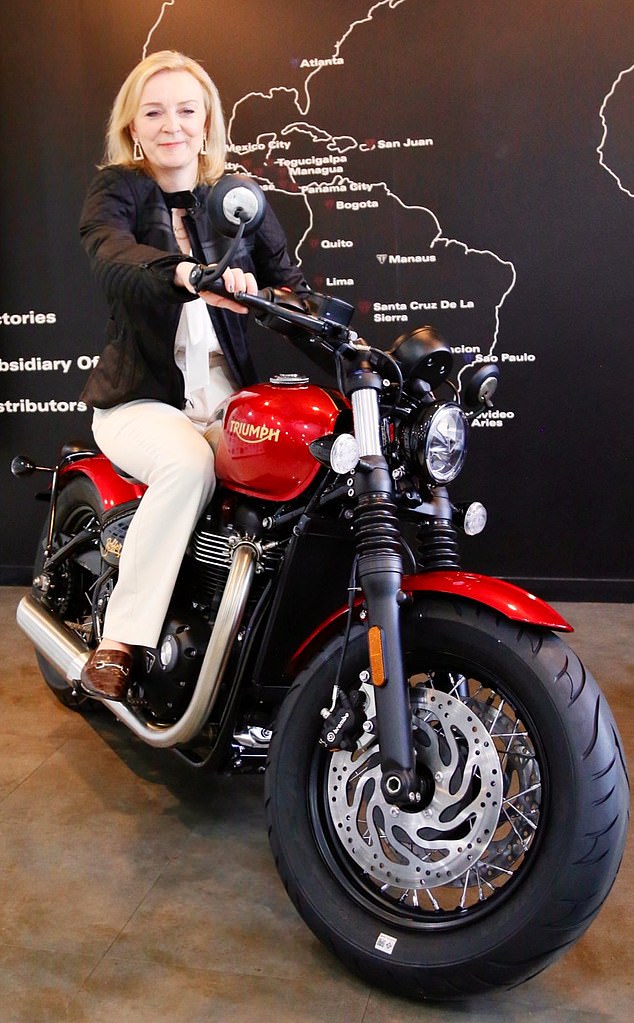 There’s definitely something in this latest study which found that people who go to bed between 10pm and 11pm are healthier than those who fall asleep after midnight.

I was a night owl — but a few years ago I started forcing myself to go to bed early. It’s changed my mood, and I also credit it with helping me lose weight, since I eat earlier, drink less — and don’t snack endlessly into the night.

After all, if I’m sleeping I can’t be eating (except in my dreams)!

Have you seen Amazon’s Christmas advert? The camera follows a young girl as she hangs out with friends and goes to college, looking pained and worried.

Meanwhile, Adele warbles in the background about hating herself.

Then a news clip plays on the radio about ‘rising cases of anxiety in young adults’, and the penny drops: Amazon has decided to harness the power of pandemic anxiety in young people to flog stuff at Christmas (in this case a bird feeder).

What a prime load of plum duff . . . a new low, even by the standards of a company that doesn’t pay its fair share of tax, treats its workers appallingly — and whose billionaire founder likes to lecture the world about climate change while firing rockets into space.

This week saw the launch of Dog TV, a channel aimed at entertaining house-bound pooches, based — apparently — on animal science. Actually, we already have such a thing in our house. It’s called a window. Stars of the show: the local neighbourhood cat and, of course, a supporting cast of squirrels, all providing hours of gripping entertainment.

I have endless sympathy for Richard Ratcliffe, husband of Nazanin Zaghari-Ratcliffe, who has been on hunger strike outside the Foreign Office for 18 days. Only someone who has exhausted all options would resort to such an extreme measure — especially since, were something to happen to him, the couple’s daughter would be left without either parent. Let’s pray it doesn’t go that far.

I’m afraid I’m not as excited as many women about the revival of Sex And The City, which will hit our TV screens next month.

It’s not that I don’t admire Sarah Jessica Parker (right) or appreciate the show’s high-fashion aesthetic; it’s just that I was never one of those dames who looked effortlessly fabulous in a size six sliver of Balenciaga.

Sarah Jessica Parker seen on the set of And Just Like That…, the follow up series to Sex and the City

The truth is, there’s more to being a woman than being a fashion plate, and it seems to me that Carrie never was — nor ever will be — much else.

That said, the new series might be brilliant — in which case I will just have to eat my Marks & Spencer pants.

Another tragedy involving an out-of-control dog, the victim this time a ten-year-old boy in Caerphilly, who heartbreakingly died of his injuries.

The animal in question has been described as a ‘crazed’ American pitbull-style terrier. I have no doubt that the dog was dangerous; but the real crazy here is whoever owned it and either trained it to be aggressive, or — most likely — lacked the skills to train it at all.

Some dogs are like cars: incredibly dangerous in the wrong hands. That’s why, like cars, you should be required to obtain a licence before being allowed to take charge of one.

A dog licence wouldn’t remove the threat entirely — some idiots would simply not get one — but they might deter morons from either neglecting their animals, or weaponising them, with devastating consequences.