The average book in the popular children’s series Spot, by Eric Hill, takes about five minutes to read, so a 45-minute live show was always going to be a challenge.

And yet, the cast, all on double duty – Kaplan Cabanas as Helen/mum Jess, Enya Daly as Spot/Jake and Christopher Vernon as Daddy Sam/Joe – does an excellent job keeping the mostly toddler-to-four-year-old audience and their guardians entertained. 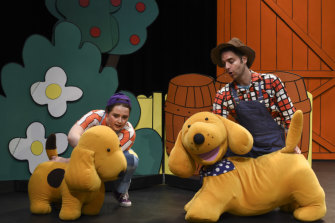 The premise of the show is simple but has a solid narrative. Jake’s parents, Jess and Joe, want him to do his chores on their farm, which in a cute feature of set design starts off black and white and “transforms” to colour as the storyline unfolds.

But Jake would prefer his parents read him a Spot book, which “good cop” dad Joe agrees to after some reluctance and speed reading – something every parent in the audience could no doubt relate to.

The actors do a good job of bringing the large, plush puppets to life without resorting to ventriloquism or trying too hard to conceal their own presence on stage. There are plenty of “oohs” and “aahs” when the adorable Spot first appears, while his best friend, a hippo named Helen, is the wisecracking sidekick to the more earnest title character. 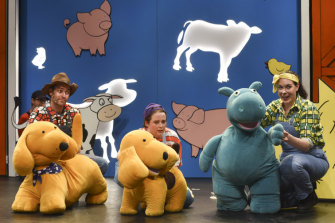 The story within the story sees the farm animals go missing, signified by illuminated outlines on the barn doors, with it falling to Spot and Helen to find and return them.

What ensues is a sweet and at times slapstick game of hide and seek that encapsulates plenty of interactive features for the little ones in the crowd: counting, animal sounds and a bit of adult silliness when the animal cut-outs are placed against the wrong spots in the barn.

Interspersed with the narrative are plenty of songs, including the catchy Working on the Farm is Fun, which adults in the theatre will no doubt be humming along to for days.