Sea turtles stay still to avoid detection by prowling tiger sharks, according to scientists who clamped cameras to the dorsal fins of the apex predator off the coast of Western Australia.

About 70 hours of footage was captured from the backs of four sharks – ranging between 2.8 and 3.5 metres long – at the World Heritage-listed Ningaloo Reef near Exmouth, with the recordings altered to replicate the black-and-white vision of the tiger shark.

The $10,000 video cameras attached to the shark also work like a smartphone, tracking the animal’s physical movements in the water, like its tailbeats, and where it travelled, which allowed researchers to study how it would react when it came across turtles.

Several instances mentioned in the resulting scientific paper, published in the Journal of Experimental Marine Biology and Ecology, reported tiger sharks swimming over the top of turtles without noticing them.

In other instances where a tiger shark came across a turtle swimming along the surface it might slow down or double back to try and find the creature, which makes up a big part of its diet at Ningaloo. 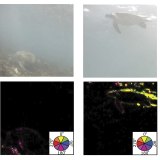 What a turtle looks like to a tiger shark on the seafloor and near the ocean surface at Ningaloo Reef.Credit:Journal of Experimental Marine Biology and Ecology

Dr Laura Ryan, a neurobiologist from Macquarie University who has studied how juvenile white sharks can confuse surfers for seals, said the tigers found it hard to detect turtles when they remained motionless and blended into the background.

This is because the shark could not see as well as a video camera or human, according to Ryan, meaning it had to rely on other forms of movement to find the turtles.

But turtles at Ningaloo – which include the green, hawksbill and loggerhead species – have better vision than a tiger shark and are more likely to detect it approaching from a greater distance.

This means the turtle’s best strategy for survival is to remain still, or bolt as soon as a shark notices them.

Stanford University marine biologist Dr Samantha Andrzejaczek, who co-authored the paper based on field trips from her time at the University of WA, said one of her conclusions was tiger sharks in the study area were exceptionally lazy. 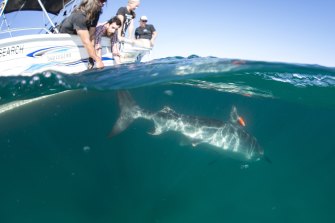 This was because the shark might have to be careful not to expend too much energy since they environments they lived in might be nutrient-poor.

“One of their favourite places to hang out is the shallow sand flats,” Andrzejaczek said.

“There’s clear water and they don’t have to move up and down that far.

“They’re negatively buoyant, so they sink down and beat the tail to go back up. 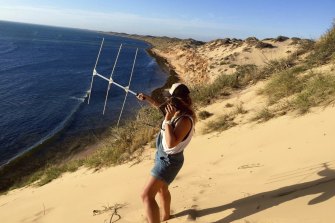 “They save energy any way they can … and it saves more energy to go down and up rather than stay at one level.”

Tiger sharks are known as the garbage disposals of the sea, with car tyres having been found in their stomachs at times, but very little is known still about many aspects of their lives including migration and breeding habits.

Andrzejaczek said tiger sharks were misunderstood in WA and deserved more attention for being keystone predators which played a role in keeping reefs healthy.

“When we worked in Ningaloo … we’d catch the shark and bring them alongside the boat,” she said. 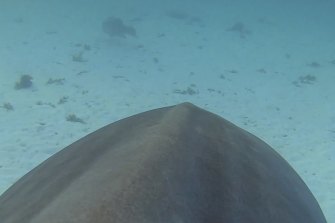 The $10,000 video cameras attached to the shark also work like a smartphone, tracking the animal’s physical movements in the water, like its tailbeats, and where it travelled.Credit:Samantha Andrzejaczek/UWA

“As we had them on the long side of the boat they didn’t move, they’re so docile and peaceful.”

Tiger sharks have been involved in several fatal interactions in Queensland, but few in WA.

A tiger shark was initially identified as killing a man in Broome in 2020 before DNA testing revealed it was a bull shark.

Another man in his 40s was bitten on the arm by a suspected three-metre tiger shark last year also near Broome.

Andrzejaczek said most of the time tiger sharks in WA tried to avoid people and would take off when you came near them in the water.