A boutique owner in Pennsylvania successfully tracked down a woman who donated her prom dress with a personalized note.

Jillian Nimick took to TikTok in mid-June to asks the public’s help in finding the original owner of a teal prom dress, which made its way to her from a third-party donor who had procured 25 bags of clothing and handed it over to Nimick’s Mt. Pleasant store, Nimi Boutique.

Out of that bunch, Nimick noticed the bedazzled, teal fit-and-flare gown had a handwritten note from the original owner but there was no name attached.

In a photo Nimick sent to Fox News, the original owner described she had gotten the gown from a sale rack because her family wasn’t going “to spend $300+ on a prom dress.” While she didn’t automatically fall in love with the dress, at first sight, she came around when she tried it on.

The letter also goes on to say she attended prom with her high school sweetheart and planned on getting married in 2020.

“I didn’t have the heart to just send this beauty to Goodwill. I knew she needed to have a greater purpose since the universe seemed to work so hard to get it to me,” the mysterious prom dress owner wrote. “Give her a chance.” 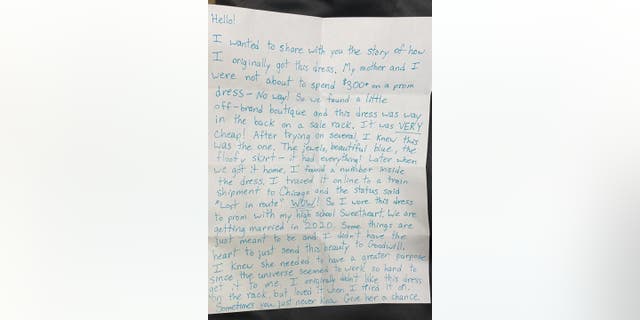 Jillian Nimick provided Fox News a photo of the letter she found attached to a teal prom dress, which was donated to her store Nimi Boutique. (Jillian Nimick)

In a video update five days after her original TikTok, Nimick told her followers the woman who owned the prom dress had contacted her on Facebook to identify herself.

Owner Found!! Thank you everyone! ❤️@officialnimiboutique

Her name is Shania Potosky of Norvelt, Pa. According to Nimick, Potosky attended prom in 2014 and did go on to marry her high school sweetheart in September 2020. It turns out, Potosky had actually donated her dress to another organization two years before it made it to Nimick.

“The dress has not found a new home yet. I’m thinking since prom season/special occasions have ended she will not find a new home till next year,” Nimick told Fox News via email. “But I will say she’s the dress that keeps on giving.”

Potosky did not immediately respond to Fox News’ request for comment on how she feels about her old prom gown finding a  new home soon.