Is THIS how to check if your Zara buys will fit at home? Fashion fans say labels have a secret ‘shape’ code signalling if a style runs small, big or true to size with a triangle, circle or square

A TikToker has claimed that Zara garments carry a secret code on labels that help explain how the item is likely to fit.

The TikTok style account, @wearherstyle, run by two style-loving sisters, claims to have cracked the meaning of three symbols that appear on labels on clothing made by the Spanish-manufactured brand.

In the video, which has racked up more than 75,000 likes and 1.8 million views, the TikTok fashionistas explains that the clothing brand uses codes to help people work out their dress size.

The now-viral video starts: ‘Girls did you know this Zara hack?’ and goes on to explain the meaning behind the circle, square and triangles that are often seen on clothing. 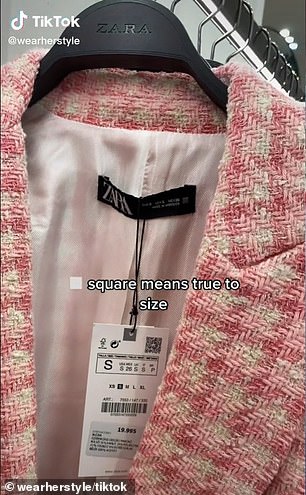 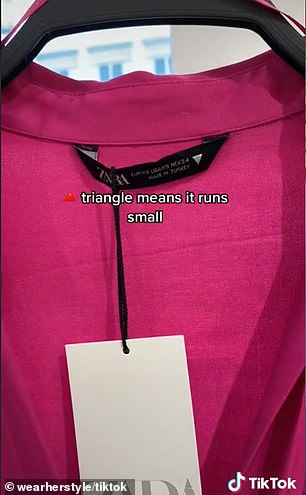 One style account may have cracked the secret behind Spanish-manufactured Zara’s sizing, sharing a video which claims that the clothing brand has a code on its labels which is the key to helping people work their dress size 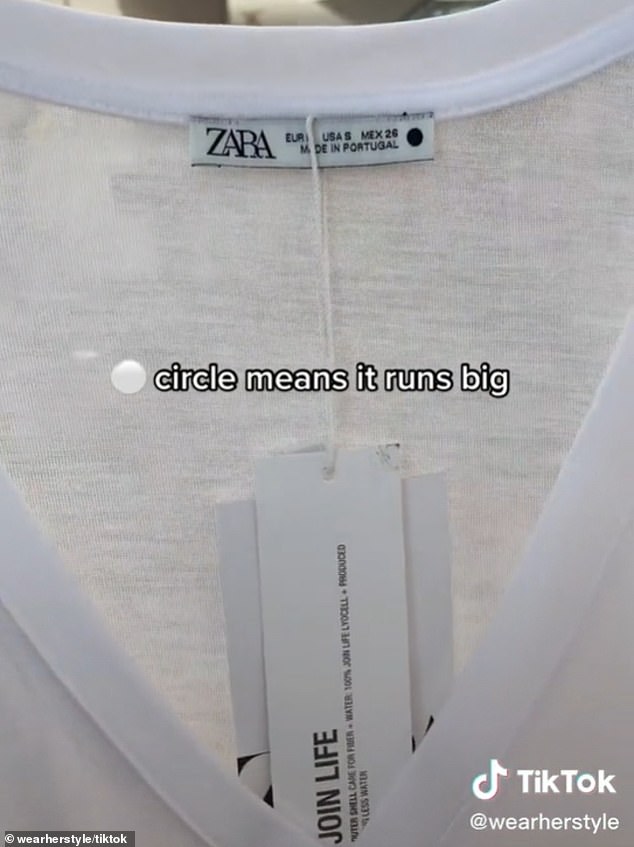 Meanwhile, a circle symbol supposedly means that the clothing runs big. The video has racked up more than 75,000 likes and 1.8 million views on TikTok

A triangle means that the item ‘runs small’ while a circle means that it ‘runs big’. A square indicates that it runs true to the sizing on it.

Many people were amazed by the idea of a secret code, with many reacting positively to the video. One person wrote: ‘Such a useful hack, thanks for sharing’.

A second added: ‘Interesting… didn’t know about this’ while a third added: ‘the cashier at Zara was nice to explain that to me after a return.’

And another penned: ‘Saving this’ while a separate individual commented: ‘Omg, this is so helpful.’

People were amazed by the hack, with many reacting positively and one person writing: ‘Such a useful hack, thanks for sharing’

Others were more cynical about the hack, with many former Zara employees giving their own opinion on the symbols.

One person wrote: ‘not true!! worked in Zara for 6yrs’ while a different commenter penned: ‘I actually asked someone who works at Zara and she was laughing. They are for the employees that help them placing the items correctly in the shop.’

Others agreed, reacting: ‘Not true at all. I have asked in a couple of their stores and the signs have to do with the various collections.’

Others were more sceptical about the hack, with former Zara employees giving their own opinion on the symbols

But Glamour concluded that while the circle is supposedly for the main women’s collection, the triangle for TRF and the square for basics, there may be some truth in using the symbols for sizing.

The TRF collection usually comes up smaller in the store’s clothing range and an employee said: ‘I work at Zara and while the symbols are used to differentiate the three different collections, I’ve noticed that the sizing works like this too!’