Working up to 14-hour days in his job as deputy head of props for Opera Australia, Stephen Adamson has for years been bothered by a hidden problem. Underpants.

Too tight, and they would become uncomfortable in such an active job but – even worse – if they were too loose there was the ever-present possibility of awkward moments. 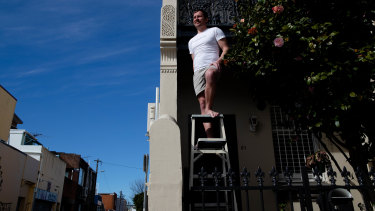 “During set-ups and rehearsals I would wear shorts and when I was up ladders if I ever asked my colleague below to pass something to me, they’d cop an absolute eyeful,” he says. “I started to feel bad for them even though I was much more comfortable in the old faithful, but revealing, boxers.”

Something had to be done, so Adamson decided to get creative. The brief: a pair of jocks that could be worn comfortably all shift without falling out with anyone.

“I looked to see if there was another product out there but there wasn’t anything that was Australian-made that was also organic cotton etcetera,” he said. “So I started making my own. They looked like Dolly Parton’s coat of many colours, but they did everything I asked of them.”

Then, when the first pandemic lockdown struck last year and with time on his hands, Adamson decided to take the plunge and turn his personal undie-cover operation into a smalls business.

He was daunted by the financial risk he was taking, especially at such an uncertain time for the industry. But he was also petrified at having to step into the limelight personally.

“I have trained for years to be in the background and not be out there,” he said. “But it cost me a fortune to get up and running, so I had to model the underwear because I couldn’t afford to pay for a model.

“The day I pressed ‘send’ and started putting pictures of me in my underwear online I had to learn to be comfortable being uncomfortable.”

But his fears were unfounded. The Sydney-made underpants, dubbed Undicloth, have been a huge success, with more than 550 pairs sold so far.

“I was overwhelmed by the people in the arts who supported me when I started even though none of them were working,” he said. “They all reached out and bought a pair. There are quite a lot of opera singers and a lot of mechanists wearing Undicloth now.”

And for Adamson (who has long been in a committed relationship), there has been another unexpected win from stepping out from behind the scenes.

“I was shocked by how many eggplant emojis kept appearing online,” he said. “I didn’t even think about that.”