An explosion in spending could make federal budget deficits even larger than feared, the federal government has been warned as new analysis shows the amount of revenue flowing into Canberra is on track with its own pre-virus forecasts.

Finance Minister Simon Birmingham said on Friday there was no scope to take on future structural spending initiatives but the mid-year fiscal update suggests planned tax cuts – and any further tax relief – will add to the budget’s long-term pressures. 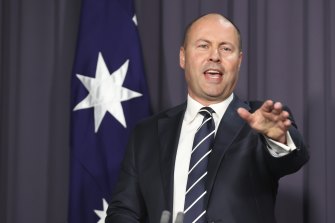 Despite a $106 billion surge in revenue, Treasurer Josh Frydenberg is forecasting cumulative deficits of $340.1 billion over the forward estimates, just $2.3 billion better than had been forecast. This year’s deficit is expected to be $99.2 billion.

Spending as a share of GDP is expected to edge down to 28.7 per cent this year after reaching a post-war record of 31.6 per cent in 2020-21. By 2024-25, spending is still forecast to be at 26.5 per cent of GDP, even higher than the level reached during the depths of the global financial crisis.

Macroeconomics Advisory chief economist and former Treasury official Stephen Anthony said a huge amount of spending was being baked into the budget that would cause enormous problems for taxpayers as the economy and interest rates, normalised.

“It’s a jagged little pill that we’re all going to have absorb,” he said.

“If we follow the normal relationship between growth and interest rates, then we’re looking at disaster into the 2030s and the 2040s.”

In the 2019-20 mid-year budget update, which was released ahead of that summer’s devastating bushfires and the advent of COVID-19, Mr Frydenberg forecast that total spending in 2021-22 would reach $530.9 billion. Instead, it is on track for $631.4 billion.

The largest increase among major areas has been social security and welfare. Instead of spending almost $181 billion this year, the government now expects to spend $226 billion.

Health spending is forecast to be almost 23 per cent higher at $105.7 billion. The next largest increase is the government’s interest bill which has ballooned by 20 per cent to almost $18 billion.

While spending is up, revenue has not collapsed as the government initially feared, staying remarkably close to its 2019-20 mid-year update forecasts.

While tax collections from working Australians is expected to be down by almost $18 billion, they are still tipped to reach a record $239 billion this year.

Tax collections are expected to increase by $267.4 billion by 2024-25 when the government’s third tranche of personal tax cuts are legislated to start. Those cuts will cost about $17 billion a year in foregone revenue in a year when the budget is forecast to show a deficit of $57.5 billion.

Longer term analysis of the tax collections by the Parliamentary Budget Office has already suggested those tax cuts will need to be supplemented by further cuts later in the decade as more people are pushed into higher tax brackets.

The stage three tax cuts are estimated to add almost $200 billion to net government debt. But by the end of the decade, average tax rates on middle income earners are tipped to be back where they were in 1999.

Senator Birmingham said budget repair would be driven by getting the economy to grow as fast as possible which would reduce debt as a share of GDP.

“With huge spending pressures in the NDIS, in delivering aged care services and meeting our national security requirements, we absolutely have to prioritise spending into the future,” he said

“And there’s certainly not scope for federal governments of the future to take on huge additional structural spending activities.”

Shadow treasurer Jim Chalmers said the Coalition was setting itself up to cut spending after the election without telling voters of its plans.

“If the Morrison government intends to cut the budget after the election, they should come clean on what those cuts will be before the election,” he said.

“We have a trillion dollars in debt in this budget and deficits as far as the eye can see, and we don’t have anywhere near enough to show for all of that debt and all of those deficits because the government has wasted and rorted so much public money.”