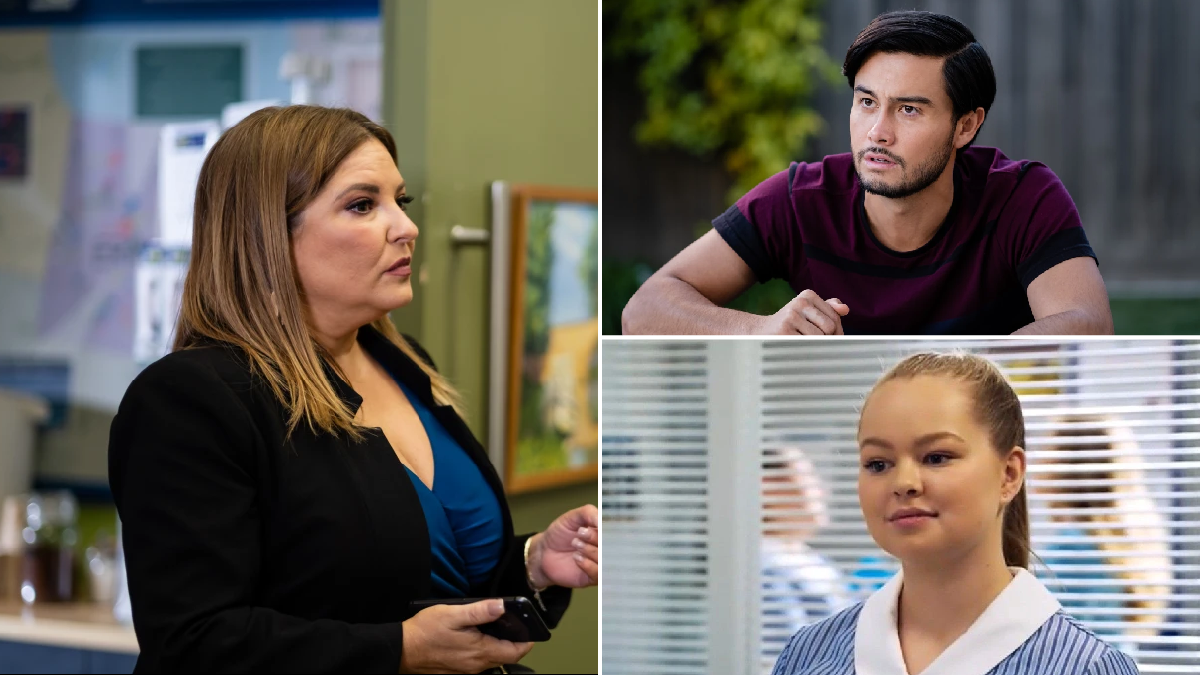 Ah who wants a nice cosy, relaxed, family-filled Christmas when you can have death, destruction, and Sheila Canning going off on one in Neighbours?

It’s set to be a bleak festive period for a few, one being Terese (Rebekah Elmaloglou) – she is facing a lonely Christmas while she goes through her split from Paul (Stefan Dennis) and simultaneously battles alcoholism. But as if that wasn’t bad enough, things take a dire turn when her drinking wins out and she finds herself clinging to life by her fingernails. Will Terese die in a Christmas tragedy?

Harlow (Jemma Donovan) is not in for a great one either – she is seemingly not in the mood for a cosy Christmas after what Roxy (Zima Anderson) discovers about her. After becoming suspicious of her pal, she follows Harlow on a mystery trip where Roxy learns the reason behind Harlow’s recent personality change. She’s meeting someone dangerous – are they turning Harlow evil?

Ned (Ben Hall) and Levi (Richie Morris) are definitely on the naughty list this year as they cannot for the life of them play nice with Amy (Jacinta Stapleton). They are in a battle to win the girl, but who will be triumphant and who’ll be left with a lump of coal?

Kyle’s (Chris Milligan) health comes into question when he decides to start planning his wedding, only for sticky beak Sheila (Colette Mann) to get herself involved. Her interference causes poorly Kyle’s stress levels to rise. Could she inadvertently be the death of her grandson?

And tensions rise for the parenting trio as they try to decide where to spend their Christmas.

Here’s what’s ahead in Neighbours

Ned and Levi go to war

It’s been no secret for a while that the polyamory isn’t working for the trio with both lads wanting Amy for themselves. At the Police ball, Levi and Ned get into a bidding war over their girlfriend, which catches the attention of Levi’s colleague Reuben. Reuben turns out to be a piece of work when he makes a crude insinuation at Amy, and the two lads are quick to protect their girl. Unfortunately, their hot tempers get them kicked out of the ball, leaving them fuming at each other. Levi suffers the consequences at work which leaves him preoccupied enough not to notice Ned make his power move to win over Amy.

Tensions in the Tanaka house

There’s not much festive cheer for the Tanakas. The parenting trio can’t agree on where to spend Christmas- should it be Adelaide, Sydney or Erinsborough? The three butt heads and can’t seem to get anywhere near a solution, so David decides to fall on his sword in working on something that

suits them all. Christmas day then kicks off and the festivities get a boost when Leo suddenly shows up with Britney. All is hunky dory and cosy, until they get some distressing news.

Harlow is harbouring a secret that is about get discovered and will explain why she’s been behaving so strangely for weeks. Her acting out of character has raised more than a few eyebrows and caused a great deal of concern to her nearest and dearest, particularly Mackenzie, who is hurt that she’s losing her best friend. Roxy decides to get involved and does a little PI work, following Harlow on her secretive trip. Roxy makes a startling discovery – Harlow has been visiting her killer dad in prison. This is very bad news indeed. Is Harlow being brainwashed by him? Is she becoming just like her dad?

Can Paul save his marriage?

Terese is teetering on the edge in more ways than one. Her alcoholism is back with a vengeance, with her fight for sobriety quickly becoming a losing battle. It’s made all the worse when she allows herself a dance with Paul at the Police Ball and it’s a stark reminder of what she’s missing. A struggling Terese hits the bottle and is soon discovered off her face by Glen. Later, Paul asks Terese if she’ll consider marriage counselling and Terese surprises everyone by saying yes. Glen is not happy about this arrangement. What’s he going to do about it?

Kyle wants Roxy to have the time of her life at the Police Ball but the after-effects of his chemo have other ideas – his dinner makes a reappearance on the dance floor. He is horrified, feeling like he’s disgraced himself and ruined Roxy’s night all in one. Roxy gently reassures him, nothing is ruined at all, and they have the rest of their lives to have better nights. Kyle decides to reward her for her loyalty by planning the wedding while she’s busy back at work. Sheila is concerned when she sees how hard he is working, worrying his body isn’t strong enough after the chemo to cope with the stress. She forces herself into the planning and takes over, thinking that she’s being totally helpful. Instead, she’s making everything worse as Kyle’s stress levels rise. Will her intended good deed make him sicker?

The first counselling session arrives and Terese does not hold back on Paul. The session has such a devastating effect on her that she is left in ruins and lies to the family about where she’ll spend Christmas – opting to spend it alone, or rather, with a bottle. Christmas in the Tanaka house is a little frosty, but when they all stop bickering for five minutes they realise the truth of Terese’s lies. Alarm bells ring and they rush to find Terese. But while they scramble to get to her, Terese finds herself in dire straits when she falls from a roof. Will they get to her in time?