Fears of a rapidly escalating coronavirus outbreak in Papua New Guinea potentially threatening Australia have led to crisis talks between the two prime ministers over what can be done to protect both countries.

Mr Morrison left a joint Coalition party room meeting early on Tuesday to deal with the issue, after fears a COVID-19 outbreak in PNG could spread to the Australian mainland. 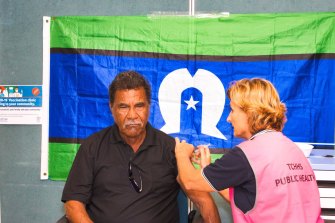 The AstraZeneca vaccine was fast-tracked to islands in the Torres Strait last week as fears of an outbreak from Papua New Guinea grow.Credit:Facebook

Professor Kelly said there had been “several meetings in the past 24 hours” about the situation and the Commonwealth would make further announcements “soon”.

A federal government spokesman said Mr Morrison had spoken with PNG’s Prime Minister James Marape on Tuesday afternoon “about the ongoing situation and what more Australia can do to support the PNG Government and also protect both countries”.

The government on Tuesday announced a small team of specialist doctors would be sent to PNG within days to help with the outbreak after the country reached out to the Morrison government for help.

A larger contingent of health workers was expected to bolster efforts in coming weeks.

Australians have continued to travel to PNG for work throughout the pandemic, including a number of workers at the OK Tedi copper mine who have tested positive for the virus.

Charter flights from the mine into Cairns were suspended earlier this month after a surge of positive cases returned into Queensland.

Queensland Health has been helping the country analyse its coronavirus tests for months. Of the most recent 500 swabs taken from PNG residents, 250 of those came back positive.

The AstraZeneca vaccine was fast-tracked to islands in the Torres Strait last week amid fears residents from PNG’s Western Province may breach border restrictions and travel south to Queensland.

Vaccinations began on Saibai in the Torres Strait on Monday, an island just four kilometres from PNG’s mainland.

Ms Palaszczuk said she has had “a very good conversation” with Mr Morrison after she planned to discuss what more the Commonwealth could do to block flights full of COVID-19 positive patients arriving in the state, as well as stepping up aid to the Pacific nation.

“Over 50 per cent of our 37 active cases in Queensland at the moment are from Papua New Guinea, that is our concern,” she said.

“It is right on our doorstep and it is a real risk.”

Mr Marape has warned the country’s health system would not be able to cope with the “staggering” number of cases.

“It’s broken loose … we need to contain it,” he told a press conference on Monday.

“The number is quite staggering, if we don’t do a corrective response to this, our health system will be clogged and we won’t be able to sustain it.”

There have been 2269 confirmed cases and 26 deaths, but testing rates have been relatively low.

There are concerns of an explosion of cases after mass gatherings were held at the weekend to commemorate Sir Michael Somare, PNG’s first prime minister after independence from Australia in 1975, who died last month.