Smell like royalty! Stephanie of Monaco launches new Princess of Hearts perfume inspired by her ‘generous soul’ with some of the proceeds going to her HIV charity – but it will cost you £279

Princess Stephanie of Monaco has released a luxury perfume costing £279, with some of the proceeds going to a charity close to her heart.

Prince Albert’s sister, 56, has worked with perfumer Laurent Mazzone to create Princess of Hearts, a  ‘refined rose elixir’ that will set you back nearly £300.

According to the perfumer’s website, the scent has a ‘generous soul’ in homage to the ‘extraordinary’ woman who inspired it.

The proceeds from the first 800 bottles sold will go to Fight Aids Monaco, a charity founded by Stephanie in 2004. 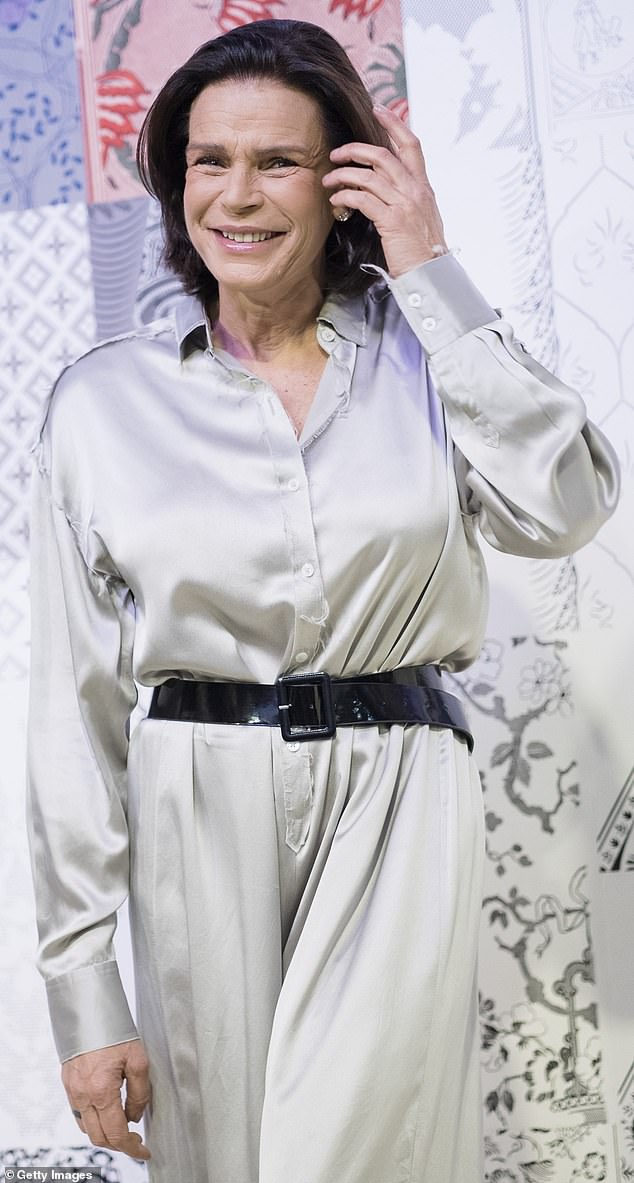 Princess Stephanie of Monaco, 56, has released a perfume in collaboration with perfumer Laurent Mazzone, costing £279 (without VAT). Pictured as part of the Paris Fashion Week Womenswear Fall/Winter 2020/2021 in February 2020

The Imparfum website claims that the perfume is just not ‘any ordinary perfume’ and holds a ‘much deeper meaning.’

‘It symbolises the will of H.R.H Princess Stephanie and Laurent Mazzone to bring a real contribution to the fight against HIV,’ it went on.

The perfumer described the scent as a ‘refined elixir’ that should be worn like a necklace.

Princess of hearts, pictured, is a charity endeavour that will see the proceeds of the first 800 bottles go to charity

The scent comes in a sleek rectangular bottle in gold and black and reads ‘Princesse de Coeur, extrait de parfum’ – ‘Princess of Hearts, extract of perfume.’

It is available via Imparfum, who ship worldwide, as well as authorised resellers.

Stephanie’s latest venture comes at a time where the Monaco royals have rallied around Prince Albert, 63, in the absence of his wife Princess Charlene, 43.

The mother of Prince Jacques and Princess Gabriella, seven, has been admitted to a ‘treatment facility’ where she will remain for ‘at least several’ weeks after it became ‘evident she was unwell’ within hours of her return to Monaco following 10 months in South Africa. 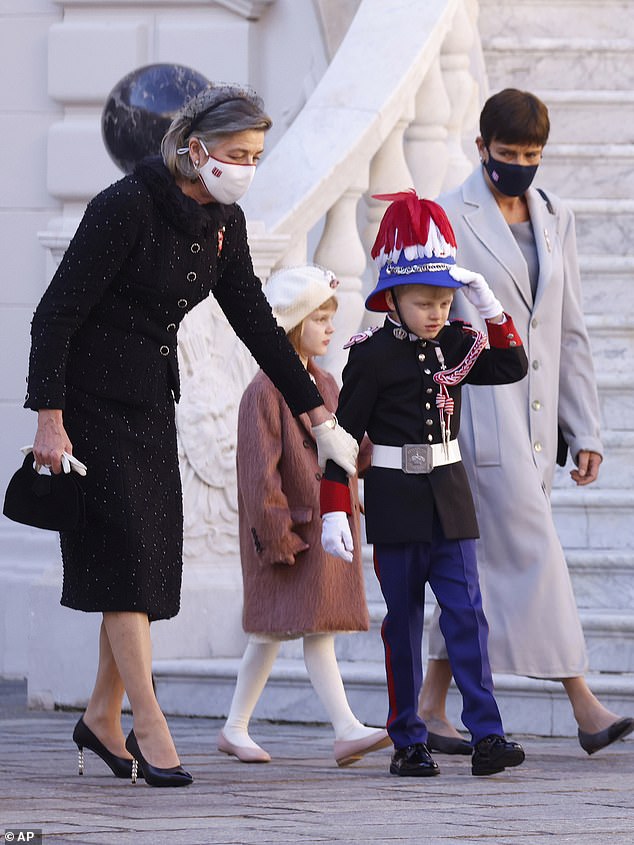 Family members including Princess Caroline of Hanover (left) and Princess Stephanie (right, pictured on Monaco Day) are helping to care for Princess Gabriella and Prince Jacques 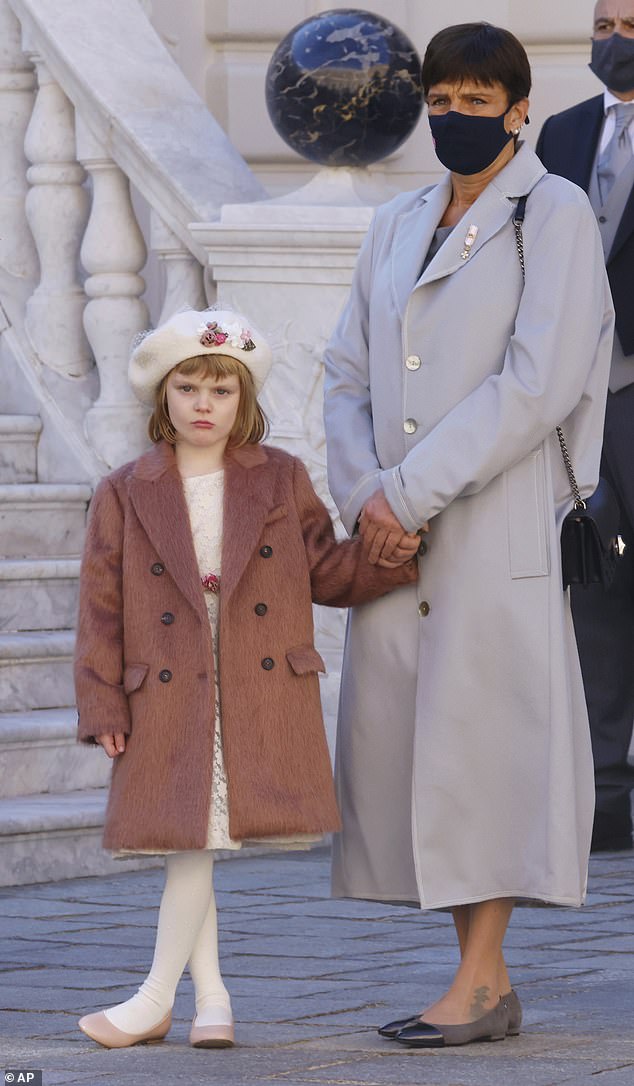 Gabriella was spotted holding her aunt Princess Stephanie’s hand on Monaco Day, amid her father’s claims ‘a loving family environment’ means the twins get enough affection 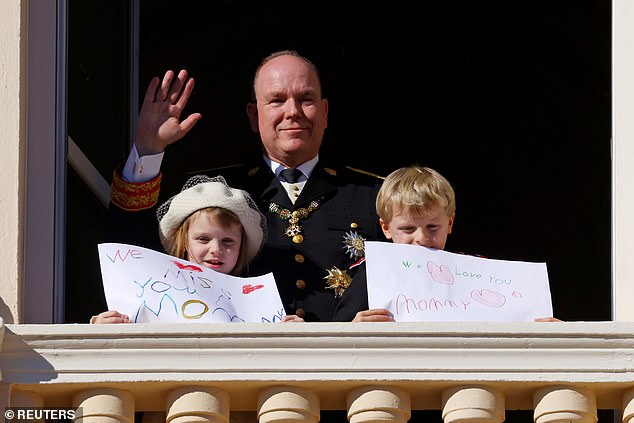 Albert, who earlier this year said his wife was suffering from a sinus infection, did not reveal details of her illness at the time, but ruled out cancer and Covid. He hinted at mental health struggles, saying she ‘was overwhelmed and couldn’t face official duties, life in general or even family life’ and is suffering from ‘exhaustion, both emotional and physical’.

Discussing the impact their mother’s absence has had on the children, the Monaco royal spoke to French news outlet Monaco Matin and admitted that they had ‘suffered’, but that that they had ‘a family environment that made sure they weren’t lacking in affection’.

But it seems like they’re being well-looked after by Prince Albert’s sisters Princess Caroline of Hanover, 63, and Princess Stephanie, who were seen holding their hands during celebrations for Monaco National Day on Friday.

Princess Stephanie, who looked chic in a smart grey coat, walked closely alongside Gabriella before clutching the youngster’s hands firmly in front of hers.

During the big event, Prince Albert stood on the balcony of Monaco Palace with his children, who held signs that said: ‘We miss you Mommy’.

Speaking to Monaco Matin, Prince Albert said: ‘I cannot tell you more out of discretion. There is tiredness, not just physical, which can only be treated with a period of rest and monitoring.’

He continued: ‘For me, it’s pretty simple – my priority is my family. This is an extremely important time in [the children’s] life – the way they grow up helps them see the world.

‘And if one of the parents is away for medical reasons, the other parent has to be there.

‘I have heard too many friends and acquaintances telling me that they wish they had been there for their children, at a certain age, taken up by their work or their professional life. I don’t want to have these regrets.’

Speaking to People magazine, Prince Albert said his 43-year-old wife is suffering profound ‘exhaustion, both emotional and physical’ and will require clinical care lasting several weeks at a minimum following her return from a 10-month stay in South Africa.

The palace confirmed that Charlene would be recovering for the foreseeable future, releasing a statement on Tuesday that said: ‘The Princess is currently convalescing and will continue to do so for the coming weeks, allowing Her time to recover from a state of profound general fatigue.’

The statement said the couple have ‘both decided that a period of calm and rest is necessary to ensure the very best recovery for Princess Charlene’s health.’

It continued: ‘In order to protect the comfort and privacy essential to Her recovery, the Princess’ location will remain strictly confidential.

‘As soon as her health permits, the Princess looks forward to once again carrying out her Princely duties and spending time with the Monegasques.’

The family were all spotted together in South Africa at the start of June, and official photos of the family shared on social media in August showing another visit had taken place after three months apart.

The royal couple have faced rumours about the state of their marriage for many years, but the prince stressed in the interview this week that the separation is not due to relationship issues.

He said: ‘I’m probably going to say this several times, but this has nothing to do with our relationship.

‘I want to make that very clear.

‘These are not problems within our relationship; not with the relationship between a husband and wife. It’s of a different nature.’

He also said her absence is not due to cancer, Covid, or plastic surgery.

However, the couple’s reunion photos were met with scepticism, with body language Judi James telling FEMAIL that Charlene was using exaggerated gestures of closeness with Albert and appeared ‘needy’ in the images – while Prince Albert did ‘not reflect’ his wife’s body language.

She added that in the family image, the princess was  ‘clinging’ to her husband, saying: ‘Charlene’s announcement rituals here suggest she wants to send out a very emphatic message that she is now back with her family and that her love for her husband is stronger than ever.

‘Just as in South Africa when Prince Albert came to visit, Charlene performs what look rather like over-kill signals to make her message clear to the rest of the world, putting in much more effort than her husband to look excitedly re-united and joyous.’

The reunion was also met with scepticism by the French media, with respected French celebrity outlet Gala publishing an article with the headline: ‘Reunion of Albert and Charlene of Monaco: but where exactly do they sleep?’

And Voici – another popular magazine read widely across Monaco and France – ran with: ‘Charlene of Monaco back: the Princess breaks the silence and forgets to mention her husband’.

This was a reference to Charlene using a social media video to thank everybody who had helped her through months of ill-health, without name-checking Albert at all.

The video was shared by her foundation on Twitter as she returned to Monaco.

In it, she said: ‘It has been, obviously, a very challenging time to be here but at the same time it has been wonderful being back in South Africa.

‘I’d like to thank the doctors in South Africa who have done a fantastic job of helping me and I’m so looking forward to getting back to my children.

‘Thank you South Africa, and thank you everyone and god bless you.’

Speculation over the relationship dates back to the couple’s 2011 wedding, where Charlene was snapped crying.

The former Olympic swimmer even reportedly tried to flee Monaco for her native South Africa on three separate occasions before the royal wedding.

This was after she discovered Albert had fathered a love child while they were together. 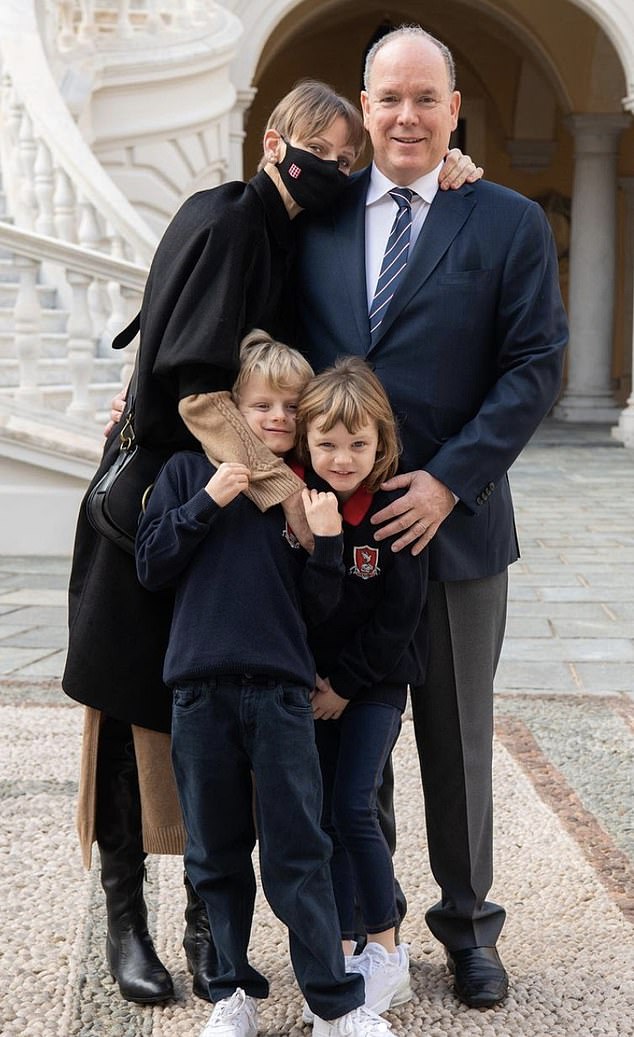 Princess Charlene was reunited with her family on November 8, with images from a staged photo call shared on the palace’s official Instagram page 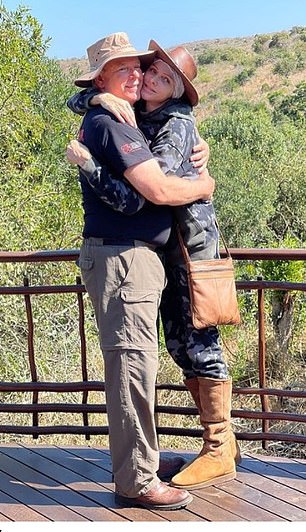 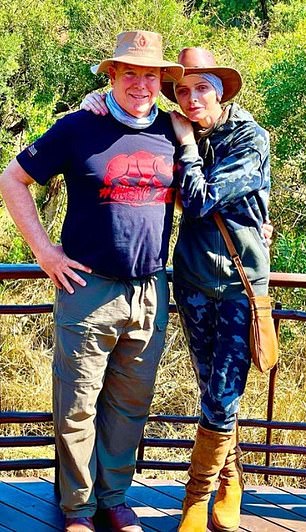 In 2014, Nicole told the Mail On Sunday: ‘The truth is that, I’m sorry to say, Albert hasn’t seen Alexandre since a brief visit last September.

‘It has become impossible since he married that girl.

‘I suppose as a new wife, how would one feel? But she should think about my innocent child.

‘I don’t want to attack her but I think it is just jealousy and I don’t know why.

‘I have been through hell in my fight for my son’s name and future.’

Additionally, while Prince Albert is already supporting two illegitimate children he fathered, he is alleged to have been in a relationship with a Brazilian woman which resulted in a daughter in 2005.

The claim, which his lawyers dismissed as a ‘hoax’, is particularly painful as he was dating Charlene at the time, having met in 2000.

However, Charlene has continued to publicly support her husband.

The former swimmer, who represented the country at the 2000 Sydney Olympics, spoke out on their relationship in January.

She told Point de Vue: ‘When my husband has problems, he tells me about it.

‘I often tell him, “No matter what, no matter what, I’m a thousand percent behind you. I’ll stand by you whatever you do, in good times or in bad”.’

The mother-of-two went on to say she also often tells her husband she will ‘protect him’ and will ‘always be by his side.’