Not so long ago, if you wanted to watch sports on television in Australia you had two options: free-to-air for the stuff on the anti-siphoning list – AFL, NRL, the Olympics, the Ashes, the Australian Open and so on – and Foxtel for the rest. Now, the picture is a lot more complicated and becoming more so by the day.

Put simply, the market for sports broadcasting rights has exploded. More sports are being covered and more tournaments are deemed worthy of screening, and they’re cropping up in more places than ever before – free-to-air channels, secondary channels, pay TV channels, streaming services, direct-to-consumer apps and even YouTube – catering to smaller niche audiences.

Sports coverage is evolving from broadcasting to something a little like narrowcasting. And as a result, keeping your eye on the ball has never been quite so exhausting. 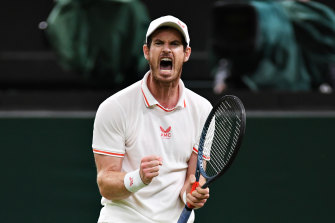 Andy Murray at Wimbledon this week.Credit:Getty

This week Stan (owned by Nine, which also owns this masthead) announced it had secured the rights to European soccer’s most glamorous club tournament, the UEFA Champions League, as well as its dowdier sibling, the Europa League, for the next three years. These tournaments had previously been on Optus Sport, a platform dedicated entirely to soccer coverage (and one that has revolutionised that coverage with its excellent array of highlights packages, ranging from three minutes to nine-minute extended highlights to 25-minute mini-matches, 45-minute mega-matches and the good-old-fashioned 90-minute full game coverage – an innovation Stan would do well to retain).

Optus Sport still has the English Premier League, arguably the jewel in the crown of soccer coverage, and the ongoing international tournament, Euro 2020. But die-hard fans of the world game would have to spend a small fortune to stay abreast of all the major leagues and tournaments given the fragmentation of rights deals.

Stan’s coup came a fortnight after Ten’s American owner ViacomCBS announced it had landed the rights to the bulk of Australian soccer content: the A-League (one game each Saturday night on Ten, the rest on Paramount+), the W-League (one game each Sunday afternoon on Bold), the FFA Cup (final on Ten) and Matildas and Socceroos games (World Cup qualifiers on free to air). But if Australia actually makes the World Cup finals in Qatar in 2022, you’ll be watching them on SBS, for free, thanks to the anti-siphoning regulations that grant free-to-air channel first screening rights for certain sports. 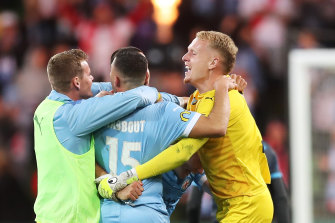 Confused yet? We haven’t even touched on the European leagues – La Liga (Spain), Ligue 1 (France), Bundesliga (Germany) and Serie A (Italy) – with their small but passionate local fan bases (you’ll find all of them on BeIn Sports, which you can get via Foxtel, Kayo or Fetch). Meanwhile, ESPN (also available via Foxtel, Kay and Fetch) carries the FA Cup final.

To watch all this soccer you would need to spend a minimum of $20 for Stan (basic $10 subscription, plus $10 for sport), $25 for Kayo, $15 for Optus Sport (included or cheaper on Optus plans) and $9 for Paramount+. That’s $69 a month for what has traditionally been deemed a less valuable tier 2 sport in this country.

But the old hierarchy of sports is rapidly breaking down thanks to the interest shown by the streamers and direct-to-consumer carriers.

“Second-tier sports find a venue in streaming because they break out of the traditionally limited schedules of television,” says Tom Evens, professor of media at Ghent University in Belgium and author of The Political Economy of Television Sports Rights.

“These rights are relatively cheap to pick up, give some credibility to the platform, and allow it to lure specialised [audience] segments you cannot draw with football, for example. So a golden era for niche sports may be arriving in the sense they are guaranteed exposure, get paid for it, and are available in the digital space, which is vital for popularity among younger segments of the population.”

But it’s not just the youngsters the streamers are chasing via sports. According to a May report by UK-based Ampere Analysis, the streamers are nearing saturation point in terms of younger subscribers/viewers, and so need to focus their efforts on recruiting older customers. And in doing so, “sports rights are going to be an important part of any conversion strategy”.

When Evens published his book in 2013, he estimated the global value of sports broadcasting at $US30 billion. The most recent estimate has it at $US45 billion. But much of that growth has come from an expansion of sports rights for sale, and of buyers, rather than of the prices paid.

A separate Ampere report from February this year noted “rights values will suffer downward pressure across the key European markets for the next cycle of tenders” as the economic uncertainty spurred by the pandemic continues to resonate. That scenario is playing out in Australia too. At the same time as new players have entered the market, the value put on rights by free-to-air and cable has dropped.

Ten paid $200 million to secure the rights to Australian soccer for the next five years. That compares with the $57.7 million-a-year deal Foxtel signed with Football Federation Australia in 2016. The AFL, meanwhile, was forced to agree to a discount of around $54 million a year on the $415 million per season deal that was due to expire at the end of 2022.

‘A golden era for niche sports may be arriving.’

Those haircuts were forced by the COVID disruptions last year (the failure of codes to supply the promised product triggered renegotiation clauses in their contracts with broadcasters) but they also reflect the fact that audiences for most codes are in decline, or are migrating to different platforms, such as BVOD.

Fragmentation is giving rise to some very strange situations, such as the fact YouTube is on standby to stream Australia’s forthcoming Test series from the West Indies if no one picks up the rights. Or that a small unheralded streaming player called SportsFlick could win the rights to Champions League soccer with a $60 million bid over three years, only to then lose them when it was unable to secure finance to pay for the deal. Stan’s winning bid was reportedly worth closer to $12 million a year.

Even at that price, it’s hard to know if the numbers add up. In announcing its soccer deal to the share market, Nine estimated it would spend $70-$90 million on sports rights this financial year. It claimed to have put on 150,000 subscribers to its sports service, which would equate to $18 million a year assuming every one of them stayed the full 12 months.

One industry observer, who was not authorised to speak on the record, can’t see the sense in some of the recent deals. “Many of these sports actually migrated away from free-to-air some time ago,” the source said. “They are very small sports that have always had small TV audiences and will not grow when they are buried into an SVOD service.” 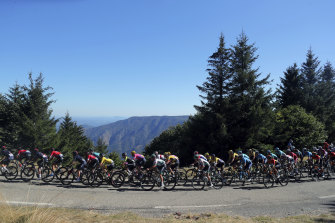 With its mix of thrills, spills and scenery, the Tour de France is great television fodder for SBS.Credit:AP

But there’s always more than one way to skin a ball, and maybe the real action is happening behind the play.

Netflix’s official line is that it is happy to make sports documentaries but has no interest in live events, but Amazon Prime Video recently made its first foray into live sport in Australia with the Olympic swimming trials. And according to Tyler Bern, Amazon’s LA-based head of content for Australia and New Zealand, it’s unlikely to be the last.

With their long narrative arcs (over a season or a meet), their heroes and villains, and their inherent dramatic peaks and troughs, sports drive both acquisition of new customers and retention of existing ones. And for a company such as Amazon, with its massively deep pockets, there is little demand that a sport pay its way. In fact, the greatest value to Amazon of the swimming may have been its limited timeframe, giving potential customers a reason to sign up now rather than delay.

For the traditional broadcasters, though, a more conventional return on investment is essential. 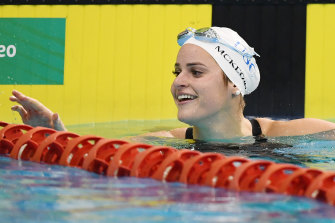 Kaylee McKeown’s record-breaking antics at last month’s Olympic swimming trials were a boost for Australia’s chances in Japan – and for Amazon Prime Video.Credit:Getty

On its own, a streaming deal might not make great sense for a Nine or a Ten. But as part of a package deal that encompasses streaming, BVOD, free-to-air and online, it does.

“Every broadcast partnership we enter into needs to make commercial sense for Nine and fit with our broader strategy,” says Nine chief executive Mike Sneesby. “Nine is best positioned to maximise the value and exposure for the sporting codes who partner with us, and we continue to demonstrate that we are comfortable to walk away from bidding wars where expectations become unrealistic.”

ViacomCBS Australia chief operating officer Jarrod Villani also pointed to the “broad reach and exposure the sport, teams and players will receive, along with the wealth of programming opportunities, across all our platforms” when announcing Ten’s foray into soccer.

Time will tell whether the flurry of new deals really do make sense for the sports, the broadcasters or both. The fans, meanwhile, just want to know where they can watch it, and how much it’s going to cost.

Follow the ball … who’s got what, and how much does it cost

Rugby League: Nine/9Now (free), Fox (packages from $75 p/m), Kayo ($25 p/m) – Nine, owned by the owner of this masthead along with Stan, shows three NRL games per week, plus the finals series and State of Origin and Kangaroos games. Fox League simulcasts those games, and all other NRL matches except the grand final, which it has on delay, as with State of Origin.

Australian Rules: Seven, Fox – Seven has three to four games per round live, in both men’s and women’s football competitions. Fox has them all.

Cycling: SBS, Seven, GCN+ ($12.99 p/m) – SBS has long been the home of cycling in this country, with the Tour de France the jewel in its crown. Seven has the local Tour Down Under and the Cadel Evans Road Race. If you’re wheely obsessed though you will want the dedicated GCN+ streaming service, which has more tours than you can poke an empty water bottle at.

Motorsport: Ten, Seven, Fox – If F1 is your bag, Fox has comprehensive live coverage, while Ten has the Australian race plus highlights from others. MotoGP is on both too, while the Supercars championship is on Seven and Fox. The Bathurst 12-hour race is on 7 and 7Mate.

Cricket: Seven, Fox/Kayo – Test cricket in Australia is on Seven and Fox/Kayo, and overseas games are mostly on the latter, except the Ashes tour of England in 2023, which will be on Nine. One dayers and Twenty20 are on Fox/Kayo. As of time of writing, YouTube was reportedly on standby to stream the Test series from the West Indies that starts on July 10.

Tennis: Nine/Stan, ESPN (via Fox/Kayo or Fetch, from $14.99 p/m) – Three of the four grand slam tournaments are on Nine/Stan, with only the US Open not available (that’s on ESPN, which also has a bunch of ATP Tour tournaments). Nine also has Australia’s Davis Cup matches.