A teenager who used a Facebook DIY sperm donor at 18 insists she has no regrets – as she plans to have more children this way.

Annie Barter from Halstead, Essex, who is mother to 10-month-old Anela, was obsessed with becoming a parent from the age of 16 and refused to wait around for Mr Right.

Instead the eager student took matters into her own hands and joined a Facebook group dedicated to matching women with a willing sperm donor.

It was there, in January 2017, that she started talking to the biological father of her little girl – a ‘blonde, lean, thirty something university graduate from London, who looked a bit like a thin Thor’.

The pair soon met in a hotel room in the capital, where he handed over his sample while Annie then used a DIY insertion kit.

Now 19, Annie, who is believed to be the youngest woman ever to get pregnant using a sperm donor, says she is planning to have more children using this method. 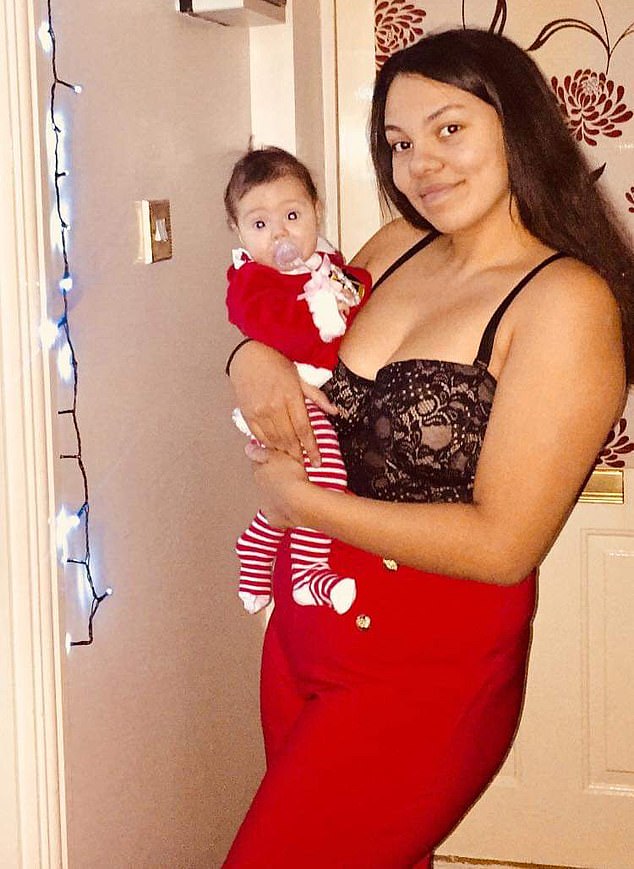 Annie Barter from Halstead, Essex, who is mother to 10-month-old Anela (pictured together), was obsessed with becoming a parent from the age of 16 and refused to wait around for Mr Right – instead using a sperm donor

She said: ‘Having Anela using a Facebook donor was simple and easy. It’s given me the control I need over my family. In the next 12 to 18 months, I hope to find another donor using the Facebook groups I am members of.

‘I may eventually meet and fall in love with a man, but until then I want to ensure my family grows the way I want.’

The part-time barista added: ‘Having a baby this way makes me independent. I don’t have to deal with the threat of a possible failing marriage or relationship, and I know I can rely on myself to properly parent.

‘I am setting the rules for my family structure, and being a single mother – even at my age – is inspiring.’

Since sharing her story with others, Annie said she’s been inundated with hundreds of messages from girls her own age wanting to do the same thing. 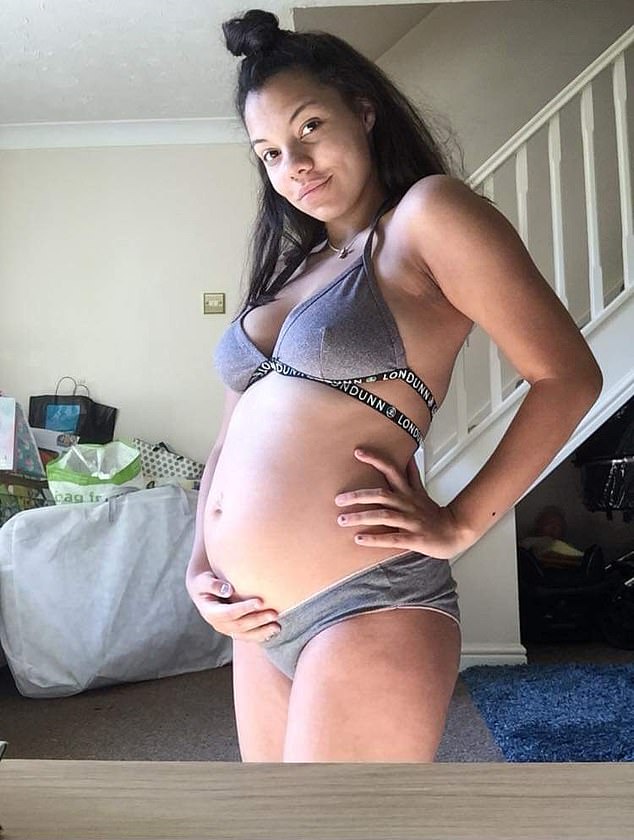 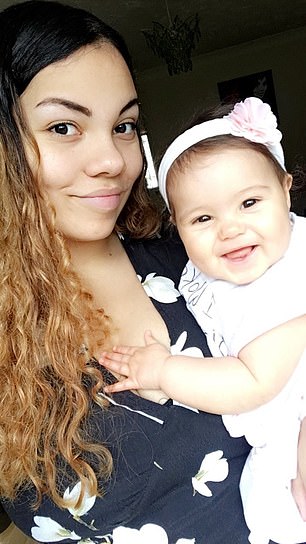 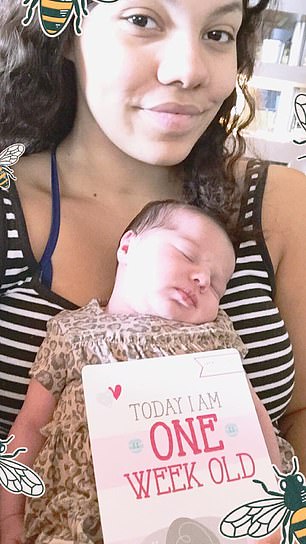 In January 2017, Annie started talking to the biological father of her little girl (pictured with her mother left, now, and right when she was one week old)

‘When people learn I am an independent parent who used a donor they want to know more. I have struck a chord,’ she said.

‘So many girls my age come from broken families, they have seen their parents divorce and been victims of child battles. They don’t want that for their kids.

‘Being a proper solo parent like I am is something many other girls my age want to do, and I am overwhelmed with the support I have gotten.’

Annie, who said she was inspired by seeing other people have children at a young age – including friends as well as celebrities such as Kylie Jenner (who gave birth to her daughter when she was 20), insisted she’s not just a ‘silly teen’.

‘I am not a silly teen. I am a mature independent woman and mum,’ she said. ‘While I realise some people will be shocked an 18-year-old used a sperm donor people should realise it’s my choice and I am a great mum. 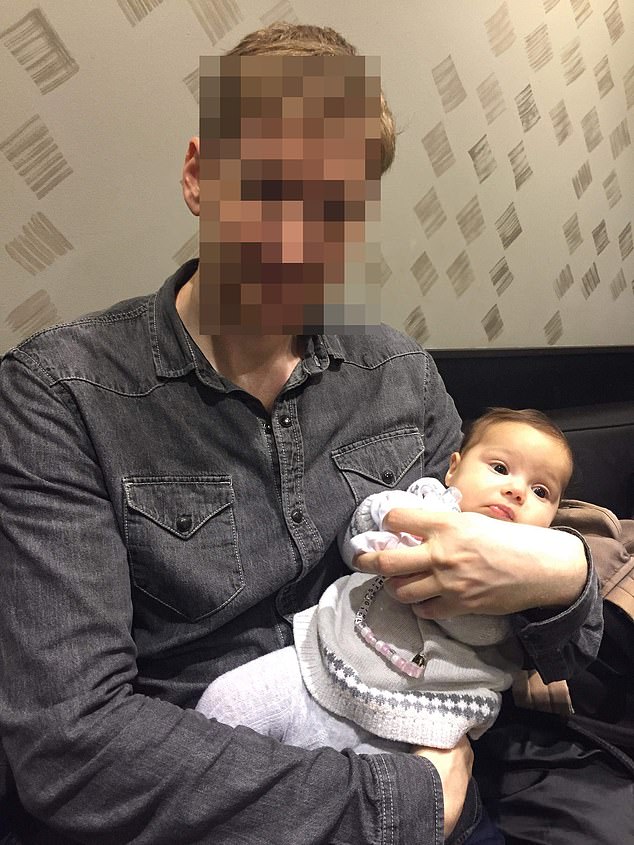 Annie’s sperm donor met Anela shortly after her birth, but will not help bring the little one up 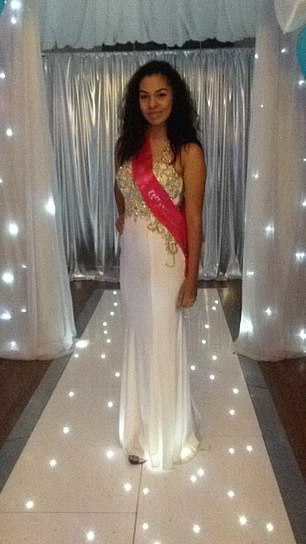 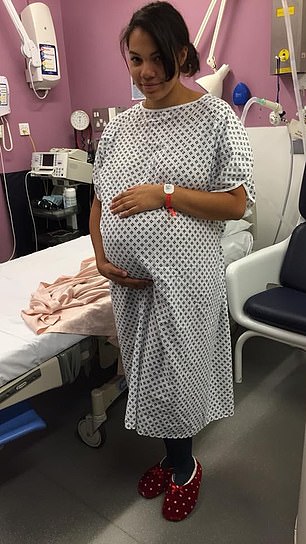 ‘People may think it’s ridiculous to use a Facebook sperm donor and a DIY artificial insemination kit at just 18 but I have no regrets. I am proud of my decision.’

Annie, who plans to be a mid-wife in the future, said she had always wanted to be a mother ever since she was little and started to think seriously about having a baby when she was 16.

‘I didn’t rush into this decision. I started researching it,’ she explained. ‘I spent two years looking into sperm donors on the NHS, via private clinics and using Facebook and other social media forums.

‘I was too young to be approved as a sperm donor recipient on the NHS. Private sperm donors via a clinic was too expensive. So I turned to social media.

‘There are hundreds of sperm donor pages on Facebook. I signed up to ones that had the most members and offer artificial insemination as a method of falling pregnant and also had risk lists.’ 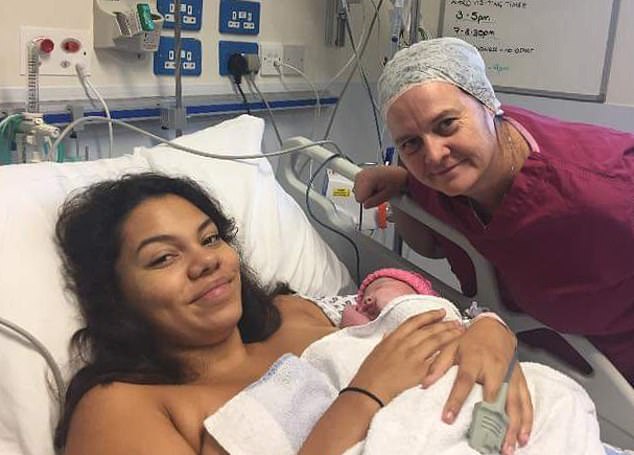 Annie remained at college until August 2018, and daughter Anela was born via C-section on August 21, weighing 7lbs 10oz. The pair pictured shortly after the birth 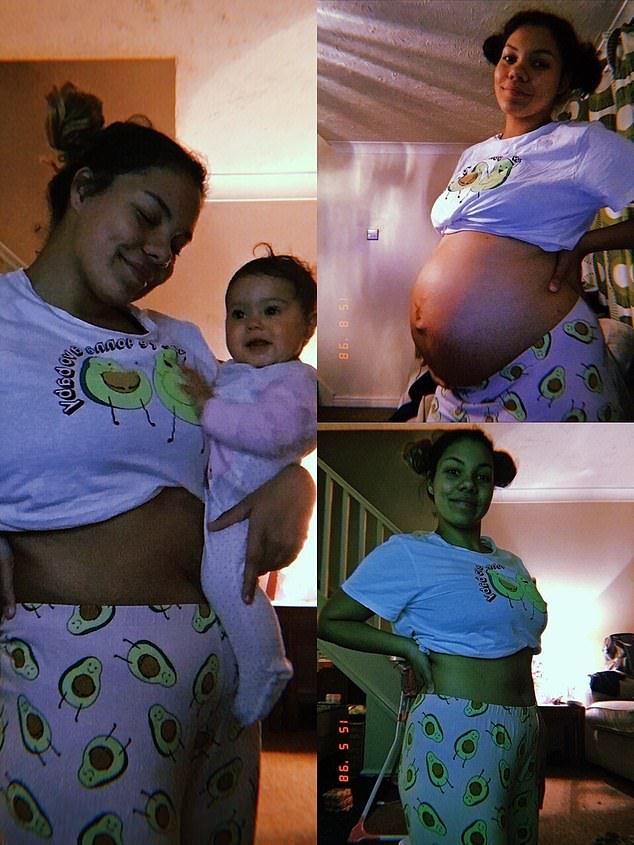 These would be lists of donors that other members suggested to avoid.

Not wanting to be intimate with any sperm donor, Annie decided to use an insemination kit – a syringe which would inject the man’s sample instead.

Annie said: ‘I’d started messaging a number of donors I had met on the pages. Some had fathered dozens of children. Some were very clinical and cold.’

Soon she discovered her chosen man, Tom*, and peppered him with questions on how it all worked, why he did it, and what his background was.

‘He always answered my messages politely,’ she recalled. ‘He’d successfully fathered one girl and three boys.

‘He also made it clear he only wanted to father five children to keep the number of sperm donor offspring limited. 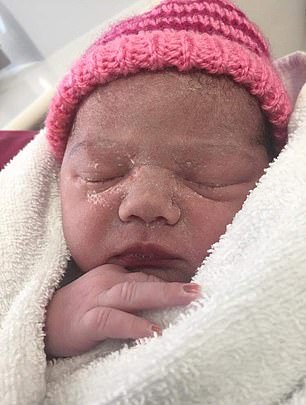 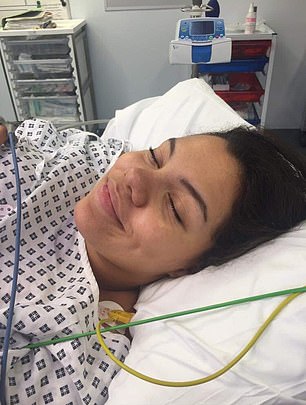 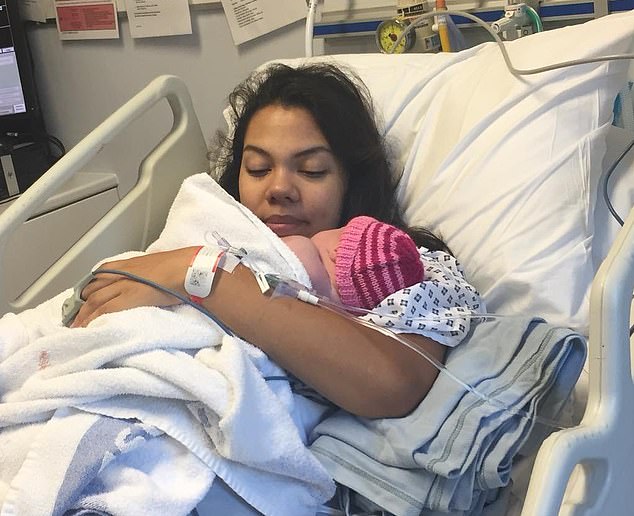 What is the law on sperm donation?

Sperm donors should normally be aged between 18 and 41-years-old.

A donor does not have any legal rights and responsibilities for children born from the donation, provided they donate through a licensed UK fertility clinic.

They will have no say over their upbringing and won’t be required to pay anything towards their care.

However, if the donation is not done at clinic licensed by the HFEA, it is possible that they could be considered the legal father of any children conceived from a donation.

If a donation results in the birth of a child or children, the donor can apply for information only on the number of children born, their gender, their year of birth.

If a donor donated after April 1 2005, a child born from the donation can find out certain details about them.

If they are aged 16, details they can be told include a physical description, where you were born, ethnicity, and marital status.

If they are aged 18, they can get the donors full name, date and town of birth, and a recent address.

However, a child born by private donor may be denied the chance to find their biological father.

‘He didn’t want to be involved in their upbringing. He did it because he wanted to help women or couples have children.’

During this period, Annie also tried to date and met 19-year-old Peter* on Tinder, who she saw casually for around four weeks.

She explained: ‘It was always casual and by mid-August we’d stopped meeting up.’

One day in September, Annie started feeling unwell and noticed bleeding. She was later told by her GP that she’d had a miscarriage.

‘The miscarriage made me realise just how desperately I wanted a baby,’ Annie said and she quickly messaged Tom to say she wanted to go ahead with their plan in December 2017.

‘I honestly didn’t think the first try would work,’ Annie admitted. ‘But a couple of weeks and six tests later my pregnancy was confirmed.’ 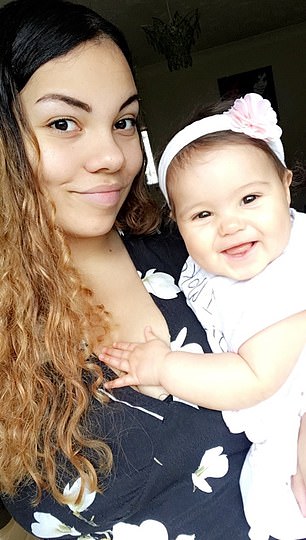 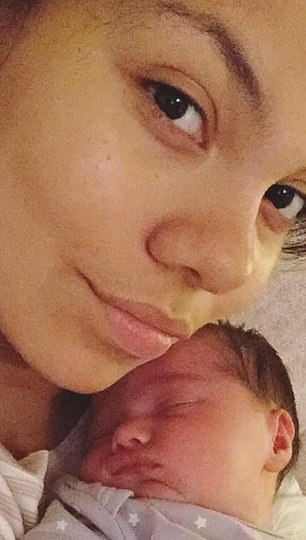 Annie takes a selfie with her daughter shortly after her birth, pictured right, and again once the little one is older, left 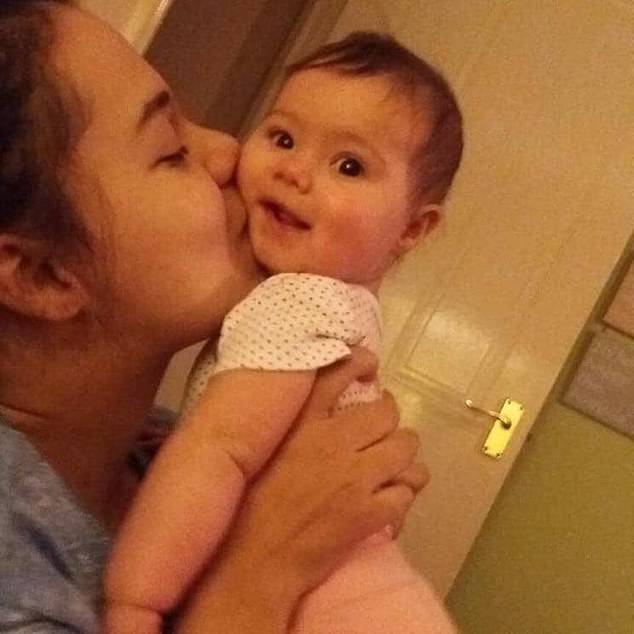 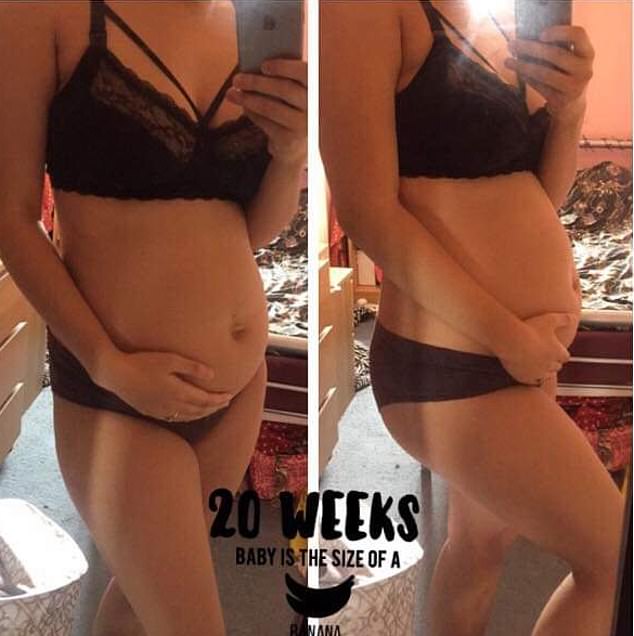 Annie pictured at 20 weeks pregnant. The teenager has revealed she would have more children via sperm donor

‘Suddenly all the pain of the miscarriage disappeared and I focused on becoming a mum. I messaged the donor a picture of the tests and he told me congratulations.

‘We didn’t sign any documents or legal paperwork, all he asked is he not be named on the birth certificate.’

Making arrangements for sperm donation outside a clinic is not illegal, but the donor can’t be paid, although they may receive expenses.

But Annie’s journey didn’t come without some hiccups as her single mother, Sally Barter, 53, a care home worker tried her best to talk her daughter out of her decision.

Yet her mother eventually realised there was no changing Anna’s mind and has been a rock for her ever since – agreeing to look after the little one while the teenager continues her studies.

Annie made an announcement on Facebook that she was expecting when she was three months pregnant. 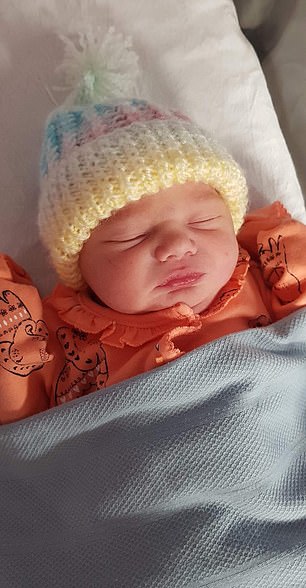 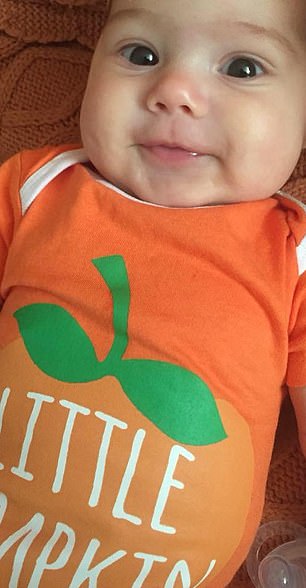 Anela shortly after she was born on August 21, weighing 7lbs 10oz, left, and right, now 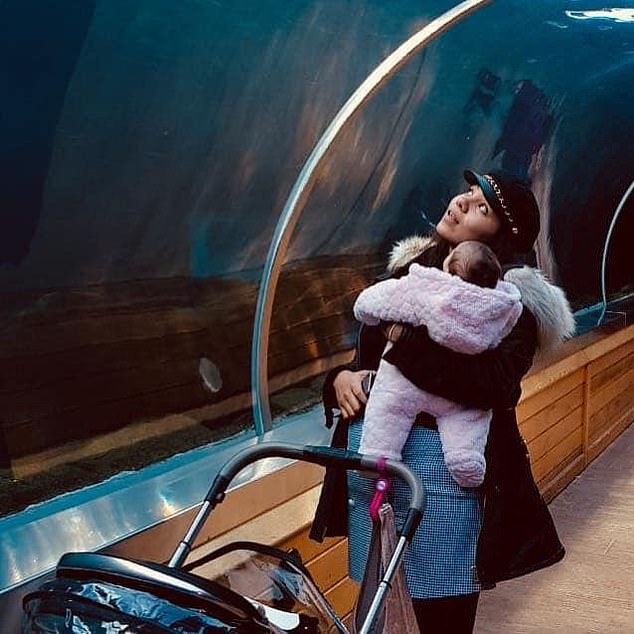 Annie and her daughter during an adorable visit to an aquarium, with the pair wrapped up warm in chic coats

‘Many of my relatives were shocked to learn I’d used a Facebook donor,’ she confessed. ‘They told me I was silly, stupid, risking my career and didn’t know what I was doing.’

Anne remained at college until August 2018, and daughter Anela was born via C-section on August 21, weighing 7lbs 10oz.

‘As soon as I held her I knew I’d made the right decision. Everyone loves her and she is the centre of my world.

‘The first couple of months I stayed at mums. Then I applied to government support to get my own one bedroom flat. I’d saved money but needed help and every other mum in the UK is entitled to the same help.

‘I didn’t fall pregnant to get government aid and I am going to pay my way. I am returning o part-time work in two months as a barista. In September I will start my mid-wife course.’

*Names have been changed.