I cradle the world in my hand – the universe of English, the Arabic cosmos, the whole Mandarin. Not just one, but two Norways. The steppes of Russia, the Balkan jigsaw, the raised alveolar non-sonorant trills of Czech.

Egg-shaped, the world is wrapped in foil, weighs 20g, and contains cocoa butter, sugar and emulsifier. Inside, nestled in a plastic capsule, sleeps a baby jeep, once you assemble its pieces, plus a translucent slip that Keith Kahn-Harris dubs “the Manuscript”. 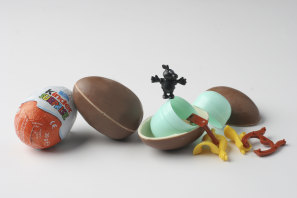 I cradle the world in my hand – inside a plastic capsule, within chocolate, under foil.Credit:Getty

The slip is 90 by 40mm, both sides crammed with 37 versions of “the Message”. In English, the words resound: “WARNING, read and keep: Toy not suitable for children under 3 years. Small parts might be swallowed or inhaled.”

In my case, that toy is a baby jeep, a mini-vehicle parked within my own Kinder Surprise. Unsupervised, a kid might nibble its axle or wolf a camshaft, foreshortening a young life, not a lawsuit the Ferrero company was prepared to swallow. Hence, their warning – from Albanian (with its dual systems of Gheg and Tosk) to Ukrainian – bundled into every chocolate egg.

A sociologist by training, Kahn-Harris pondered the polyglot warning, and started to daydream. How did Ferrero select these 37 languages? How did the languages differ in nuances, in alphabets? Where was Welsh? Maltese? Which other tongues missed the cut? Such queries inspired his sweet hymn to global translation, The Babel Message.

Alive with language, the book covers more territory than could any toy car. It also flips the Babel myth, claiming how multiple languages promise a wealth of ideas and perspectives rather than the Bible’s forecast chaos. If reduced to monoglots, the author argues, earthlings would succumb to “a tyranny of dullness”.

Welsh and Maltese dipped out, we learn, as they hail from nations monstered by English, a caveat in point. As a relative youngster, Norwegian owns two modes – Bokmal and Nynorsk – to reflect its growing pains. (Bokmal, usually with a cute krouzek or circle over its “a”, is Danish-adapted, while Nynorsk fuses the nation’s dialects.)

Then there’s Armenian, under threat by Azerbaijani, whose “confectionery” (their word) is a filigreed “n” away from being “fireworks”. Meantime, Moldovan can’t seem to settle on the simplicity of “swallow”, preferring the equivalent phrase of “reaching the digestive or respiratory organs”.

Why? And why do some cultures prefer capital letters, or “warning” over “message”, or cite three years instead of no age limit, or urge for the slip to be kept or not kept? “Language is never just language,” as Kahn-Harris writes. “It is wrapped up in religious, ethnic, national and individual identities.” Inside a plastic capsule, within chocolate, under foil.

More fun lurks beyond the Manuscript, as Kahn-Harris seeks to “liberate the Message”, commissioning translators across the planet to offer their own versions. Soon we learn Swahili lacks an equivalent of toy, British Sign Language is facial as much as gestural, while Jamaican creole favours “ina dem noz” for want of inhale.

Sadly, Australia’s indigenous languages remain a glimmer in the book. However, the Message gets a makeover into Sumerian, an ancient text accustomed to laws, plus Dothraki, David Peterson’s conlang (constructed language) from Game of Thrones.

Vitally, Kahn-Harris never loses sight of his implicit privilege as an English speaker, so often any exercise’s target language. Nor does he compromise his humour, rendering the warning into NSM (Natural Semantic Metalanguage), a bare-boned version of any language that spurns idiom and excess frills. The NSM English declares it like it is: “Children can eat hard object and be killed”.

To read more from Spectrum, visit our page here.