Imagine having to get married just to be able to travel to your own wedding.

That’s the bizarre situation Alicia Tucker and Simon van Oordt have found themselves in, after the government refused eight times to grant Mr van Oordt a travel exemption to enter Australia. 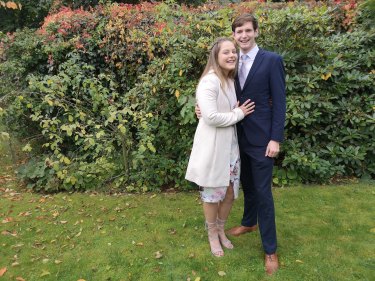 Sydney woman Alicia Tucker, 22, and her Dutch fiance Simon Van Oordt, 25, have been unable to get a travel exemption for Simon to come to Australia so they can get married.

Their problem? While the Australian Border Force hasn’t provided reasons for the refusals, they believe it’s because they can’t adequately prove they are a couple as their Christian beliefs mean they won’t move out of home together before marrying.

“It’s nearly like our relationship doesn’t exist, because we can’t prove that we live completely together and that we share bills together, that sort of thing, which is quite hard,” Ms Tucker said.

“Our relationship is real. We are planning on getting married. Just because we decided on not living together and not starting our family together until we’re married because of our religious beliefs, it’s a bit hard to think then in their eyes it isn’t good enough.”

Ms Tucker, 22, is from Sydney and her family has been friends with the van Oordts, from the Netherlands, for 50 years.

She and Mr van Oordt, now 25, first met five years ago when he came to Australia with cousins. He then invited her to a Christian summer camp in the Netherlands and they started dating in July 2018, crossing oceans to visit each other in the years since.

They’ve both been in Amersfoort in the Netherlands for the past 10 months, living with Mr van Oordt’s parents.

He proposed in March and they have set a wedding date at Ms Tucker’s family church in Sydney in December.

Their original plan was to return to Sydney in February so Ms Tucker could do her final year of study with the Australian Catholic University on campus, after spending nearly half her degree studying remotely. 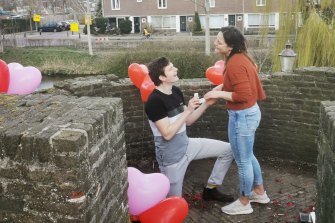 Simon Van Oordt proposed to Alicia Tucker in March in the Netherlands.

But she doesn’t want to leave without Mr van Oordt, her “rock” who has helped her through hard times including struggles with mental health.

“I have to go back to Australia because I need to finish my degree, but … I can’t leave him. If we were apart that would impact on [my mental health] even worse,” Ms Tucker said.

But after having travel exemptions repeatedly rejected, both on compassionate grounds and as an immediate family member, they have made the “super difficult decision” to marry with a civil ceremony in the Netherlands in mid-July in a last-ditch effort to prove their relationship is real.

They describe the travel exemption process as dehumanising and an emotional rollercoaster, especially when they only ever receive automated replies.

Mr van Oordt said it was particularly frustrating to get no indication of what was wrong with their applications.

“The thing I don’t understand is, if they spend time going through your case, why they can’t include two sentences on why you actually got rejected, so you can actually update your exemption,” he said.

Border Force data on travel exemption requests made between August 2020 and March 2021 show only one in 12 compassionate grounds applications were approved.

Border Force commissioner Michael Outram told a Senate estimates hearing that decisions to grant or refuse travel exemptions were based on well-publicised criteria and guidance and that the organisation often helped eligible applicants to satisfy the requirements.

“It is not a decision the ABF takes lightly, and we are always mindful of the specific circumstances of every applicant,” he said. “But we cannot waiver from the government’s intention of protecting the health of the Australian community.”

Labor MP Julian Hill has raised the issue in Parliament on a number of occasions, highlighting the inconsistencies when the government grants people partner or prospective marriage visas but won’t allow those partners to come into Australia during the pandemic.

“These are genuine relationships, often of years and years, and yet there are thousands of people who are separated from their partners because they’re not married,” he said.

Stay across the most crucial developments related to the pandemic with the Coronavirus Update. Sign up to receive the weekly newsletter.