Another rain-bearing weather system is likely to hit an already-sodden eastern Australia next week, bringing with it the chance of more flooding. 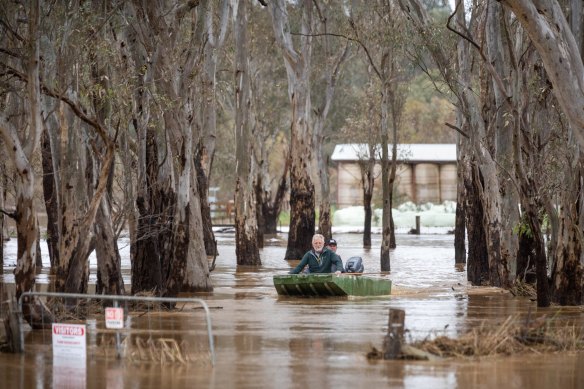 “At this stage, it’s not looking as heavy as this week’s rain has been,” Domensino said. “But – without wanting to cause any alarm – the landscape will be very sensitive to any more rain in the next week because of the amount of water that has fallen over the past two days.”

The slow-moving band of cloud that brought heavy rain and extensive flooding to Victoria this week has moved over the Tasman Sea. Some parts of the state received more than 200 millimetres – close to a season’s worth of rain – in just 48 hours.

Early indications are that northern Victoria might see another 20 to 50 millimetres of rain midweek, while Tasmania could receive 30 to 40 millimetres. The heaviest rain is likely to be in NSW.

“If we do see another 50 millimetres out of next week’s weather system, that would be most likely to cause renewed river rises,” Domensino said. 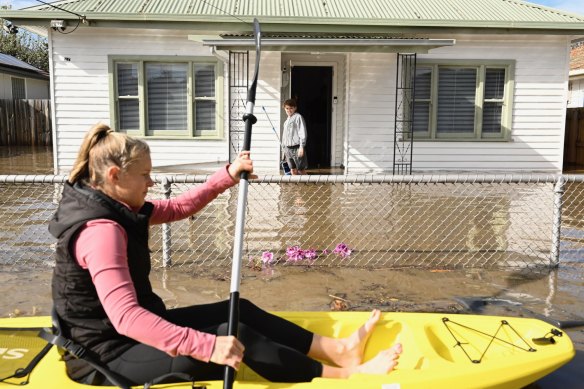 Carolyn Bohm pulled out the kayak in Maribyrnong. Credit:Chris Hopkins

On Thursday afternoon, Emergency Management Commissioner Andrew Crisp said the flooding would not be a one-off event.

“While we do focus on the 24-48 hours, it is important for Victorians to be reminded that this will not be the only event,” he said.

“There’s every chance we will have another low-pressure system, another weather event later next week.

“Let’s learn from this and if you aren’t as prepared as you think you should be, look at how you can do that for future events … in the next six to eight weeks.”

A series of oceanic and atmospheric phenomena are affecting rainfall over the Australian continent.

The La Nina climate driver over the Pacific Ocean, which brings wet weather to Australia, is now in a rare third year in a row.

The Indian Ocean Dipole, meanwhile, is in its negative phase, which increases the chance of above average spring rainfall for most of the eastern two thirds of Australia.

“Water storages are absolutely full. Our catchments are absolutely saturated,” he said. “So every time we see reasonable rainfall totals, unfortunately we’re going to see some communities back under flood warnings again.”

There are two other, lesser-known climate drivers also at work. In the region between Tasmania and Antarctica, strong westerly winds blow almost continuously and are associated with storms that move from west to east, bringing rainfall to southern Australia.

The Southern Annular Mode, or SAM, refers to how far north and south these westerly winds move. SAM is in a positive phase and likely to remain this way into early summer, bringing an increased chance of rainfall, though this varies by region.

The lesser-known Madden-Julian Oscillation, or MJO, is also active. This eastern-moving “pulse” of wind and cloud circles the tropical areas of the globe and, when active, increases our chances of above-average rainfall.

“What we saw over past few days is a perfect example of the type of weather we have when all of these climate drivers are active at the same time,” Domensino said.

Readers are advised to stay across emergency services information in their area, download the VIC Emergency app and monitor the SES website.

There are 50 points across the state where people can get sandbags.

Get to the heart of what’s happening with climate change and the environment. Our fortnightly Environment newsletter brings you the news, the issues and the solutions. Sign up here.