It’s OK to admit it.

However much we might like to pretend otherwise, somewhere – deep down inside ourselves – what we all really want is to turn into a tiny little blob and navigate a pink, fluffy obstacle course.

It’s a dream the game Fall Guys has made a reality for millions around the world. But even though it looks like it’s aimed at toddlers, Lead Level Designer Megan Ralph says that’s not stopped some fully-fledged adults throwing their toys out of the pram.

“The hate messages we’ve been sent have been… interesting,” she laughs, as Radio 1 Newsbeat catches up with her ahead of the release of the game’s second season. 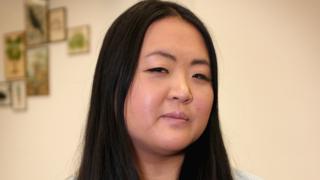 After a summer many of us spent cowering behind things on Call of Duty, shaking with fear and praying we wouldn’t be spotted – you could argue Fall Guys was exactly what the gaming world needed.

Through a series of Total Wipeout style mini-games, 60 blob-creatures are whittled down to an eventual winner. It’s stupid, it’s incredibly easy to pick up and it’s ridiculously fun.

With tens of millions of downloads in just over a month, it’s also been unbelievably popular – but, as any gaming developer will tell you, the more popular a game gets, the more people like to be good at it.

“Most of the messages I get are too rude to repeat here, but it’s fair to say the team games are the main source of hate for most people,” Megan smiles.

“Everyone thinks it’s their team’s fault – that the other people on their team are rubbish and that they’re playing brilliantly. When you dig down into it, though, most of the time that’s not the case.”

Unusually for a blockbuster game, Megan says Fall Guys was developed by a “tiny team of about 20 people”.

And this, she says, has thrown up problems as its popularity has sky-rocketed.

“The last few weeks has been pretty intense for the team. We’ve already started improving things that fans have been asking for.”

“We didn’t really expect people to be sitting down playing this game for seven hours a day, but they are. So we’re trying to put some variation in the existing levels.

“It was suggested that we all take a bit more holiday, but because it’s all over social media it’s really hard to separate yourself from it.

“We found that the people that have taken holidays have been playing it on their time off, which is probably a bit unhealthy.”

If the team was stretched before, though – things aren’t about to get any easier.

Determined not to make the game a “flash in the pan”, they’ve already started working on content for its second season, which is expected to launch early in October.

“It’s going to be themed. We’re going to have a different look for different bits, which will hopefully be fun and refreshing.

“It’s going to be entirely different maps and round ideas, too. We want to inject a bit more excitement in the current months.”

There’s one other painful lesson Megan has learnt from the experience: even if you personally design a game, there’s no guarantee you’ll be good at it.

“These days when I jump on I can’t get past the other people. People have so many strategies, it’s just impossible to catch up.

“It’s horribly embarrassing. I made the level Hex-A-Gone, so I know what you’re supposed to do to win it – but when it comes down to it I still freak out.