This long and combative election campaign has done what many predicted when Anthony Albanese seemed to be on course for an easy triumph over Scott Morrison just five weeks ago.

It has closed the gap between the two leaders and their parties. The idea of a thrashing at the election, with Labor on 54 or even 55 per cent, has given way to a close contest where the outcome depends on the final days of hand-to-hand combat. 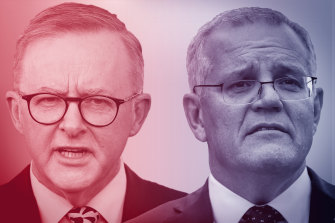 The six week campaign has shown the public a lot of Anthony Albanese and Scott Morrison.Credit:Fairfax

On the numbers in the Resolve Political Monitor, which has a margin of error of 2.2 percentage points, the result this Saturday is too close to call.

The Labor leader has a slight edge over the Prime Minister in two-party terms at a national level but this is an uncertain guide when so much depends on individual seats in very different parts of the country.

And the brutal truth for both leaders is that many voters reject both of them.

Asked which leader and party is best for the country, 31 per cent name Morrison and the Coalition while 29 per cent choose Albanese and Labor.

So 40 per cent are undecided or prefer others. This campaign is simply not galvanising voters to break convincingly for one leader or the other. At least, not yet.

Asked who is best for their households, 31 per cent choose Morrison and the Coalition while 30 per cent prefer Albanese and Labor. Again, about 39 per cent are undecided or prefer others.

Australians in this frame of mind could easily choose the devil they know or shrug their shoulders and let the other guy have a turn.

The danger sign for Labor is that its primary vote has slipped during the election campaign. The Labor primary was 38 per cent in the Resolve Political Monitor in March but fell to 34 per cent in April and has fallen again to 31 per cent in this new survey.

While this looks too low compared to the party’s result at the last election, 33 per cent, it may be a sign of a reluctance in the community to rally to Albanese and his cause. The support for the Greens, with a primary vote of 14 per cent, is unusually high in this survey.

The threat to the Coalition is more significant, however, because its primary vote has slumped from 41 per cent at the last election to 34 per cent in the latest survey. The Coalition remains weak despite the slight rebound over the past two weeks.

The Sydney Morning Herald and The Age launched the Resolve Political Monitor last year with the goal of putting more emphasis on what voters said about their primary vote and policy issues rather than making it all about the two-party calculation – that is, a single number for each side.

While this survey gives Labor a lead by 51 to 49 per cent in two-party terms, it is risky to apply that national figure to states with smaller populations such as Western Australia and Tasmania. Albanese is counting on gaining at least two seats in each of those states.

This survey added 400 responses by telephone to the usual online panel of about 1,600 eligible voters. This ensured the survey reached people who might be less inclined to join the online panels, such as those on higher incomes. The respondents for the online panels were primarily recruited off-line.

This means the survey base is larger than in the standard Resolve Political Monitor and the margin of error is smaller, at plus or minus 2.2 per cent. The inherent uncertainty in political polling means the two-party result for Labor could range from 49 to 53 per cent.

The survey is a snapshot in time rather than a prediction of the outcome this Saturday but it carries warnings for both leaders. Albanese cannot be complacent about his lead. Morrison remains behind despite his rebound.

After almost six weeks, everything will come down to the final days.

Cut through the noise of the federal election campaign with news, views and expert analysis from Jacqueline Maley. Sign up to our Australia Votes 2022 newsletter here.