Australia has been changing even faster than we realised. As voters took a decisive turn to the centre-left in May by electing our most diverse federal parliament in history, yet another momentous threshold was crossed in the real economy. Professional and technical services overtook retail trade to become the second-largest employer after healthcare and social assistance, while construction dropped from third place to fourth.

This detail, confirmed in the rearview of official labour force data released late last month, reaffirms the story of the teal wave of professional women who wiped out the Liberal Party in heartland seats in Sydney, Melbourne and Perth. They acquired political power at precisely the moment when the brain economy they work in overtook the old economies of consumption and property. 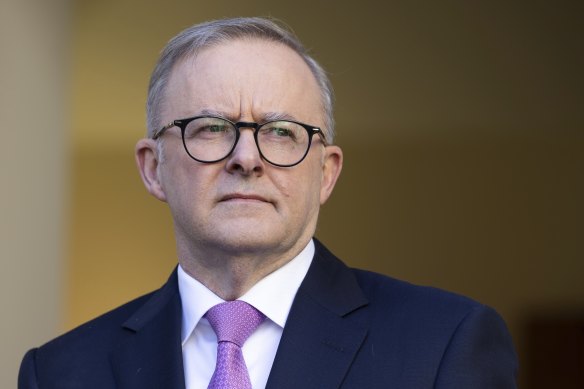 Clarity on the jobs summit has to start right at the top.Credit:Alex Ellinghausen

But it is a story with a deadly twist for Anthony Albanese’s government. The newly ascendant professionals also represent the revenue side of the budget that is bleeding ordinary workers. Welcome to the dilemma of the stage-three tax cuts, which Labor waived through the parliament last year even though they were unaffordable, regressive and biased towards men.

These are the tax cuts that Labor couldn’t afford to oppose before the election, but can’t afford to implement now. The cost to the budget was originally put at $15.7 billion in 2024-25, and $18.3 billion the following financial year, according to an assessment by the Parliamentary Budget Office. The revised cost is expected to be much higher.

But scrapping the tax cuts outright, or delaying their introduction by a year or two, would not return the budget to surplus. Liberal treasurer Josh Frydenberg’s pre-election budget estimated a deficit of $47.1 billion in 2024-25, and $43.1 billion the following financial year. Those numbers now appear to be too optimistic. Although the bottom line is recovering faster than expected in the current financial year and the next thanks to surging commodity prices, bracket creep and the jobs boom, the latest Treasury estimates are expected to show the deficit blowing out again in the very years the tax cuts come into force. 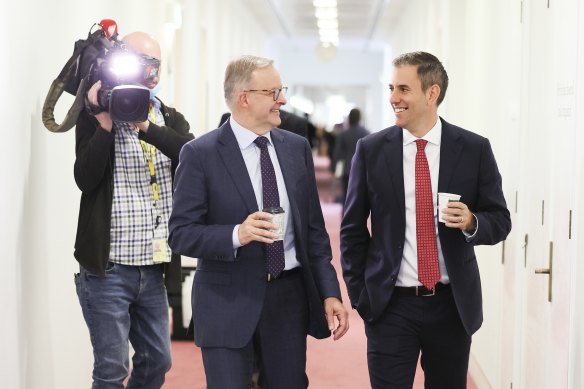 Before the election, Albanese and Jim Chalmers had no choice but to go along with the so-called “stage three” tax cuts.Credit:Alex Ellinghausen

A stimulus of some sort may well be needed in 2024 to prop up demand, especially when households will be into their third year of higher interest rates, and real wage cuts. So scrapping or delaying the tax cuts is, in fact, risky fiscal policy.

It is the second and third strikes against the tax cuts – their skew against middle Australia in general, and women in particular – where the economics and politics are more compelling. No self-respecting Labor government would design the tax scales to deliver 78 per cent of the benefit to the top 20 per cent of earners ($12.2 billion of the $15.7 billion in 2024-25), or split the dollars 67-33 between men and women ($10.5 billion versus $5.1 billion). 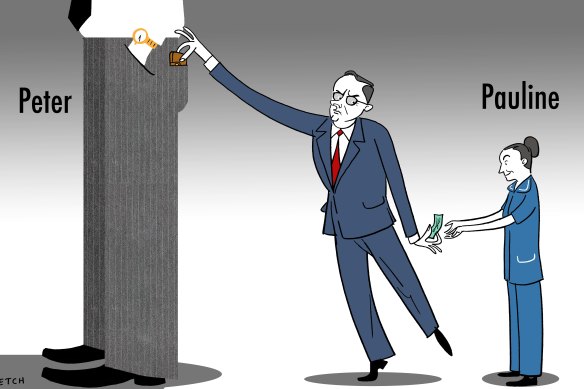 But this is the bargain that Albanese and his shadow cabinet accepted in opposition. They did so at a time of political vulnerability in the winter of 2021 when the Coalition was still favoured to win the election, even though the polls suggested Labor was competitive and that prime minister Scott Morrison’s approval rating was in freefall. Albanese did not want to risk a repeat of the tax-scare campaign that the Coalition deployed so effectively against his predecessor Bill Shorten in 2019.

Nevertheless, the prime minister and treasurer must be asking themselves whether they can afford to stick with the tax cuts in their entirety. The reason they favour men at the very top of the income ladder is they flatten the tax scales from four rates to three. They do this by abolishing the marginal tax rate of 37c that currently applies on every dollar earned between $120,001 and $180,000 a year. A new middle rate of 30c will apply instead from $45,001 to $200,000. That is, someone on half the average full-time income of about $90,000 will pay the same rate of tax as someone on more than double that figure. No self-respecting Labor government should oversee this so-called reform.

The flattening of the scales are a fiscal and equity time bomb. They violate basic Australian values of prudent budgeting, and tax fairness. They reward elites who don’t need a handout. They disenfranchise the workers in the caring economy who have carried the burden of the pandemic, and who will be asked to be on the frontline again to repair the social safety net in child care, disability support and aged care.

Every member of parliament should have read by now the speech Treasury secretary Stephen Kennedy delivered in June which detailed the structural challenges facing the budget. The key piece of data Dr Kennedy revealed was that spending as a share of GDP is “expected to average 26.4 per cent over the decade ahead, compared with 24.8 per cent in the decades prior to the pandemic”.

That is more than $40 billion a year in today’s dollars – in effect, it is the structural deficit Morrison and Frydenberg bequeathed Albanese and Chalmers. But it is spending that Labor views as non-negotiable, on the National Disability and Insurance Scheme, aged care, defence, health and infrastructure.

Dr Kennedy said the government could identify “structural savings” in the budget to offset this spending, or “it can raise additional tax revenue”. What is fascinating about the second part of the equation is the subtle warning he gave about the trajectory of income tax collections. Ordinary workers will face a record tax burden due to bracket creep if this government and the next sit on their collective hands and do nothing to repair the revenue base. Bear in mind that this scenario applies even after taking account of the stage-three tax cuts. It is the true measure of the damage these tax cuts will do to the revenue side of the budget.

A future treasurer will eventually need to compensate lower and middle-income workers for the bracket creep already baked into the tax scales. He or she will probably have to do it by returning to the four-tier system that Labor is committed to abolishing on behalf of a tired and divisive government it defeated at the last election. The best time to do it is before July 1, 2024 – before the stage-three tax cuts break the system.

Labor does not need to abandon the tax cuts altogether; rather it is the windfall for the top of the income ladder that needs to go. Some of the savings could be redirected to lower-income earners, or perhaps used to pay for the overdue wage increase that Albanese has committed for aged care workers.

Key to disarming this time bomb are the teal independents. They can help Labor make the case for robbing Peter to pay Pauline by reducing some of the free money that is coming to the brain economy and using it, instead, to help support the caring economy.

The Opinion newsletter is a weekly wrap of views that will challenge, champion and inform your own. Sign up here.