A little more than a decade since finding their own soulful groove and three year's since their acclaimed debut album, Melbourne band the Teskey Brothers dominated last night's Music Victoria awards.

Held at Melbourne's Recital Centre and just days after four victorious hometown shows at the Forum Theatre, the Teskey Brothers from Warrandyte were big winners at the annual awards, scooping up four trophies plus the $10,000 prize that comes with 2019's album of the year for Run Home Slow. 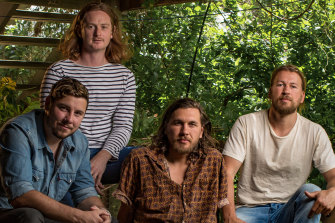 The Teskey Brothers, who are also hot favourites for the ARIA awards later this month, were named Victoria's best band, best regional/outer suburban act and awarded best song for So Caught Up, adding to their 2017 Music Victoria win for best breakthrough act in the wake of debut album Half Mile Harvest.

Other nominees in this year's best album category were Angie McMahon for Salt, Amyl and the Sniffers' self-titled debut album, Gregor for Silver Drop and On Diamond's self-titled album. Amyl and the Sniffers were also nominated next to the Teskey Brothers for best band along with Cash Savage and the Last Drinks, Tropical F–k Storm and King Gizzard and the Lizard Wizard.

"We had a look at the nominees this year and it was an incredible line-up, so to win is such an honour for us," the Teskey Brothers said. "Thanks to everyone at Music Victoria and everyone who voted."

In the 15th year of the awards it was singer-songwriter, drummer and producer G Flip who took out the $5000 Premier's Prize for the best Victorian breakthrough act. It was a category brimming with talent; Gena Rose Bruce, DRMNGNOW (Neil Morris), Gordon Koang and Tones and I, who just cracked 16 weeks atop the ARIA singles chart, were the other nominees. Tones and I took home the outstanding achievement award in a hugely successful year, winning fans both locally and internationally. 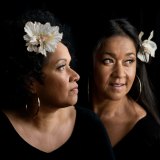 Vika and Linda Bull were popular inductees into Music Victoria’s Hall of Fame.Credit:

Live entertainment on the Recital Centre stage came from Suldusk, who were nominated in the best heavy album category, Grand Salvo and best song nominee Gordon Koang. Music Victoria's 2019 Hall of Fame inductees Vika and Linda Bull closed the evening with a performance of their song When Will You Fall For Me, accompanied by guitarist Mark Seymour, who wrote the song.

Community radio broadcaster PBS FM, which this year celebrates 40 years on the air, was also inducted into the Music Victoria Hall of Fame.

"PBS is delighted to be inducted into the Music Victoria Hall of Fame in our 40th year," said the station's general manager Adrian Basso. "We are very proud of our place in Melbourne’s vibrant music community and thank everyone who has played a part in PBS along the way."