What is your sleep REALLY telling you? Guide reveals the health problems behind insomnia – and the ultimate routine for a good night’s rest

A holistic health expert has revealed what your sleep is trying to tell you about your health – and the exact issues that are keeping you awake at night.

Author and Chinese medicine doctor Nat Kringoudis, from Melbourne, explained the underlying issues that affect sleep patterns, and why difficulty falling asleep could be related to problems with your digestive system.

Waking regularly between 1am and 3am could indicate an overactive liver, while repeated restlessness in the early hours of the morning could be a sign of a weakness in the lungs.

Nat also revealed the ultimate routine for a good night’s rest, including switching off screens at least half an hour before bed, eating dinner before 7pm and setting your bedroom temperature to 23 degrees Celsius. 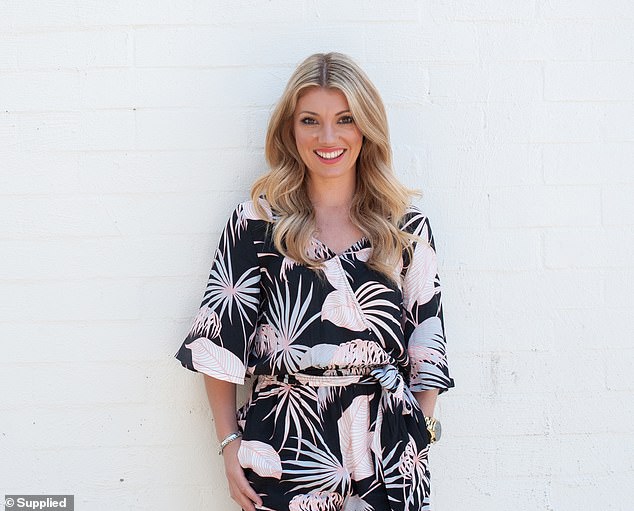 Melbourne-based holistic health expert Nat Kringoudis (pictured) revealed the health issues that cause us to wake at certain times of the night, including an overactive liver, anxiety and digestive problems

The gallbladder plays a key role in digestion by storing bile, which breaks down fats, and draining waste from the liver into the small intestine.

In traditional Chinese medicine, the gallbladder is also said to govern muscle growth and cell renewal.

But if you’re having difficulty getting off to sleep or find yourself waking before 1am, it may be a sign that your gallbladder isn’t doing all it’s supposed to be.

‘If you aren’t sleeping soundly by 11pm, you may find muscle recovery and growth is hindered,’ Ms Kringoudis told Daily Mail Australia.

‘Waking at this time can also be related to emotional issues around indecisiveness and resentment.’

The liver works hardest between the hours of 1am and 3am, detoxifying chemicals and filtering clean blood around the body.

But if the liver is deficient or overactive, which happens as a result of excessive alcohol consumption, you may find yourself restless or waking during this time frame.

In Chinese medicine, liver complaints are connected to anger, frustration and anxiety. 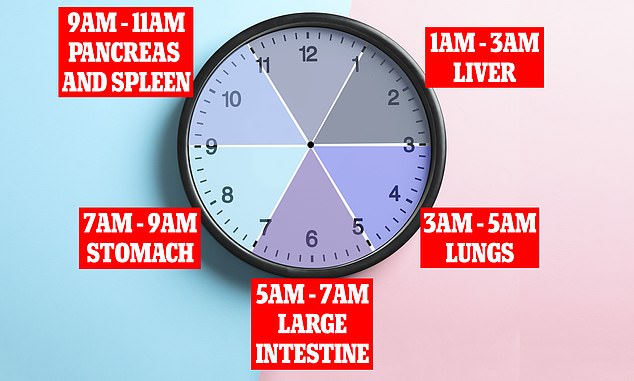 The liver works hardest between the hours of 1am and 3am, detoxifying chemicals and filtering clean blood around the body (pictured). You might wake between 1am and 3am after drinking

Waking in the early hours of the morning between 3am and 5am could be a sign you’re about to catch a cold or flu, according to Ms Kringoudis.

‘Restless or interrupted sleep during this time may indicate sadness or grief needs to be addressed,’ she said.

‘If you wake around this time with a cough, you may be about to fall prey to a cold.’

Waking between 5am and 7am can be a sign of and bowel problems and poor digestion.

‘People often wake at this time urgently needing the bathroom, which is the body’s way of moving along digestion and stagnation,’ Ms Kringoudis said.

Upping your intake of fibre-rich foods, like broccoli, nuts and fruit, increasing hydration during the day and adding good fats like avocado, fish and cheese to your diet can improve overall digestive health.

WHAT IS THE ULTIMATE ROUTINE FOR A GOOD NIGHT’S REST?

1. Introduce wind down time: Start with reducing your exposure to blue light late at night, which means turning off the TV and switching your phone off at least half an hour before bedtime.

Blue light from screens interferes with melatonin levels in the body, which is the hormone responsible for regulating day and night cycles. Light decreases the amount of melatonin produced and tells the body to prepare for being awake.

Switching phones to night mode or wearing blue blocker glasses will reduce the amount of blue light hitting your eyes.

2. Set the temperature: Somewhere around 23 degrees Celsius is considered the optimal temperature for sleep.

3. Eat early: Sit down to dinner before 7pm to give the body time to properly digest your last meal before bed. During sleep, the body is hard at work with cellular repair, hormone production and general recovery, so confine digestion to waking hours to avoid putting your system into overdrive.

4. Hit the hay before 11pm: According to Ms Kringoudis, every hour of sleep before midnight counts as two – so aim to make it to bed between 10pm and 11pm for maximum benefits.

5. Use supplements: Magnesium, melatonin or valerian root tablets, chamomile tea and lavender pillow spray are great additions to a nighttime routine to help you unwind quicker.

A weakness or illness in the stomach can cause you to wake between 7am and 9am with a strong sense of nausea and aversion to food.

‘Waking with a sick feeling in our stomach during these hours is a sure indication that your digestive system needs some TLC,’ Ms Kringoudis said.

Stomach issues may be caused by stress or poor gut health, which can be improved by incorporating probiotics and fermented foods into your diet and reducing your intake of refined sugars and processed meals.

The spleen is responsible for converting food into nutrients which makes energy for the body, while the pancreas also plays a major role in digestion by producing insulin and other important hormones.

But anxiety and stress can play havoc with the digestive system, causing both spleen and pancreas to function well below their normal level.

‘If you are excessively worried, stressed or anxious, your digestion could be affected and you may find you’re prone to needing the bathroom at this time,’ Ms Kringoudis said.

Deep breathing, yoga and meditation before bed can ease worry and anxiety, alleviating nighttime trips to the bathroom.