Tim Severin, a British adventurer who for 40 years meticulously replicated the journeys of real and mythic explorers like St. Brendan the Navigator, Sinbad the Sailor and Marco Polo, died on Dec. 18 at his home in West Cork, Ireland. He was 80.

His daughter, Ida Ashley, said the cause was cancer.

In May 1976, Mr. Severin left Ireland on his most audacious voyage: following in the wake of St. Brendan, a sixth-century monk, who, with a party of other monks, is said to have made a spectacular journey from Ireland across the Atlantic to the “Promised Land” in a leather-wrapped boat.

St. Brendan was a sailor who spread the Gospel in his trips around Ireland, Scotland and Wales. If the tale of his trip to the Americas were true, he would have beaten Leif Ericson and Christopher Columbus by centuries.

After studying an account of the trip — in a medieval Latin text written many years later titled “Navigatio Sancti Brendani Abbatis” or “The Voyage of St. Brendan the Abbot” — Mr. Severin assembled a team of designers and craftsmen, who helped him build a vessel. The 36-foot two-masted boat of oak and ash was covered in oxhide a quarter-inch thick.

The small crew of the boat, called the Brendan, set off from Brandon Creek, on the Dingle Peninsula, on the west coast of Ireland. They sailed north to the Hebrides islands and west to the Faroe Islands on a course for Iceland. Whales visited, day after day, sticking near the boat; Mr. Severin thought they might have mistaken the boat for another whale. 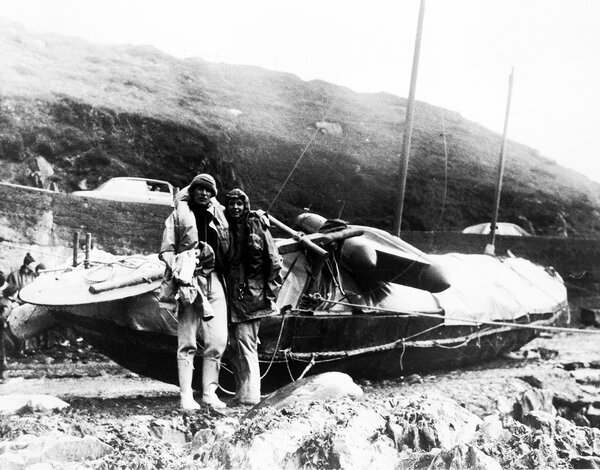 Their arrival in Reykjavik in August 1976 allowed them to scrutinize the condition of the Brendan. After scraping off barnacles, they found that the leather had held. But because of pack ice that would make it impossible to navigate, the crew stored the Brendan, and returned home to await better conditions.

When the crew boarded the Brendan again in the summer of 1977, they headed to Greenland, where they would have to pass through the Denmark Strait, a perilous channel.

“We knew this was going to be the real test of the boat,” Mr. Severin said in a lecture in 2012 at Gresham College in London. “It was inevitable that in the Denmark Strait we’d get terrible weather. But we’d committed ourselves that there was no turning back.”

The Brendan survived the strait but ice precluded making landfall in Greenland, so the Brendan sailed around it. But they soon found themselves shrouded in fog — no one responded to the boat’s emergency radio beacon — then slowed by patches of melting ice in the Labrador Sea.

Finally, on June 26, 1977, the Brendan arrived on the Newfoundland coast.

The purpose of the trip, he said, “was to show that the technology of the Irish monks was capable of reaching North America.” He added that he could not be certain that St. Brendan and his crew had sailed to North America, only that it could have been done.

Mr. Severin, who financed his adventures with book advances and other sources, wrote “The Brendan Voyage,” published in 1978, about the trip.

A review of the book in The Guardian called the journey the “most remarkable sea voyage since Thor Heyerdahl set out to prove that a balsa raft could cross the Pacific.”

Mr. Severin was born Giles Timothy Watkins on Sept. 25, 1940, in Jorhat, Assam, in northwest India, where his father, Maurice Watkins, managed a tea plantation, and his mother, Inge (Severin) Watkins, was a housewife.

Tim’s wanderlust was ignited by his early years in India — where, he said in a 2015 interview on his publisher’s website, “the entire family environment was one of living and traveling in far-flung, often exotic places.” And it grew at boarding school in Tonbridge in Kent, England, where he read adventure books that fired his imagination.

He adopted the Severin surname to honor the maternal grandmother who looked after him in England while his parents were in India.

He earned degrees at Oxford in history and geography. In 1961, while still studying there, he and two other students traced Marco Polo’s caravan route on motorcycles: They started in Venice, then traveled to the Chinese border in northwest Afghanistan, down the Grand Trunk Road in India and completed the journey in Calcutta.

The trip led to his first book — “Tracking Marco Polo” (1964) — and a career of adventuring. To explore the tales of the fictional mariner Sinbad the Sailor, Mr. Severin sailed from Muscat in Oman to China in a replica of an Arab sailing ship. To follow the legend of Jason and the Argonauts and that of Ulysses, he traveled in a replica of a Bronze Age galley.

His other adventures included riding horseback with Mongolian nomads to explore the heritage of Genghis Khan; retracing the British naturalist Alfred Russel Wallace’s path through the Spice Islands in a prahu, a type of sailing boat; and exploring whether a white whale like Moby Dick ever existed.

In his review of “In Search of Moby Dick” (2000) in The New York Times, W. Jeffrey Bolster wrote, “Severin operates at the intersection of imagination, action and myth, as ripe a spot as any for finding a wondrous white whale.”

He wrote more than 20 books — accounts of his journeys and historical novels that drew upon his expeditions.

“Writing about my own travels requires me to be sharper, more precise, more defined in order to recount what happened,” he said in an interview on the website of his publisher when his novel “The Pope’s Assassin” came out in 2016. “By contrast, writing historical fiction is a looser, more evocative process that invokes the imagination and allows the story line to take its own course.”

In his last major trip, he sought the true origins of Daniel Defoe’s fictional castaway Robinson Crusoe on islands where shipwrecks occurred and in Central and South America. His book, “In Search of Robinson Crusoe,” was published in 2003.

In addition to his daughter, Mr. Severin is survived by his wife, Dee (Pieters) Severin, and two grandsons. His first marriage to Dorothy Sherman ended in divorce.

Mr. Severin’s first wife — a specialist in medieval Spanish literature — played a role in his decision to recreate St. Brendan’s expedition. While reading “The Voyage of St. Brendan,” she told Mr. Severin that the story had significantly more practical detail than most medieval texts.

“It tells you about the geography of the places Brendan visits,” he recalled her telling him in the “The Brandon Voyage.” “It carefully describes the progress of the voyage, the time and distances and so forth. It seems to me that the text is not so much a legend as a tale that is embroidering a firsthand experience.”