The 38-year old Liberal MP who resigned from his frontbench position on Sunday after crashing his car while driving at more than twice the legal blood-alcohol limit, knows no other life. 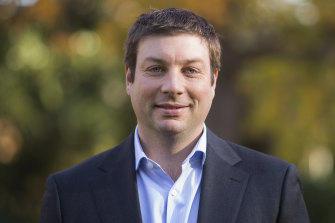 Member for Kew, Tim Smith, who crashed his car in Hawthorn on Derby Day.Credit:Paul Jeffers

This is why his downfall has triggered one of the biggest outbreaks of schadenfreude ever to hit Victorian politics.

Smith is unapologetically ambitious and has no time for ambiguity. He divides the world into those he sees as with him, and those against him.

But it’s that disregard for political nuance that will likely see his career unravel.

His entry into Victorian Parliament just seven years ago was almost as spectacular as his collision in Hawthorn on Derby Day.

Backed by Liberal heavyweights Michael Kroger and Treasurer Josh Frydenberg, the then-30-year-old challenged Mary Wooldridge, a minister in the Napthine government, for the blue ribbon seat of Kew. He won.

The move threatened to cost the state government votes and opened up factional wounds in Canberra. Not that Tim cared.

He did what Wooldridge didn’t have the time, or yearning to do. Worked the phones, wooed branch members, and muddied himself in dirty factional wars. All things he is good at and seems to enjoy. 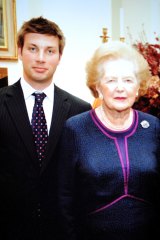 Much of his early career was geared towards notoriety in Liberal circles.

After graduation from the prestigious Scotch College in 2001, Smith attended Melbourne University and was a member of the Australian rowing team. He spent time studying at the London School of Economics before working for several Liberals MPs and ministers including Malcolm Turnbull, Bruce Billson and Victorian Treasurer Michael O’Brien who he recently betrayed.

But it was during the pandemic that he became more widely known with his polarising posts about the state government’s response and lockdown measures. He took on an opposition leader in exile persona, labelling Premier Daniel Andrews a “friendless loser”, “control freak” and a “loony”.

While fiercely loyal to his political allies and friends, he has embraced a similar hard-headed approach to those he views as against him.

When Labor MP Will Fowles went on a rampage at a Canberra hotel, Smith showed little sympathy and repeatedly called for him to resign. When politically expedient he has shown a similar enthusiasm internally for amplifying the personal indiscretions of his colleagues, such as former Upper House member Simon Ramsay, who returned a positive breath test in 2018.

Smith is not politically naive. He knows it will be returned.

Colleagues are rightly speculating about Smith's future within the party. There are those that think he can spend some years on the backbench and take the time he needs to recover. Others argue he has lost all credibility and has denied the Coalition any advantage it may have had on law and order issues ahead of the election.

Most agree it’ll be a long road back.

His political future not only rests on his colleagues but on his conservative base in Kew who will no-doubt be unimpressed by his Power Street prang.

“His political future not only rests on his colleagues but on his conservative base in Kew who will no-doubt be unimpressed by his Power Street prang.”

But while branch members and Smith mull over his future, there is a consensus among Victorian Liberal MPs that Matthew Guy only has one choice, and that’s to distance himself from his former shadow attorney general.

Recent polling by Resolve Political Monitor conducted for The Age shows that the return of Guy has halved the gap between the leaders of the state’s two major parties in the preferred premier stakes.

So far, Guy has avoided paying any transaction cost for rolling a leader mid-term. He has a little over 12 months to woo voters ahead of the election in what is likely to be his last chance at the top job after leading his party to a spectacular defeat in 2018. 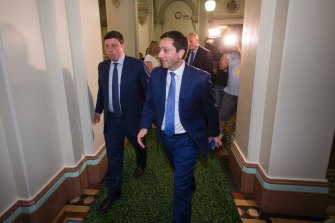 Guy and Smith are close, not just professionally but personally. Smith's groundwork was key to Guy's resurrection as leader and the pair are often joined at the hip during sitting weeks.

But politics is a brutal game and Guy will need to distance himself from Smith if he wants to give himself the best shot at winning the election next year as well as winning the respect of his colleagues.

This isn’t the start Matthew Guy wanted or needed 12 months out from polling day.

Our Breaking News Alert will notify you of significant breaking news when it happens. Get it here.