Some like it hot! Over-confident labourer if left gasping after downing a sachet of the ‘world’s spiciest peanuts’ – and was still lying on the ground with heartburn 90 minutes later

An over-confident workman who boasted it would be ‘easy’ to eat the world’s hottest peanuts was left lying on his back with heartburn after consuming an entire sachet.

Scott Slater, 38, was filmed by work colleagues as he downed the packet of spicy nuts in the middle of a street in Leeds.

A colleague had purchased multiple packets of the spicy nuts online and claimed that they were the spiciest in the world.

Boasting that he’d have no problem downing the nuts, Scott consumed the full sachet in the middle of a street that they had closed to for repairs.

But footage shows that he was soon pouring water over his head, hiccuping uncontrollably and lying on the ground grasping his chest. 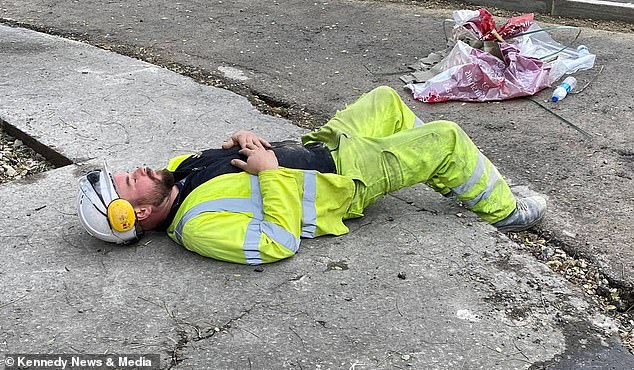 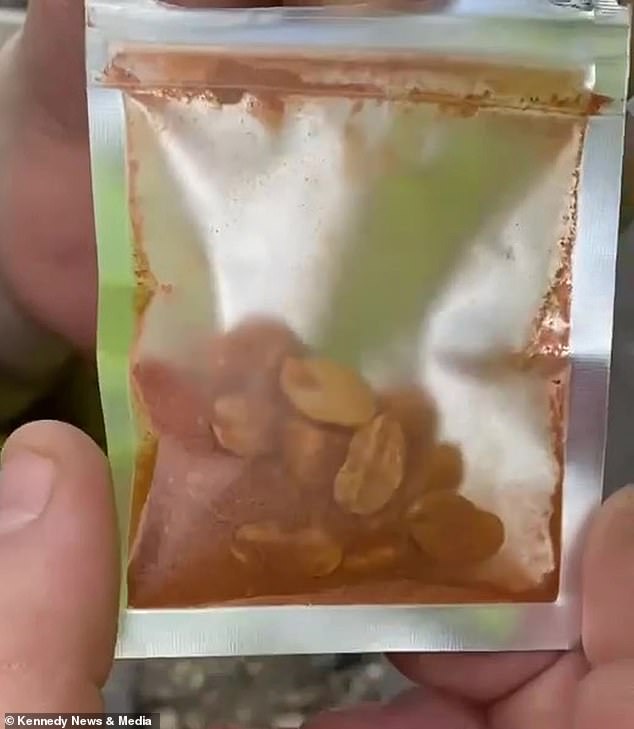 Tradesman Scott Slater, 38, from Leeds, boasted to his colleagues how ‘easy’ it would be to consume an entire sachet of the world’s hottest peanuts (pictured) 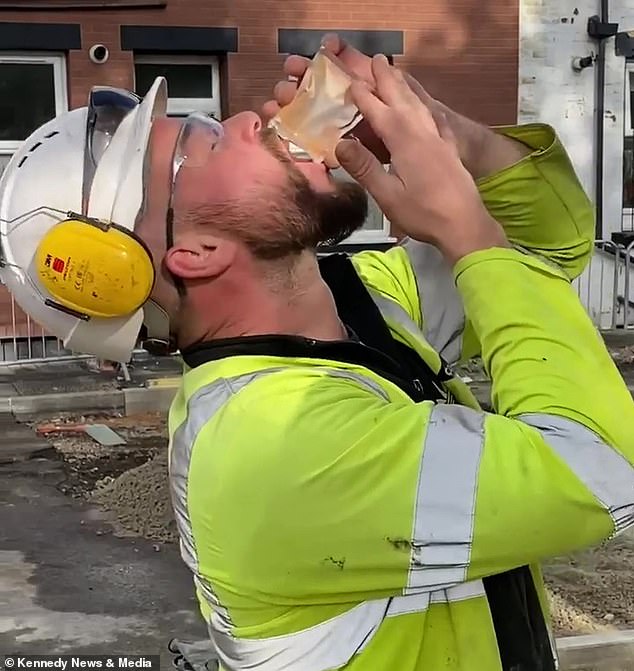 With a grin on his face Scott downs the sachet in one go, even tapping excess flavouring dust into his mouth from the packet

Initially Scott tried to play it cool, saying that the spice was ‘not a problem’ after downing the nuts.

Seconds later though he was left reaching for water as he turned bright red and started to complain about the heat.

With his throat on fire, Scott begins hiccuping uncontrollably before bending over and spitting on to the ground to try and get the taste out of his mouth.

Although trying to style out his discomfort with some posing and posturing, Scott is seen struggling to deal with the spice level. 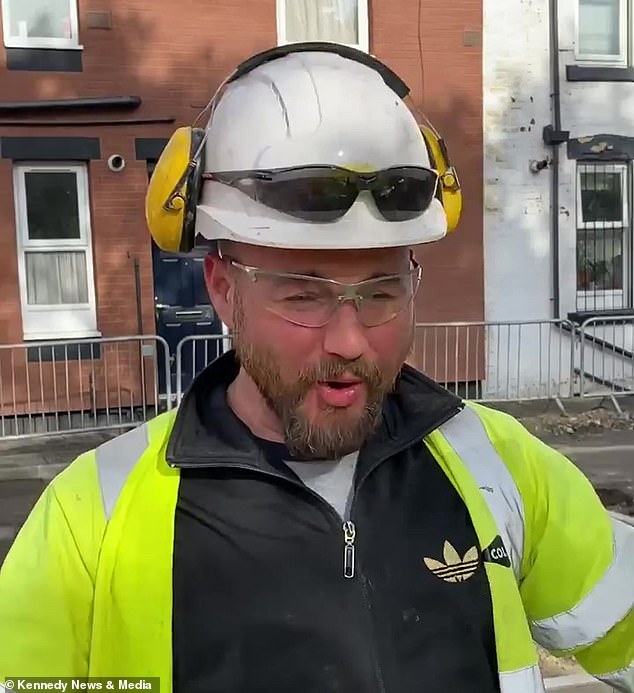 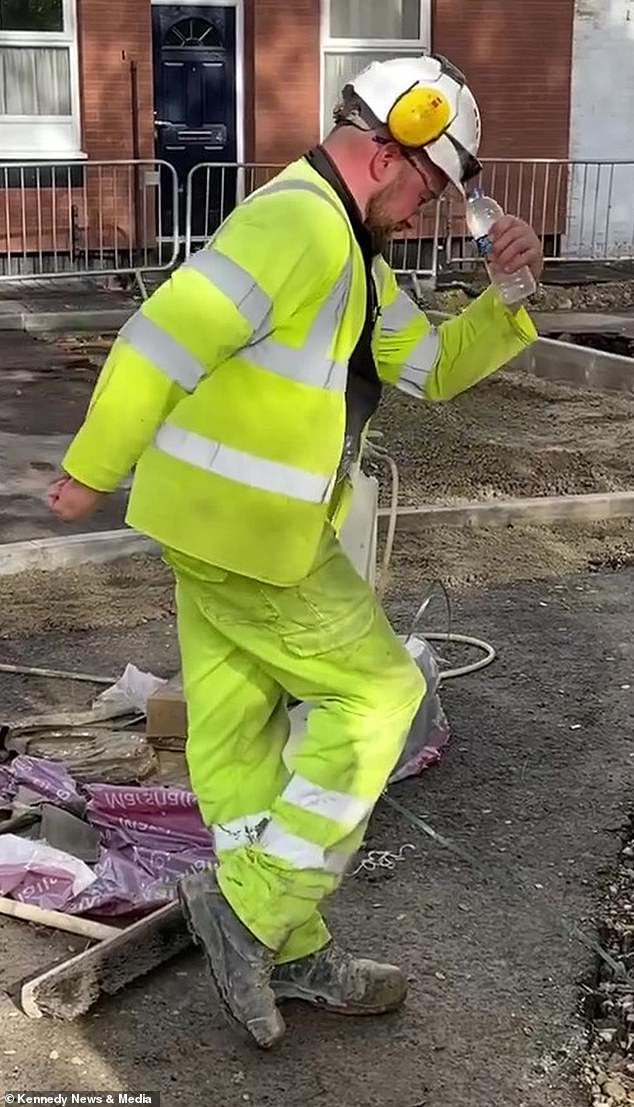 Trying to play it cool Scott starts posing and messing around in the street, which had been closed off for repairs

In a desperate final attempt to cool himself down, Scott removes his hard hat and pours water over his head.

His colleagues, who had three more sachets of the nuts, are met with a firm rejection when they ask if he wants any more.

90 minutes later Scott was seen lying on the floor dealing with heartburn after the peanuts defeated him.

Tom Varey, 37, who filmed the footage, said: ‘We couldn’t stop laughing at him. He’d been so cocky about it beforehand, it served him right. 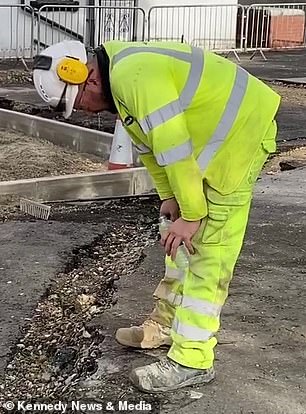 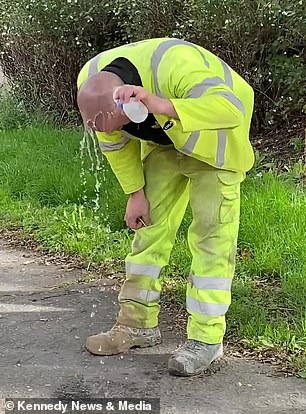 The spice soon catches up with Scott as he doubles over and tries spitting (left) on the ground to get rid of the taste. He then takes his hard hat off and tries pouring water over his head (right)

‘One of the other lads had brought the peanuts in and I’d tried them in the morning. Only two but they’d already burned me. I love hot food like curries but these were too hot for me.

‘He took the whole bag because he thought they were only a little sachet. I started laughing and said he wouldn’t because they were just so hot.

‘I checked with him before that he didn’t have any heart issues because of how powerful they were.

‘He said after they were the hottest thing he’d ever eaten. He really was struggling. It wasn’t just the peanuts though, there was a load of powder in the bottom and he swallowed all of that one go.

‘He had heartburn for the rest of the day. He was able to get back to work but every so often it’d hit him again. He even had to lie down on the pavement an hour and a half later.’

Tom also said that the peanuts were easily the hottest thing he had ever eaten and that after consuming them you could feel your forehead burning.

There are many varieties of spicy peanuts available to purchase on websites online but it is not known exactly what type Scott tried in the video.