A transgender man who lost his campaign to be be described as ‘father’ on his son’s birth certificate has revealed he’s suffered a miscarriage at six weeks after having IVF to fall pregnant with his second child.

Freddy McConnell, 34, who lives in London, discovered that he was pregnant from an embryo transfer in the weeks leading up to Christmas.

Mr McConnell started taking testosterone aged 25 and had breast tissue removed a year later, but never had a hysterectomy to remove his uterus because he had not ruled out wanting children.

Posting on Instagram, the father-of-one said he had begun excitedly imagining the next nine months, but he then discovered that he had suffered a loss at six weeks after having blood tests at a clinic in the New Year. 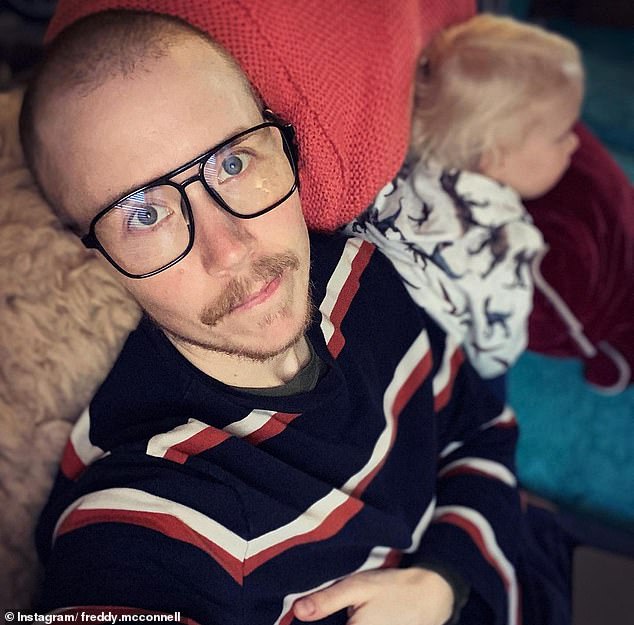 Freddy (pictured) told his 7,000 followers how he had desperately tried to research worrying symptoms including blood loss 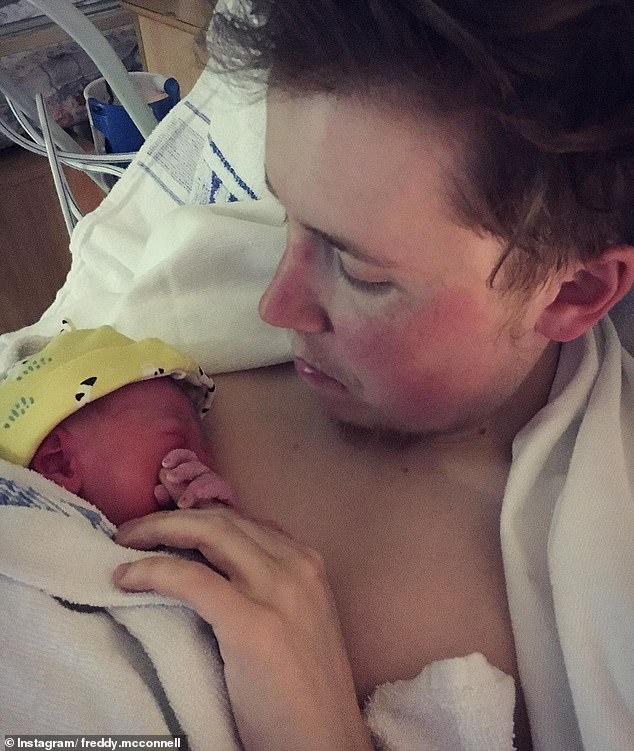 Freddy McConnell, 34, (pictured) who lives in London, took to Instagram to reveal he has suffered a miscarriage at six weeks

Freddy who was able to get pregnant in 2017, was legally male when he gave birth to his first child Jack in 2018.

Having accessed a sperm donor, Freddy stopped taking testosterone to become pregnant and became the UK’s first transgender man to carry and give birth to his own baby.

An appeal to be named ‘father’ on his child’s birth certificate was rejected by Supreme Court Justices in November 2020, because it was seen as not an ‘arguable point of law’.

The journalist who had already lost two rounds of a legal battle, said being forced to be recorded as ‘mother’ breached his human right to respect for private and family life.

Now, he has opened up about losing a baby while pregnant with his second child, saying that ‘pregnancy loss is still a taboo’ and there’s a need to raise awareness of trans fertility. 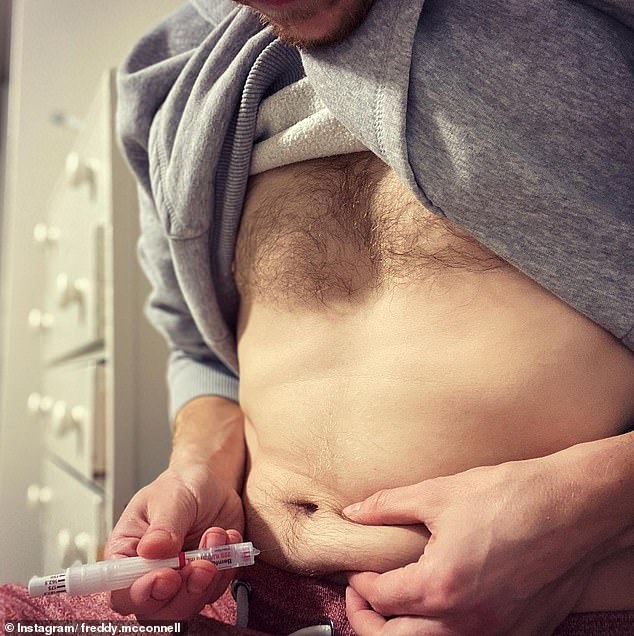 The father-of-one penned a lengthy post sharing the pain of miscarriage, saying: ‘On the first day of my Christmas break, I got amazing news – the best Christmas present – a positive pregnancy test from an embryo transfer I had on 14 December.

‘I was ecstatic and let myself marvel at how perfectly it had gone!? Even better, I felt pregnant. I saw the next nine months unfurling in my mind’s eye. It was exciting to imagine sharing the news with everyone, whenever felt right.

‘Then, between Christmas and New Year, things started to seem… off. I went through a rough week of worrying, Googling, feeling reassured for five minutes and then finding myself back on pregnancy sites and message boards searching the same words in a different order. The inevitable torrent of gendered language that comes with this only amplified the stress of it.

‘Of course, there are no definitive answers to the symptoms and quirks of the earliest weeks of pregnancy. And I’d never experienced anything like it before (pregnancy with Shrimp was textbook) so my own body and memory held no clues.’ 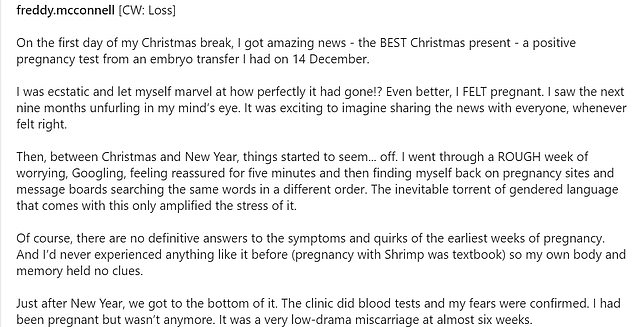 In a lengthy Instagram post, Freddy explained he had a blood test to confirm he had experienced a miscarriage at almost six weeks

Freddy revealed in his recent column for Vice that one of his symptoms included blood loss that he was unable to differentiate from first-trimester bleeding and an early miscarriage.

He grew closer to his mother, stepfather and brother who are his Covid support bubble, while waiting to find out the cause of the conditions.

‘Just after New Year, we got to the bottom of it. The clinic did blood tests and my fears were confirmed. I had been pregnant but wasn’t anymore. It was a very low-drama miscarriage at almost six weeks,’ he continued.

‘I’m sharing all this because that’s what this account is for: making trans fertility, pregnancy and family visible – the joy and the pain, the love and the struggle, the specific and the universal. 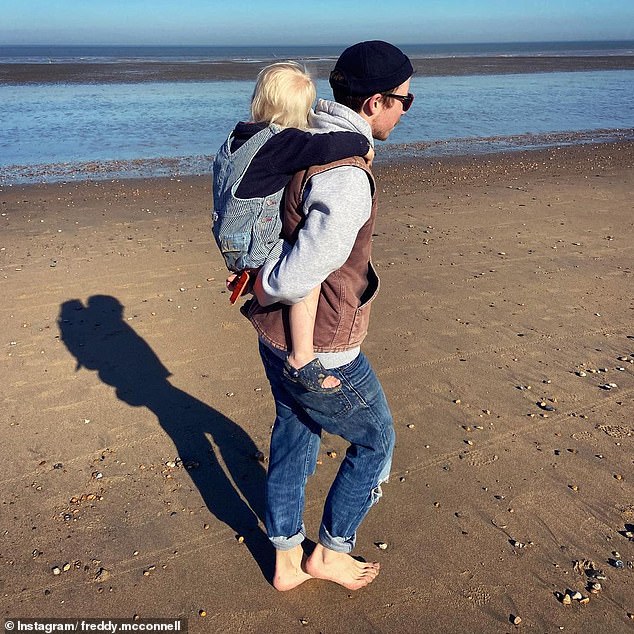 Sharing a photo alongside his first child, Freddy wrote: ‘I’m doing fine. I have everything I need, not least this blondie, who can make everything better with the merest squint and smile. I’ve had days, almost weeks now, to process this. I will go again and I know that the circumstances and stats are still in my favour.

‘For now, I will have a cold beer and we will watch endless amounts of Kung Fu Panda (both the films and TV spin offs, which are surprisingly solid).’

The post racked up over 1,000 comments as Freddy’s followers shared their support.

One person wrote: ‘So sorry Freddy but thank you so much for sharing and opening up so that others feel less alone in their experience. Sending love to you’

‘Any loss is absolutely heartbreaking. We suffered a loss at 30 weeks just before Christmas. We will get back up and jump back on it,’ another said.

A third added: ‘Gah I hate pregnancy forums. I miscarried at eight weeks and spent a lot of time on them before accepting the inevitable. You’re not alone.’ 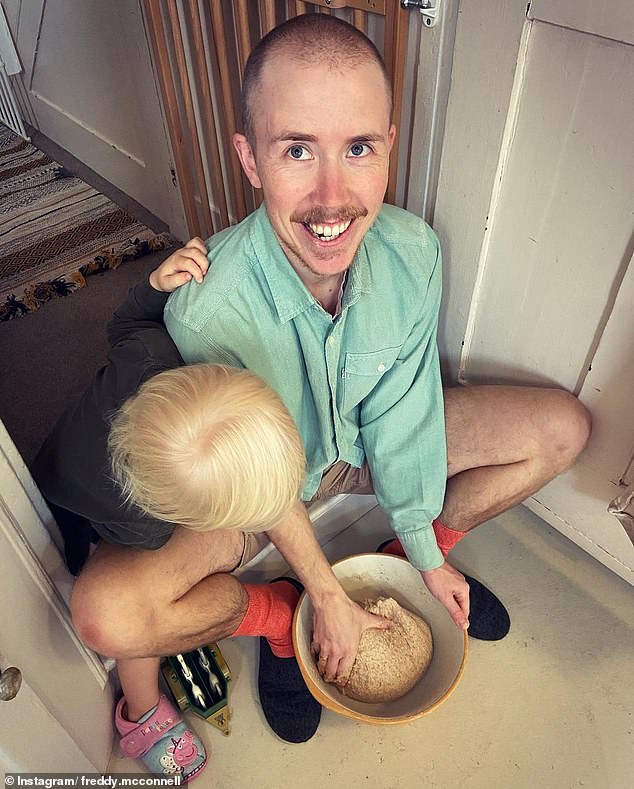 Freddy has admitted that when he first became trans six years ago, the idea of starting a family seemed terrifying and the relationship with his father was affected by his desire to give birth.

He documented his mother’s reaction in moving film Seahorse.

The journalist said he’s come to believe that his body is trans regardless of what he chooses to do with it and it’s an equal right to use his body to fulfil his desire of being a father.

Reflecting on his recent miscarriage, the columnist said he doesn’t see writing a column after discovering he was pregnant and then later having a miscarriage as a ‘failure’, but something that has helped him to process the loss.

Freddy has revealed he has plans to continue sharing articles about his attempts at trying for a second child in the hopes of completing his family before turning age 35.

He added: ‘I love being a dad. I even loved giving birth the first time. But you know what else is great? Feeling free and at home (alone) in my body. So I’ll hold that consolation close’