Heated debate over the best topping for chips divides Twitter – but do YOU prefer cheese, gravy, curry or mushy peas?

A heated social media debate has left people questioning which chip topping they couldn’t live without.

In a Twitter post, Manc UK, shared four varieties of chip toppings – including mushy peas, gravy, cheese, and curry sauce – before saying, ‘you can only save one.’

And responses to the controversial post, which has since been shared over 3.9k, were mixed to say the least.

‘Chips and gravy is a national treasure. Chips Cheese and Gravy is a masterpiece that is too good to be true,’ wrote one, while another penned: ‘I’m not even British and I know the correct answer is chips and curry.’ 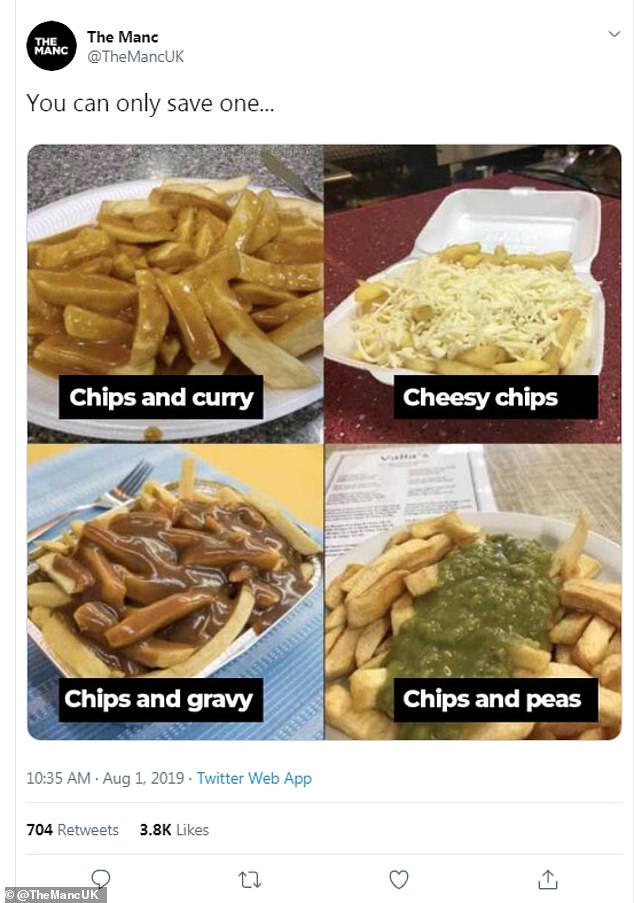 In the initial Twitter post, Manc UK posted four pictures of chips with various toppings and penned: ‘You can only choose one’

The controversial post, which has since been shared over 3.9k, received a mixed reply, with one joking: ‘Chips and gravy is a national treasure. Chips Cheese and Gravy is a masterpiece that is too good to be true’

A quick glance over the initial responses suggests chips and gravy to be the forerunner in the much deliberated debate, but a closer look reveals curry sauce has quite the fan base.

‘Chips and gravy. Us northerners bath in the stuff!’ joked one, while another penned: ‘Chips and curry all day.’

And one user who really considered his reply penned: ‘I class myself as a Northerner so it should be chips and gravy.’

‘However, I have been disappointed with the standard of gravy at some places so I’d go chips and curry (as long as it’s not that sweet stuff).’

Many people voted for chips and gravy, but curry was also a popular topping. ‘Chips and gravy. Us northerners bath in the stuff!’ joked one, while another penned: ‘Chips and curry all day’

Another suggested his decision depends on which region he’s in at the time of the purchase.

‘As a southerner I’d never had them the proper northern way until I visited Liverpool and my god have my eyes been opened,’ he commented.

However, one was unimpressed altogether and asked: ‘Chips and curry ? Who’s doing this?’

Others were left outraged by the mere mention of chips and peas, while the fact the cheese wasn’t melted on another picture also caused quite a stir.

A fourth penned: ‘Are those just chips with shredded cheese – what the hell? while another added: ‘They’re supposed to be melted, this picture is weird.’

However, one waded in on the debate and answered the much-asked question by saying: ‘The heat from the chips melts the cheese c’mon man.’

Meanwhile, others claimed they would rather go without than choose from the four suggestions, while others posed ketchup with salt and vinegar.

‘Bin the lot. Just salt and vinegar on my chips, thanks. (Bit of ketchup on the side if I’m feeling frisky), joked one, while a second wrote: ‘Frankly I’m not convinced any of these need saving.’

Another commented: ‘I choose to save myself by throwing them all away,’ while a further added: ‘Let them all die.’

Others were left unimpressed by the four suggestions, and said they would rather them with ketchup, salt and vinegar