Australian actor Elizabeth Debicki called him "an extraordinary director to work with" this week. British producer Emma Thomas – his wife – said she was "always a little bit nervous" when he showed her a script for the first time given his past movies. And Kenneth Branagh described him as "an artist" that he trusts "absolutely".

The subject: Christopher Nolan, the dapper British-American director whose latest Hollywood blockbuster, the time-bending spy thriller Tenet, holds the hopes of the global cinema industry for a revival from the coronavirus shutdown. 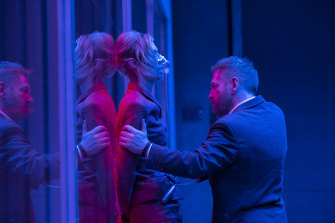 Nolan's record for commercial success is exceptional with the Dark Knight trilogy, Inception, Interstellar and Dunkirk among 10 movies he has directed that have grossed more than $US4.7 billion in two decades.

But as Tenet starts a staggered release around the world – opening first in 70 international territories next weekend then in US cities less affected by COVID-19 a week later – the big question is whether audiences are ready to head back to cinemas.

Disney has already decided they are not, yanking the live-action remake Mulan from a planned cinema release to its streaming service. It will be among the rival Hollywood studios waiting to see how successful Tenet is before deciding whether to release other blockbusters in the coming months, including Wonder Woman 1984 and Black Widow.

"If Tenet does well, it's going to encourage studios to put movies back in the line-up," said one cinema executive who asked not to be named. "If it doesn't perform so well, it could have the opposite effect."

After a series of delays and more than a dash of mystery, Australians will be among the first to see what is Nolan's version of an epic James Bond movie, with a sci-fi twist, in previews this weekend. It stars John David Washington (BlacKkKlansman) as an agent faced with an apocalyptic threat that involves time being reversed.

Hoyts chief executive Damian Keogh said that even with the industry closed in Victoria, the chain had no less than 890 preview sessions of Tenet in 28 Australian cinemas this weekend.

Hoyts Entertainment Quarter in Sydney's Moore Park is screening it in two-thirds of its 80 sessions alone.

"There's a lot of pressure on Tenet," Mr Keogh said. "It's being viewed as a bit of a saviour of the cinema industry but, to me, it really is just a step on the path to recovery."

Rival cinemas will also be dominated by Tenet this weekend, including almost 60 per cent of the sessions at Event Cinemas George Street. 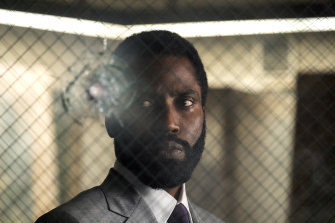 Event's general manager of content, Claire Gandy, described it as a movie that deserved to be seen in cinemas for the immersive experience and expected many patrons would return to watch it again.

"It's a film you need to talk about after watching to fully explore what it is all about," she said.

Mr Keogh believes coronavirus restrictions have affected the confidence of patrons about returning to the cinema.

"But the biggest factor for me has just been the lack of new released content," he said. "Despite some people going to watch Harry Potter, Jaws and Star Wars – the romance of the retro stuff – it really is that new content that drives bums on seats in cinemas."

Patrons can expect cinemas to be 25 to 50 per cent full with checkerboard-style seating to allow social distancing, staggered session times to limit the number of people in foyers, contactless payments and extra cleaning.

While Miss Gandy said Event followed NSW Health advice to wear a mask whenever physical distancing was not possible, Mr Keogh said they were not mandatory at Hoyts.

"We've worked very hard to create the safest possible environment we can for our cinemas," he said. "In a lot of states, community transmission is very, very low if not non-existent."

In a Zoom press conference with Nolan, Thomas and the cast from Los Angeles, the focus was on the movie rather than the impact of the pandemic on Tenet's release.

Debicki said she loved that Nolan had done something "a bit revolutionary" for a female character in a spy movie.

"We get to see a woman kind of really fight for her own kind of freedom but also learn that she has agency within the storyline as well," she said.

The director of Tenet has an exceptional record for commercial success since he broke through with Memento in 2000.

The final instalment of Nolan's Dark Knight trilogy, starring Christian Bale as Batman and Tom Hardy as Bane, is his biggest hit at the box office with $US1.081 billion. 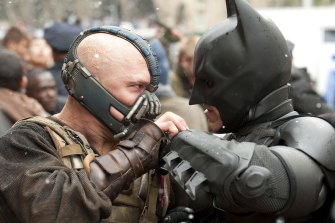 The first sequel to Nolan's Batman Begins (2005), which featured Heath Ledger's triumphant performance as the Joker, also smashed the billion-dollar mark with $US1.004 billion.

An epic sci-fi movie that starred Matthew McConaughey and Anne Hathaway, it took $US677 million on first release and more on re-release.

Winner of three Oscars and nominated for five others including best picture and director, the innovatively told World War II action epic took $US525 million.