Victoria has missed out on federal funding for two signature passenger rail projects but will benefit from billions of dollars more in GST revenue, with the payments expected to exceed pre-pandemic levels.

As Australia’s economy roars back to life, Tuesday’s budget has delivered a cash windfall. The states’ GST entitlement is expected to be $6.4 billion higher in 2021-2022 than estimated in last year’s budget. 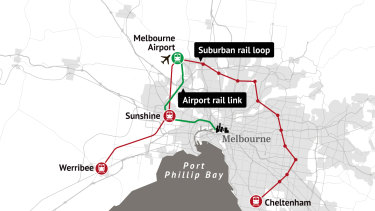 Victoria is forecast to receive 24 per cent of the GST carve-up in the 2021-22 financial year before dropping slightly over the forward estimates. The extra figure amounts to just over $6 billion over four years.

But the state government may be forced to invest its slice of the cash into its $80 billion infrastructure pipeline after the Metro Rail Tunnel and the Suburban Rail Loop missed out on federal funding in the latest budget.

Earlier in the week, the Andrews government indicated it wanted the federal government to help fund its most expensive rail project, the Suburban Rail Loop, which will allow commuters to travel around Melbourne without having to transfer at CBD stations.

Transport Infrastructure Minister Jacinta Allan said she would welcome “every dollar that’s invested in transport infrastructure” by the Commonwealth.

Victoria has not supplied a business case, passenger estimates or detailed costings for the project, which is estimated to cost about $50 billion.

Instead of the Suburban Rail Loop, Treasurer Josh Frydenberg splashed $3 billion on road and other rail projects in his home state. Most of the cash, $2 billion, is to be spent on a freight terminal.

The terminal is conditional on the Victorian government matching the amount. Mr Frydenberg has warned “funding for these shovel-ready projects will be provided on a use it or lose it basis”.

The terminal, which will accommodate future inland rail services using double-stacked trains, will be located at Truganina in Melbourne’s west or Beveridge, north of Melbourne.

The Victorian government welcomed the Commonwealth contribution but wants the inter-modal terminal built in the city’s west, as does the state opposition.

Tuesday’s budget also included $500 million to reduce congestion on the Monash Freeway, $30 million for upgrades to the the Western Port Highway and $20.7 million to improve the Princes Highway between Colac and the South Australian border.

In his budget speech, Mr Frydenberg said Canberra’s infrastructure commitments totalled $110 billion to be spent over the next decade.

“Our economic plan capitalises on the opportunities that will exist on the other side of this crisis,” he said. “Building the infrastructure our economy needs for the future.”

The federal government will also invest millions in water infrastructure projects, including $11 million for the final stages of the Werribee Irrigation Modernisation project and $5.5 million for a recycled water project on the Bellarine Peninsula.

Victorians who have had a career break or are at risk of unemployment will be offered free career counselling and help to re-enter the workforce or advance their careers as part of the federal government’s mid-career checkpoint program, which will be expanded to Victoria.

The program is open to all Australian workers aged 30 to 45 but is primarily aimed at women who have taken time out of the workforce to care for their children.