Voters have revealed their frustration with Prime Minister Scott Morrison after weeks of argument over the vaccine rollout and new virus outbreaks, reversing months of support to cut his net performance rating to minus 1 per cent.

The federal government has also lost ground in a setback for both the Liberals and the Nationals, with Deputy Prime Minister Barnaby Joyce registering an extraordinary net likeability rating of minus 29 per cent soon after regaining his position as Nationals leader. 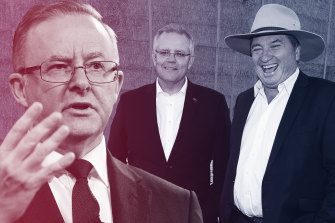 Voters have revealed their frustration with Scott Morrison in a new survey after weeks of argument over the vaccine rollout and new outbreaks.Credit:Alex Ellinghausen

In the Resolve survey one month ago, former Nationals leader Michael McCormack was viewed positively by 11 per cent and negatively by 17 per cent, resulting in a net negative rating of minus 6 per cent. Another 36 per cent were neutral and 36 per cent were unfamiliar with him.

The findings are contained in a new survey that shows a decline in primary vote for both major parties over the past month, with the Coalition falling from 40 to 38 per cent and Labor falling from 36 to 35 per cent.

The Resolve Political Monitor, conducted for The Sydney Morning Herald and The Age by research company Resolve Strategic, reveals a sharp decline in voter satisfaction with Mr Morrison alongside the blow to his party.

But Mr Morrison held a clear lead as preferred prime minister, favoured by 45 per cent of voters compared to 24 per cent for Labor leader Anthony Albanese, with only marginal changes since the last survey.

Another 31 per cent of voters are undecided between the two party leaders and 27 per cent are “uncommitted” with their primary vote, highlighting a volatility amid COVID-19 outbreaks, lockdowns and concerns about the vaccine rollout.

“The significant drops in Scott Morrison’s performance rating over the last two months tell us that voters are reassessing him,” said Resolve director Jim Reed.

“This is all about COVID – the recent outbreaks, the vaccine rollout and financial support.”

The swing came at the same time voters marked down Mr Joyce, who was restored as Nationals leader four weeks ago with a promise to colleagues he could boost the party’s fortunes.

Asked their view of Mr Joyce, 45 per cent of voters said they had a negative view of him, compared to 16 per cent with a positive view, producing a net likeability of minus 29 per cent. Another 31 per cent were neutral and 7 per cent were unfamiliar with him.

Support for the Greens rose from 10 to 12 per cent and support for independents slipped from 8 to 7 per cent, while Pauline Hanson’s One Nation rose marginally from 3 to 4 per cent.

“The Resolve Political Monitor provides a suite of minor party and independent options in our primary vote measure, just like the real ballot paper. Given this, it appears that Coalition voters have moved to One Nation and others, rather than to Labor,” Mr Reed said.

Because the survey asked voters to nominate their primary vote in the same way as they filled in their ballot papers for the lower house at an election, there is no “undecided” category in the results, a key difference with some other polls.

As well as asking about primary vote support, Resolve asks respondents whether they are likely to change that support in the months ahead. The proportion of uncommitted voters has climbed from 21 per cent in April to 28 per cent in June and 27 per cent in July.

Mr Reed said this suggested voters were reassessing parties and their leaders, a heightened volatility borne out by the fall in support for the Coalition and Mr Morrison.

All changes in primary vote were within the margin of error. The Resolve Political Monitor was conducted from July 13 to 17 and asked 1607 voters about their views in online questions put in a random order to avoid a “donkey vote” with the results. It has a margin of error of 2.5 per cent.

The number of voters who said Mr Morrison was doing a good job slid to 45 per cent from 48 per cent one month ago, while the number who said he was doing a poor job rose from 40 to 46 per cent.

Voters also marked down Mr Albanese, whose net performance rating fell to minus 16 per cent compared to minus 13 per cent in the last survey.