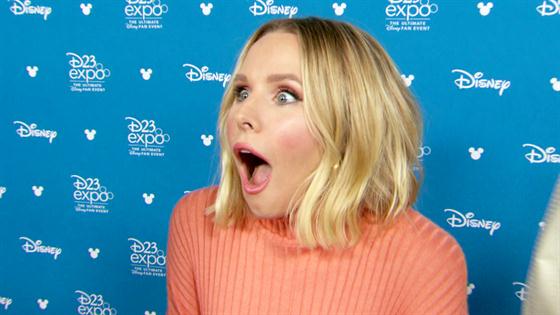 Some performances are just worth melting for.

On Wednesday, the cast of Disney’s Frozen 2 went into the unknown for The Late Late Show for a Frozen edition of “Crosswalk the Musical,” where host James Corden and his Late Late Show theater troupe are given seconds to pull off Broadway-level performances on a crosswalk in the middle of a crowded Los Angeles intersection. Joining the group this time around were Kristen Bell (Anna), Idina Menzel (Elsa), Josh Gad (Olaf) and Jonathan Groff (Kristoff)—and it’s safe to say that they stopped traffic with their performance.

“Since we performed the iconic Les Miserable in Paris, people keep coming up me saying, ‘James, when are you going to take this further? When will we see the company doing Madama Butterfly, La Traviata, Così fan Tutti?'” James said into the camera. “I look them in the eye and say, ‘Screw that! We’re doing Frozen.'”

Before jumping into the first number, James gave everyone their parts. Kristen, Jonathan and Josh each played their characters from the movie, but there was an unforeseen toss-up for Elsa.

The late night host announced, “And the role of Elsa, the frozen queen with a voice that echoes throughout the heavens will be played by, I mean, come on? Who else, but James Corden!” Much to Idina’s surprise, she landed the role of Sven the Reindeer instead!

To ensure that the Frozen cast and the Late Late Show theater company were ready for the grueling task of performing on the crosswalk, James had them undergo a series of challenges—starting with pelting them with snowballs so they wouldn’t break character.

Finally, it was time to hit the streets. Dressed as their beloved characters, the cast kicked things off with “Do You Wanna Build Snowman?” Despite pulling off the performance perfectly, the troupe felt that Idina needed to reprise her role as Elsa. This, of course, led to an epic sing-off between the Wicked star and James.

Watch the James and the Frozen cast sing “For The First Time in Forever,” “Let It Go” and more in the hilarious video above!

E! News returns weekday mornings at the beginning of 2020!