When West Yorkshire Fire and Rescue Service Deputy Chief Fire Officer Dave Walton got home, he and his partner both asked “What the hell just happened”. The pair had been responding to the fires and searing temperatures higher than 40 degrees that swept across the UK this week.

Walton said Wednesday, UK time, had been a game changer – it highlighted the challenges the country’s firefighting fleet will face as climate change continues to cause more intense and frequent extreme weather events. 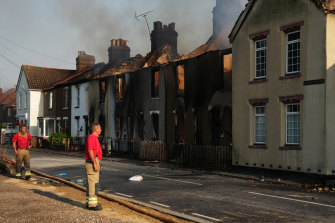 Fire crews at the blaze in Wennington, a small village in the county of Essex.Credit:Getty

Former NSW Fire and Rescue commissioner Greg Mullins has been to the UK four times in the past 15 years, providing advice to fire chiefs about managing and responding to fires. He said he never thought he would see the day when London would be ablaze, but it highlighted the need for greater climate adaptation.

“The UK have no history of [fires] at all. Their systems and processes are built for urban fires, their uniforms are too hot, their trucks don’t carry much water,” he said.

“They have fundamental organisational issues they have to deal with. [English fire authorities] have been looking at [the risks] for decades, they knew it was coming up on them like a freighting train. They are not used to fast-moving fires, they are used to statics fires in factories or buildings.”

He added while the UK could learn about fighting fires from their Australian counterparts, the difference in landscapes posed a challenge.

“I think this is another wake-up call for everyone. We need to start adapting and take urgent action on reducing emissions,” he said.

As blazes continue to sweep across Europe, Australian firefighters could be deployed if the call for help comes from overseas. No formal request has been made yet.

The UK has emerged from a week of extreme heat and fires that saw airport runways melt, 15 major blazes sweep the country and a dozen firefighters injured.

The country set a record for hottest temperature, with eastern England sweltering through 40.3 degrees on Tuesday. By lunchtime, 29 locations in the UK had broken similar temperatures. Temperatures will ease for the remainder of the week – with London to see 26 degrees on Thursday.

“This is not normal; these are exceptional times,” London Mayor Sadiq Khan told BBC News.

Stephen Belcher, chief scientist of the Meteorological Office for the UK, said in a video statement. that “it’s virtually impossible for the UK to experience 40 degrees celsius in an undisrupted climate”. “Climate change, driven by greenhouse gases, has made these extreme temperatures possible – and we’re actually seeing that possibility now,” he said.

Meanwhile, firefighters in Greece struggled to contain new fires on Wednesday around Athens and countries in southern Europe took stock of the damage caused. Cooler weather gave firefighters in Spain and Portugal some respite, but temperatures are forecast to rise back to 40 degrees in the coming days.

Councillor with the Climate Council and Macquarie University biology professor Lesley Hughes said the scenes out of Europe were shocking, but it was what scientists had been warning would happen as climate extremes worsen.

“These extreme climate conditions kill people, it kills wildlife, it damages ecosystems. It shows we are really not prepared. We need to address the root causes of the problem such as reducing greenhouse gases. We have to stop burning fossil fuels as soon as possible and take mitigation action,” she said.

“We’ve got to approach these events not as a one-off, highly unusual once in a lifetime or once in 500-year event. We need to start approaching them as examples of what we might see in the future.”